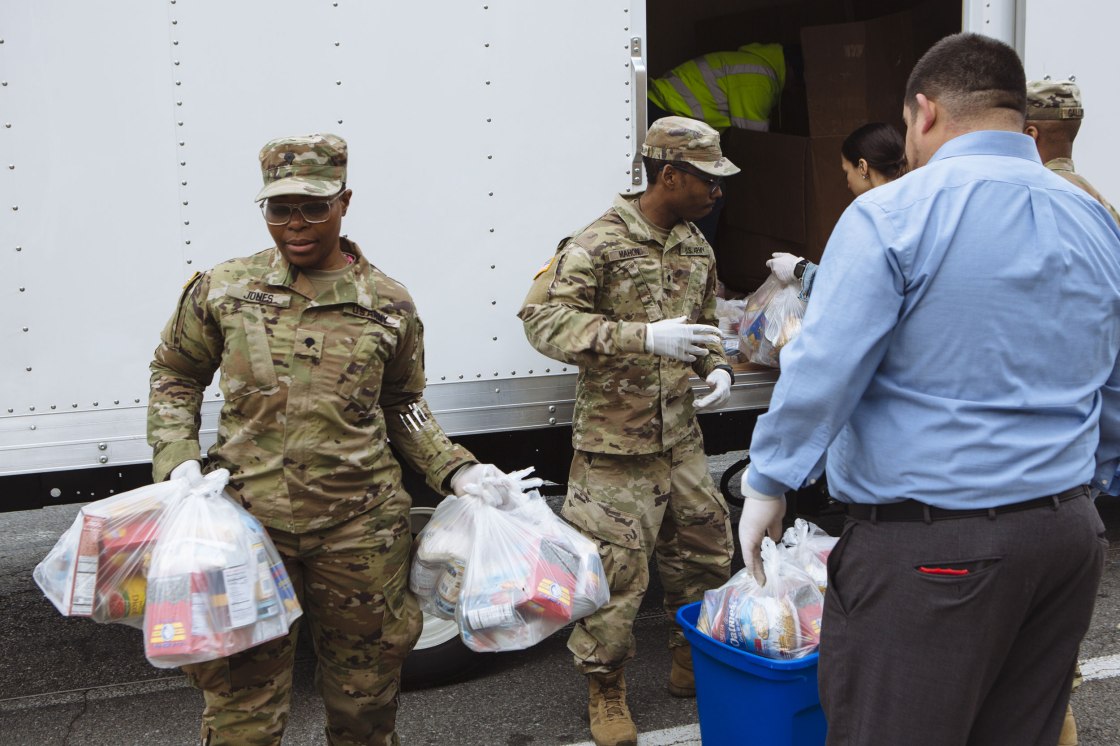 (CNN) — President Donald Trump said Tuesday that his administration was “starting the process” of having the US Army Corps of Engineers assist New York in its response to the coronavirus pandemic, an action sought by the state’s governor Andrew Cuomo, but suggested that no final decision had been made.

Asked at a news conference Tuesday if he would support that request, Trump said, “We’ve been asked to …Yes we’re starting to. We’re starting the process, we hope it’s not going to be necessary but it could be necessary, the state is working on it very hard themselves but we’ll probably supplement.”

“The Army Corps of Engineers is ready, willing and able, we have to give them the go ahead if we find that it’s going to be necessary, we think that we can have quite a few units up very rapidly,” Trump added.

“I’ve worked with Gov. Cuomo and … we’re talking to California about different sites,” he went on to say.

As the outbreak has spread, politicians including Cuomo and Democratic presidential candidate Joe Biden have been asking why the military has not been doing more to help. On Monday the Pentagon said it “is ready and willing to support” US civilian authorities but suggested any assistance would involve trade-offs.

Trump met yesterday with the Commander of the Army Corps of Engineers, Lt. Gen. Todd Semonite.

“The President directed us to work with the Department of a defense, there’s two ways that DoD could be helpful in terms of expanding medical capacity,” Vice President Mike Pence said while appearing alongside Trump.

“I know the governor of New York has asked us to look at the Army Corps of Engineers which could perhaps renovate existing buildings but the President also has us inventorying what you all would understand as field hospitals or MASH hospitals that could be deployed very quickly,” Pence added.

Pence said “The President has tasked us to evaluate and to make available and to consider every request from governors for either field hospitals, expanding facilities, or the Army Corps of Engineers which could retrofit existing buildings.”

On Sunday Cuomo penned an op-ed in The New York Times asking for the military to have the Army Corps of Engineers build hospitals to alleviate the burden on civilian hospitals.

“This is exactly what they do. Deploy the Army Corps of Engineers to come work with states to build temporary medical facilities. Get us backup beds so when the hospital is overwhelmed, we can have some of the people who are in the hospital beds go to a backup medical facility,” Cuomo said at a news conference Monday.

“If you don’t do it, you know what is going to happen: You’re going to overwhelm the hospitals,” he added.

Secretary of Defense Mark Esper suggested later on Tuesday that such support could take time.

“The Corps of Engineers does not build projects, they contract others to build the projects. So my hunch is it will probably be quicker if it’s done at the state or local level,” Esper said at a Pentagon press conference.

“Nevertheless I don’t mind offering up the Corps of Engineers to come to a state to talk to whoever a governor wants them to speak to about with regard to renovating buildings or whatnot to see if we can do it quicker, we should — we’re prepared to do that but I think at this point the key is speed but again I need to have those conversations with the governors and others,” he added, saying he planned to speak to Cuomo.

The Corps said Tuesday that it was aware of Cuomo’s request for it to build temporary hospitals but said that no formal request has been made.

“The US Army Corps of Engineers is prepared to assist the nation in a time of crisis to the very best of its capabilities, and we are postured to lean forward when an official request is received through the Department of Defense,” a spokesperson for the Army Corps of Engineers said in a statement to CNN, adding “as a precautionary measure, USACE has begun assessing our capabilities in this area in conjunction with our partners.”

“USACE does have the capability and experience in medical facilities construction,” the statement added, while saying “At this time, however, USACE has not been assigned a COVID-19 support mission.”

Defense officials have said that any military support to respond to the outbreak will involve sacrifices.

Decisions will be “informed by the facts of what is possible and what is not and what those trade-offs are,” Pentagon spokesman Jonathon Hoffman said Monday.

Esper also said it could take weeks to call up National Guard or Reserve forces to support the coronavirus response.

However the Pentagon is taking steps to enable the possibility of bringing more military assets to bear in the coronavirus fight, including the readying of US Navy hospital ships for a possible deployment.

Gen. Mark Milley, the chairman of the Joint Chiefs of Staff, is preparing to sign orders that could lead to the deployment of both of the US Navy’s hospital ships and a mobile hospital facility according to two defense officials. The two hospital ships are the USNS Mercy, currently in port in San Diego and the USNS Comfort in Norfolk, where it is undergoing maintenance.

The third part of the expected so-called “warning order” is a Navy Expeditionary Medical Facility, which is a mobile field hospital that has full resuscitation and emergency stabilizing surgical capabilities.

According to the Navy website the facility is “designed to be assembled and operational in 10 days,” as a self-sustaining medical facility.

Esper referred to the hospital ships Tuesday noting, “We have already given orders to the Navy a few days ago to lean forward in terms of getting them ready to deploy. They provide capabilities.”

A warning order from Milley will then formalize the process and lead to decisions on calling up active duty any troops or other medical care organizations to man the ships. Activating the Expeditionary Medical Facility could lead to Seabees, the Navy’s expeditionary combat engineers, being called in to build the hospital.

But staffing the ships and hospital remains a challenge. “All of those doctors and nurses either come from our medical treatment facilities or they come from the Reserves, which means civilians and so what we have go to be very conscious of and careful of as we call up these units and use them to support the states that we aren’t robbing Peter to pay Paul,” Esper said. “What I don’t want to do is take reservists from a hospital where they are needed just to put them on a ship somewhere else where they are needed.