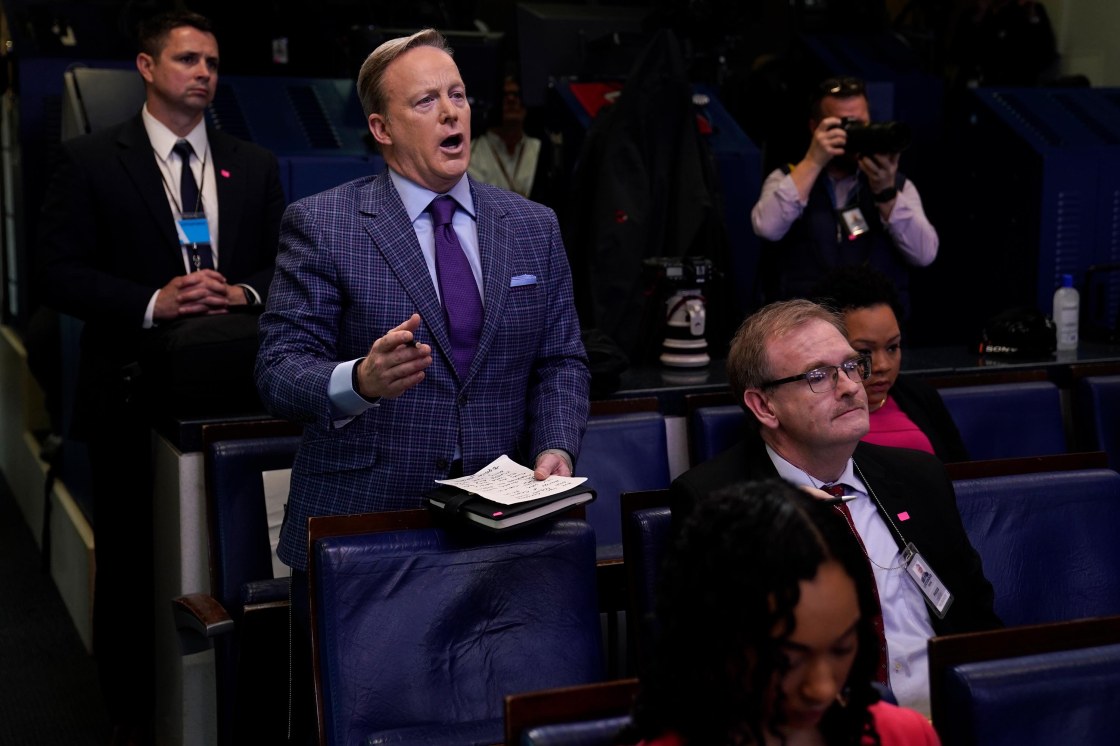 (CNN) — Former White House press secretary Sean Spicer made a surprise appearance on Friday in the briefing room he once oversaw — but this time, on the other side of the lectern.

Spicer, who hosts a show on Newsmax, appeared to become the first former White House press secretary to question the President that they once served from the briefing room.

“Yeah please, in the back?” President Donald Trump said during Friday’s coronavirus briefing, pointing to Spicer sitting in the last row of the briefing room with a press pass, but not addressing him by name.

Spicer asked about small businesses, with Trump responding that the government would be “helping them a lot,” and about accusations that members of Congress used briefing information to inform stock trading, of which Trump said he was “not aware” before calling the senators in question “very honorable people.”

Prior to the briefing, Spicer passed through the room, waving — a marked shift from his antagonizing attitude toward reporters when he dealt with the White House press.

Before his resignation in July 2017, Spicer was repeatedly thrust into a combative role and served on the front line of the administration’s frequent crusades against the media.

During his time as press secretary, Spicer famously weighed in on crowd size at Trump’s inauguration. Spicer was ordered by the President to take to the briefing room on his first full day in office to lambast the media for coverage of the size of the crowd that attended Trump’s inauguration — a moment that quickly defined Spicer’s public-facing relationship with the press.

“This was the largest audience to ever witness an inauguration, period,” Spicer said, contradicting all available data. He also baselessly alleged that some photos were “intentionally framed” to downplay Trump’s crowd.

Spicer, since resigning as press secretary, has said he “absolutely” regrets the incident and has been actively working to rehabilitate himself in the public eye.

Friday’s briefing appearance was hardly Spicer’s first brush with post-White House publicity. In August, he joined the cast of Dancing with the Stars, prompting the show’s host Tom Bergeron to joke that “the nice thing is Sean will be in charge of assessing audience size.”

Spicer famously danced a salsa in a frilly neon lime green shirt before being eliminated from the show in November.