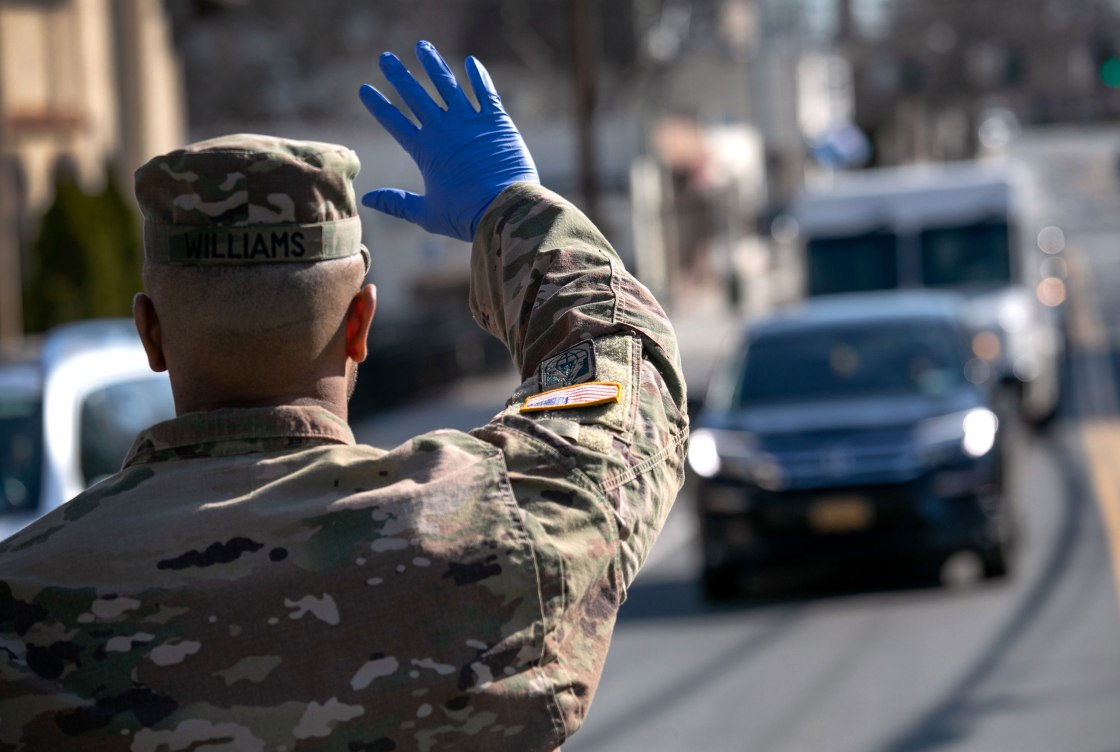 US surgeon general warns ‘this week, it’s going to get bad’ as hospitals struggle to keep up with new coronavirus cases

(CNN) — The war against coronavirus has intensified across the country as more workers are laid off, medical supplies dwindle, and states enact new rules to get Americans to stay home.

“We really, really need everyone to stay at home. I think that there are a lot of people who are doing the right things, but … we’re finding out a lot of people think this can’t happen to them.”

More than 38,000 Americans have been infected with coronavirus across all 50 states, and at least 415 people have died.

The federal government has activated the US National Guard in three of the hardest hit states — California, Washington and New York. Almost half all US cases — 20,875– are in New York state.

President Donald Trump said National Guard units deployed to California, Washington state and New York will remain in the command of those governors.

The deployment comes as more than 100 million people in at least eight states face orders from their governors to stay home.

It’s part of the attempt to control the deadly virus and prevent a catastrophic overload of the US healthcare system.

‘A point where people can’t be saved’

New York City’s 11 public hospitals will only be able to get through this week before they start reaching “a point where people can’t be saved,” Mayor Bill de Blasio said Monday.

“If we don’t get ventilators this week, we are going to start losing lives we could have saved.”

Many are calling for Trump to fully use the Defense Production Act to ensure the necessary supply of medical equipment.

The 1950 law gives the president the ability to force factories to produce key equipment and allocate resources where they are needed. President Trump invoked the bill last week, but said he does not plan to use it.

On Monday, Sens. Chris Murphy of Connecticut and Brian Schatz of Hawaii are introducing a bill to require the president to fully use the Defense Production Act.

The bill would require the President to ensure the production of at least 500 million N95 respirators, 200,000 ventilators, 20 million face shields, 500 million pairs of medical gloves and 20 million surgical gowns.

Even GOP Sen. Lindsey Graham, a Trump ally, said the US needs to go “all in” with increasing medical supplies.

“Anything that can provide relief to the frontline troops, do it,” the South Carolina senator said. “Be all in on the medical supply front.”

Since hospitals are about to get overwhelmed, authorities are redoubling efforts to get the public to stay home — especially since coronavirus is easily transmitted between people who don’t even know they have it.

Americans should stay at least 6 feet away from others and avoid crowds, health officials say. Yet people keep ignoring that guidance.

Sun worshipers have been flocking to beaches. Young people have been gathering at parks as many schools are now closed.

So more states are enacting strict stay-at-home orders. California, Illinois, New York and New Jersey were already practicing them over the weekend.

Ohio, Louisiana and Connecticut joined that list Monday. A similar order goes into effect in Delaware on Tuesday.

The orders stress the need for social distancing and say people need to stay home, with exceptions made for grocery shopping, getting medicine and going to work at essential jobs.

People can still go outside and be active, as long as it’s done at a healthy distance from others.

Violating the orders could result in fines in states like New York and Connecticut.

“There will be a civil fine and mandatory closure for any business that is not in compliance,” New York Gov. Andrew Cuomo said.

While testing has become more available, there are still challenges — and increased strain on the healthcare system.

About 254,000 Americans have been tested, Vice President Mike Pence said Sunday. That total does not include local hospitals or local health care labs, he said.

But increasing testing has put pressure on dwindling medical supplies and increased the possibility of exposure in medical facilities.

In some places, authorities have decided to test only high-risk patients or those whose results would significantly change the course of treatment.

While the US plays catchup with widespread testing shortages and delays, cities are getting creative in helping expedite testing.

The city of Los Angeles is implementing a new web portal that would direct those who might be at highest risk to a testing center.

That’s why new outbreaks in nursing homes have families riddled with anxiety.

At least 41 cases are linked to Briarwood Nursing Home in Little Rock, Smith said. Residents accounted for 35 of those cases, and staff members for six.

Gov. DeSantis said the Florida facility did not take precautions against the virus, allowing staff who hadn’t been screened for symptoms to freely enter the building. But Atria disputed the governor’s claims.

The first known nursing home outbreak was at the Life Care Center in Kirkland, Washington. The center is linked to 35 deaths from coronavirus.