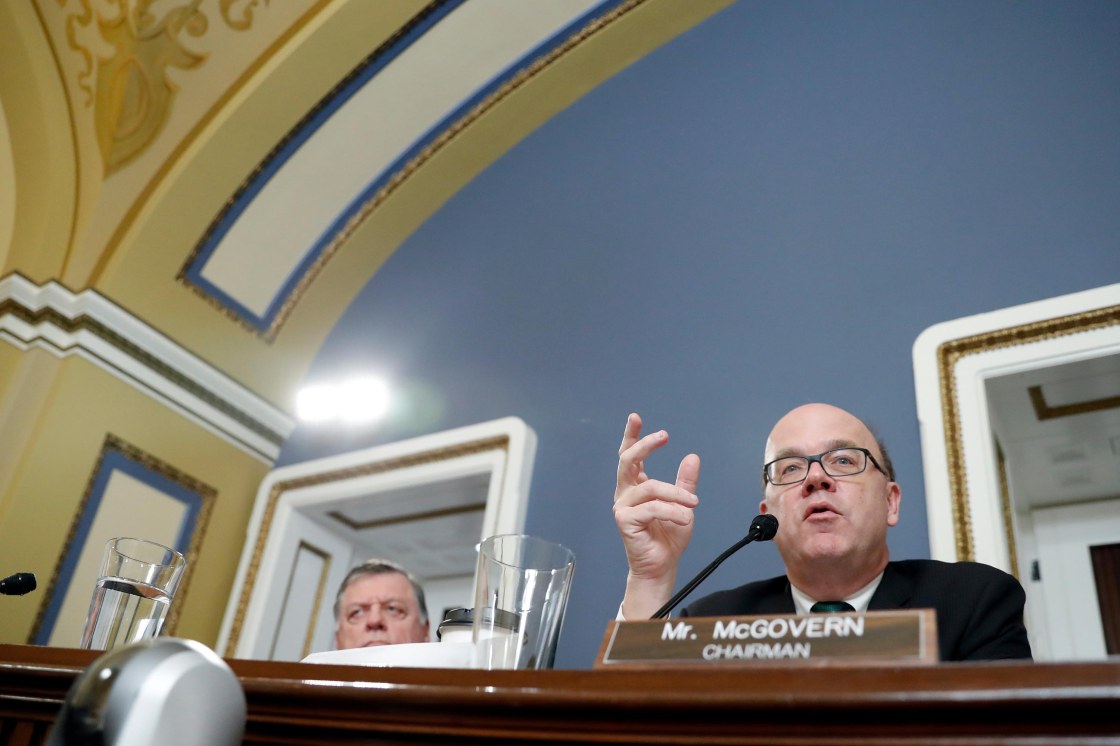 The House of Representatives is taking a key step toward allowing members to vote remotely amid the coronavirus pandemic, with a powerful Democratic chairman recommending a temporary change that would allow lawmakers to let other members vote on their behalf and at their direction if they cannot appear in person.

The recommendation by House Rules Committee Chairman Jim McGovern, delivered to members on a Democratic caucus call Thursday afternoon, could set the stage for a historic change in the procedures of the chamber — but it would require wide support from both parties to approve with members away from Washington.

After studying the issue and consulting with lawmakers for several weeks, McGovern told lawmakers the House should allow members to vote “by proxy.”

That means lawmakers would choose another member who would appear in person and vote on his or her behalf. Doing so would significantly reduce the number of members present in the chamber during a vote and allow members who are unable or unwilling to travel across the country to still cast a vote.

“This is an extraordinary set of circumstances that we find ourselves in,” McGovern, a Massachusetts Democrat, told CNN in an interview Thursday. “We need to function during these difficult times.”

McGovern’s proposal amounts to a middle ground between those who don’t want any changes to House procedures and others who want full-on remote deliberations, with video technology and the ability to cast votes themselves from wherever they are.

Democratic leaders have expressed security concerns about remote work. Proxy voting would sidestep those qualms. Under the proposal, if members can’t appear in the Capitol, they would provide a “specific instruction” to another House lawmaker to cast the vote in the chamber on their behalf.

“A Member casting a vote on behalf of another Member would be required to have exact direction from that Member on how to vote and would have to follow that direction,” McGovern said in a statement about his recommendation.

McGovern told CNN the “temporary” change would occur for a “finite” period of time under “very, very strict” circumstances like the current pandemic — and would not amount to a permanent change in procedures.

He said he has been consulting with House Speaker Nancy Pelosi, who has been open to the proposal. To enact the change, Pelosi would have to reach a deal with House Minority Leader Kevin McCarthy to ensure the rules change could be implemented by unanimous consent or voice vote, without members having to come back to Washington approve it in person.

“I think we’re at a point now we have to talk about how we function in the face of a pandemic,” McGovern said.

Since the pandemic began, House leaders have attempted to conduct business through unanimous consent or voice vote — procedures commonly used to accelerate the passage of uncontroversial legislation. Approving legislation by unanimous consent would allow most members to remain at home, but it is a fragile strategy — any one member can object to the process.

That happened last month when Republican Rep. Thomas Massie of Kentucky demanded a recorded vote on the historic $2.2 trillion coronavirus stimulus legislation, forcing more than 216 members to return to Washington during the public health crisis simply to deny his effort and approve the measure by voice vote.

Massie has said in recent days that he would take the same course again if congressional leaders attempt to pass the next response bill without calling members to the Capitol. He has advocated for a remote voting option that would keep members accountable without having to travel.

“We need to change this so that people don’t have an excuse for not being accountable,” he said of remote voting on Fox Business last week.

“It’s clearly the best option available to us with different members operating under stay at home orders and different members having various medical conditions and restrictions to consider,” said Raskin in an interview. “It will allow the legislative business of Congress to go forward, while taking into account the extraordinary nature of this pandemic and public health crisis.”

Pelosi has faced growing calls from lawmakers about allowing the chamber to vote remotely, amid fears from members that they could be exposed to the disease by traveling back to Washington. She has consistently pointed to the review being conducted by McGovern before deciding which direction to go.

Pelosi said during a press conference earlier Thursday that McGovern will be presenting a “status report” on voting options during a House Democratic caucus call.

“Whether it’s by proxy voting or remote voting or whatever it is, when we are ready, we will do it,” she said.

“We don’t know how long this pandemic will threaten public health, or how long state stay at home orders will last,” McGovern wrote in his statement. “We all know, though, that Congress needs to be working, whether in person, remotely, or both. We should not wait for this pandemic to end to make changes to the rules that help us to do our jobs in such an unprecedented time.”