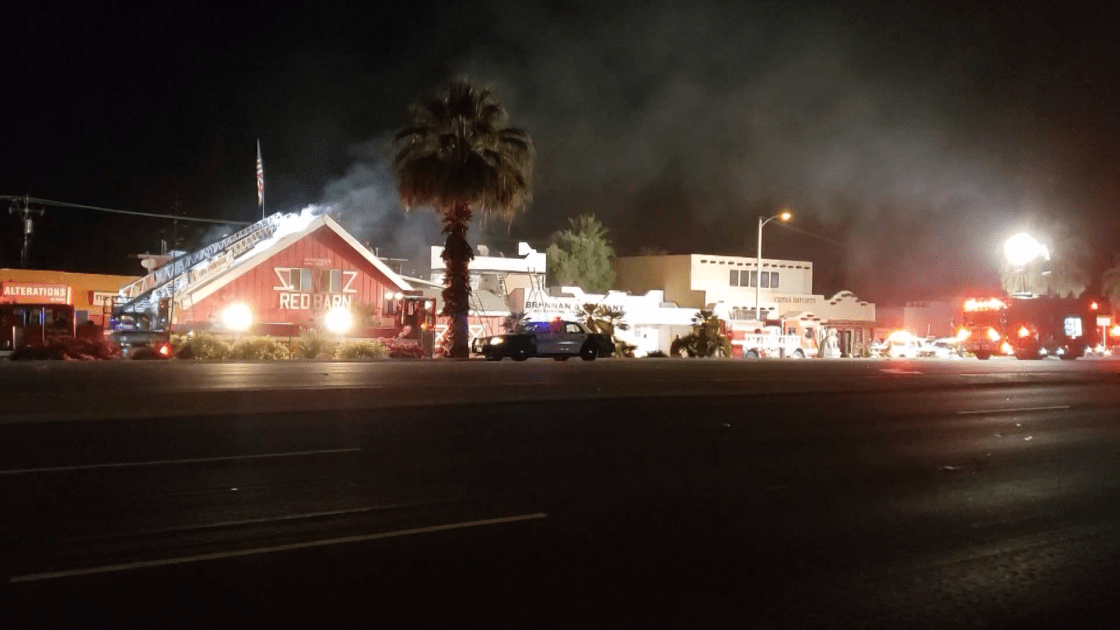 PALM DESERT (CNS) – A bar in Palm Desert, whose owner in recent weeks took to the bar’s roof to broadcast controversial political messages such as “Save jobs! Hang a politician” in frustration with the state’s coronavirus response, caught fire Tuesday, but no injuries were reported.

Firefighters needed more than an hour to extinguish the blaze burning at Red Barn at 73289 Highway 111, which was reported at about 3:40 a.m., according to the Riverside County Fire Department.

Heavy smoke was coming from the front of the building when the first crews arrived on scene, the department said.

Firefighters were able to contain the flames and a knockdown was called at about 4:45 a.m. Photos from the scene show the roof and a portion of the front of the building were damaged.

The fire followed an afternoon of protest several blocks away on Monday stemming from last week’s in-custody death of George Floyd in Minneapolis, although the cause of the fire remains under investigation.

Red Barn owner John Labrano came under fire last month for attempting to reopen his bar despite the stay-at-home order in place due to the coronavirus. He then took to the bar’s roof, broadcasting controversial slogans seemingly in frustration including “Suck my governor, we r essential” and “Make Palm Desert great again.” Despite backlash on social media over the vulgarity of some of the messages, the city announced no laws had been broken.

“We are looking for a few bands to play Saturday between 11am to 2am for a grand re-opening. Taking back Life, Liberty and Freedom Party,” Labrano wrote on Facebook on May 14.

Labrano briefly opened his doors on May 16, but media reports indicated no alcohol was served.