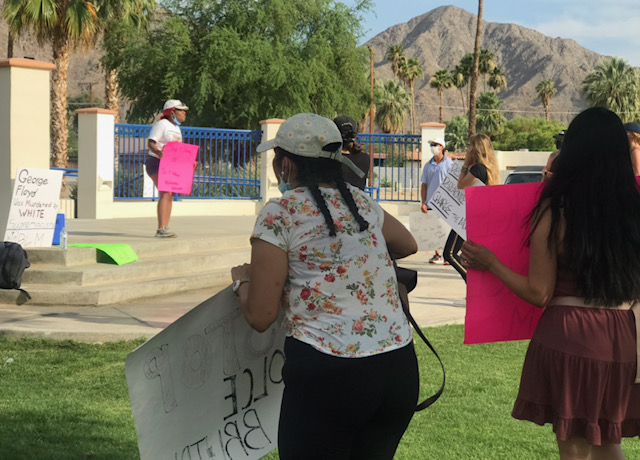 Nicole Smith, better known as Nina is just 21-years-old. When she saw the video of George Floyd she knew she had to do something.

“We need to stand for something or we will die, we will continue to die for nothing,” she says.

She joined in a protest in Los Angeles to call for change, but says when a few protesters got aggressive law enforcement did too. She got hit in the eye with a rubber bullet.

So she created her own movement to spread her message.

“We can use peace to bring everyone together … stop the stereotyping bring peace, bring unity and bring justice to the nation,” she says.

Nina’s message resonated with dozens who showed up in La Quinta to support her message and create change.

“It just really amazed me to see that many people join with me in unity,” says Nina.

It also caught the attention of local law enforcement a lieutenant with the Riverside County Sheriff’s Department called her to praise her efforts.

“It made me feel amazing,” she says.

She says they also offered  support for their next rally in Rancho Mirage, “And they will stand with us in unity to show that we can bring peace and we can do it together.”

Nina names her cause “Stand 4 Something or Die 4 Nothing”.

She’s proof that one person can make a difference.

“I am one person and I will change the community,” she says with a big smile.