Therapy Dog Mauled to Death; Other Dog Back in Owners Possession 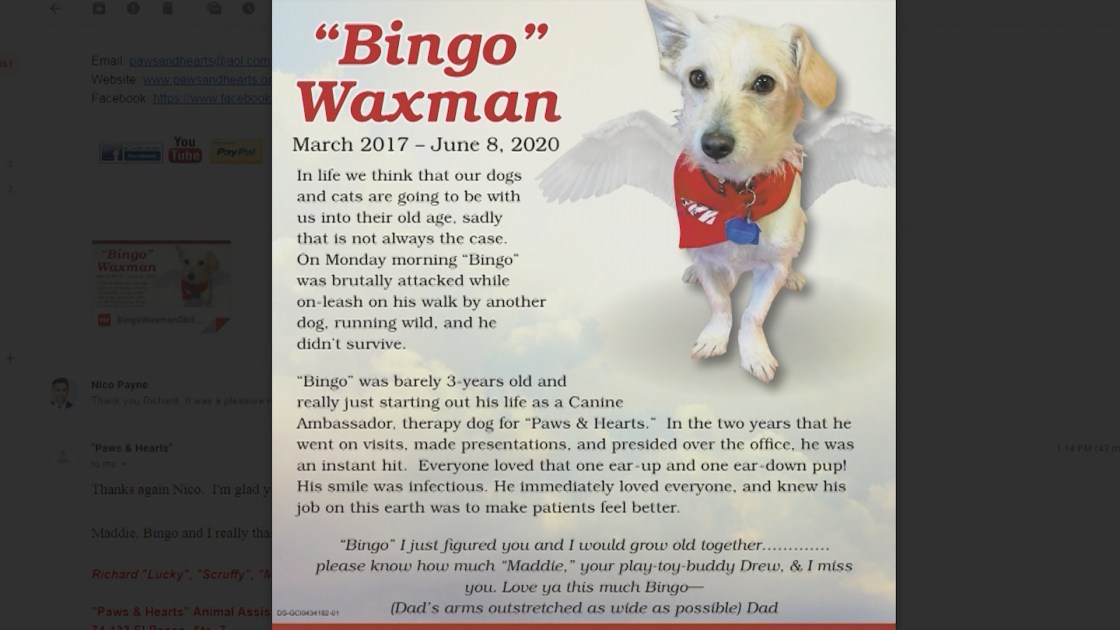 Local dog lover, Richard Waxman who is known for his animal therapy services is looking for justice for his dog Bingo. Bingo was attacked and killed by another dog who is now back in his owner’s possession.

NBC Palm Spring spoke to Waxman who now fears for the safety of kids and other animals.

Bingo was a therapy dog and twice a week he and his sister Maddie would visit patients at a local cancer center to cheer people up. On Monday, June 8th, Bingo was attacked and killed by another dog.

“Right about where we are standing this huge German Shepherd, something rather came bolting across the street, knocked me over and had bingo in his mouth like that,” said Richard Waxman, Founder of Paws & Hearts, Animal Assisted Therapy.

Waxman says he did his best to get his dog to safety, but it all happened so fast.

“I’ve never heard a dog make such gut-wrenching screams, there was not much left of bingo. I ran home I put him in the car, I called the 24-hour clinic in Indio, we got there in about 20 minutes, by the time I pulled into the driveway bingo was already gone,” explained Waxman.

He tells us the dog belongs to Dr. James Kao, an eye surgeon who lives down the street from Waxman. The management company where they live issued a letter to Dr. Kao stating the dog is not allowed back on the property.

Waxman was told by Rancho Mirage Code Compliance the dog was released back to its owner after proof of up to date vaccines, but he says that is not enough.

“What good are these laws when I was promised the dog would be kept in quarantine for ten days and the dog was released to the actual man who let the dog out, who was not in control of the dog,” added Waxman.

The city of Rancho Mirage issued a statement saying, though the feel horrible for Mr. Waxman’s loss they are unable to take action because of municipal codes.

“Do the right thing and surrender the dog and have it put down. who would want that responsibility of this happening again, and what if it’s a child,” said Waxman.

The German Shepherd involved in the incident with Bingo has been involved in tow bite cases, however only the case with bingo was determined a provoked attack.

Two unprovoked incidences would deem the dog dangerous per the city’s code.