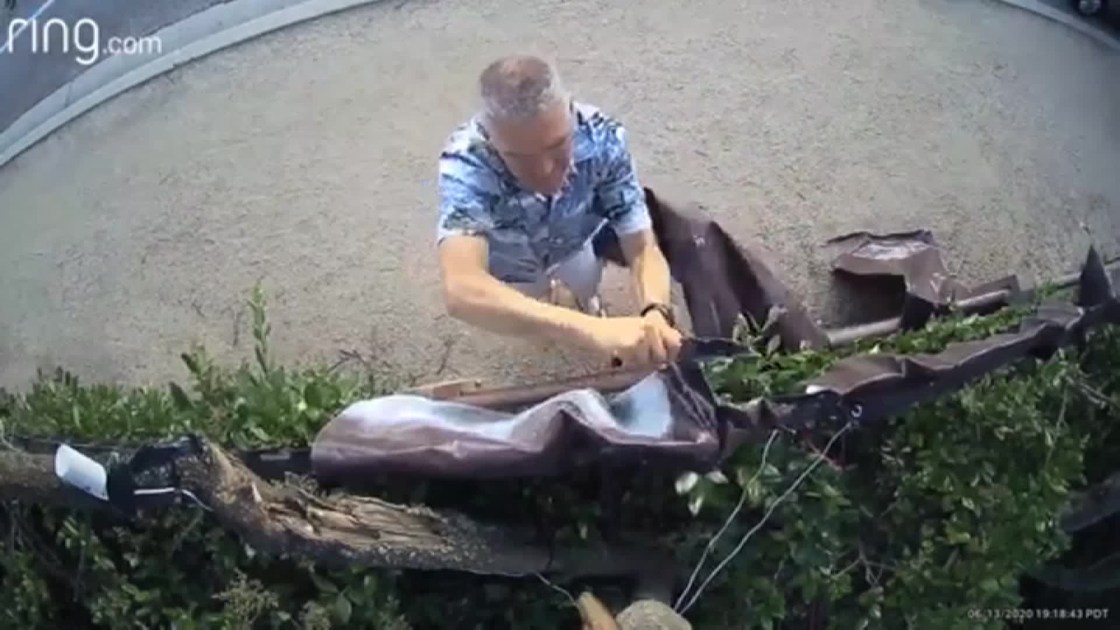 Employees from a Southern California sheriff’s and district attorney’s office were among three people who were arrested after multiple people were caught on a security camera vandalizing a Black Lives Matter sign, authorities said.

The “BLM” sign, which was displayed on a homeowner’s fence in Thousand Oaks, California, was damaged and removed several times, according to the Ventura County Sheriff’s Office.

The owner of the private property installed the surveillance camera near the banner that captured multiple people vandalizing and attempting to remove the sign, which was made out of large white letters spray-painted on brown tarps. He posted the footage on social media.

Detectives from Ventura County Sheriff’s Office allegedly recognized one of the men in the footage damaging the sign as Darrin Stone, a sheriff’s office employee who had been assigned as a service technician at the pre-trial detention facility in Ventura, a non-sworn position.

Stone was captured on the homeowner’s video slashing the sign on June 13 and 19, the sheriff’s office said. Stone was off-duty at the time of both incidents, and received a misdemeanor citation for vandalism and was placed on paid administrative leave. He could not be reached for comment.

“I’m deeply disappointed that one of our employees involved himself in this type of illegal activity, especially when this is an infringement on someone’s First Amendment right to freedom of speech,” said Sheriff Bill Ayub in a statement. “We will not tolerate unlawful or unethical behavior by anyone employed by our agency. We hold our employees to the highest standards, and there will be consequences for this.”

An investigative assistant in the Ventura County District Attorney’s Office was also cited for vandalism allegedly being captured on video vandalizing the sign. The sheriff’s office said on May 31, Craig Anderson cut down the BLM sign, noticed the homeowner’s surveillance camera, and left the scene.

District Attorney Greg Totten said Anderson was cited for misdemeanor vandalism and has resigned from his position in the office.

A third man, Jeffrey Moore, was also arrested for allegedly defacing the sign on June 11. The sheriff’s office said he was identified on the homeowner’s video footage by the company name and phone number that was “prominently displayed on his vehicle.”

Andy Meyers, the homeowner where the sign was erected, said his son, a college student, created it to show support for the Black Lives Matter movement.

“None of us expected it to be vandalized. But to have it defaced by people we’ve always taught him he’s supposed to trust has been a terrible lesson to learn,” Meyers told CNN. “Black Lives Matter. Period. He put up a sign to support a movement. Ironically, their efforts to take it down have only led to more visibility for it.”

Meyers said he and his son decided to install a security camera near the sign after someone attempted to take it down, capturing multiple acts of vandalism.

“We couldn’t believe that someone would actually steal the sign,” he said. “So then we put up the cameras. And to see the hatred — one guy with a knife, one guy practically ripping our fence down, two separate guys with spray paint — it’s sickening.”

And while the situation has left him disheartened, Meyers said he was “far more encouraged by the countless young adults who are becoming activists and agents for positive change, especially my son.”

Despite the damage to the sign, Meyers said he was grateful to the sheriff’s department for being forthcoming with the arrests.

“The sheriff’s office does an amazing job — this is one of the safest communities in the US,” he said. “It’s been so impressive that he stood up, identified one of the vandals as someone in his office, and acted on it immediately. That says so much. I think we all look forward to putting this behind us and moving on to a tomorrow where everyone is treated equally and with the respect that we all deserve.”