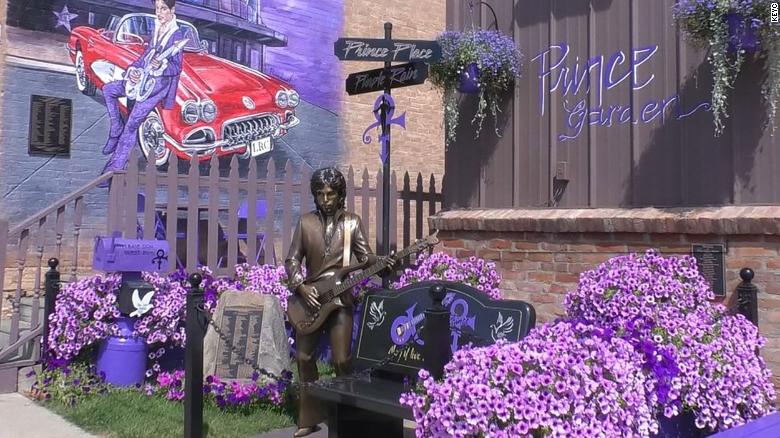 The Minnesota town where one of the most famous scenes from Prince’s movie “Purple Rain” was filmed has unveiled a life-sized bronze statue of The Purple One in a garden filled with purple flowers and other tributes to the artist.

A mural of Prince leaning on a Little Red Corvette looks down on the statue, which was installed on June 28 in Henderson, Minnesota.

Fans of the 1984 film will recognize Henderson from the Lake Minnetonka scene where actress Apollonia Kotero’s character jumped into the frigid water only to learn that it was not Lake Minnetonka.

The spot is on a banks of the Minnesota River, about 45 minutes from Minneapolis and Prince’s Paisley Park Studios.

The statue cost $40,000, with most of the money coming from fans, who gave $100 to have their names included on a bronze donor plaque, according to Joel King of the Prince Legacy Henderson Project.

“It’s kind of giving back to Prince what Prince gave me,” King said.

King says fans have been coming to Henderson for years because of “Purple Rain.” The project started with a granite bench carved with doves and Prince’s famous symbol guitar, and then it added the mural.

There is a guest book in a purple mailbox with the address 1999. King says it’s been signed by more than 4,000 people from all over the world.

He expects the statue to be an even bigger draw.

Tour operator Randy “Capt. Randy” Luedtke was impressed when he came to see the statue.

“It was such a beautiful commemorative opportunity for Prince’s legacy to continue to live on,” he said.

His company has been taking fans to see landmarks from Prince’s rise to fame in Minneapolis for about four years. Luedtke says the company typically does two tours a week, plus smaller VIP tours.

One popular stop is the real Lake Minnetonka, Luedtke said.

“People just want to grab a vial of water, they want to baptize themselves,” he said.

Luedtke hasn’t been able to run tours because of the coronavirus pandemic, but he says he’s adding Henderson to the itinerary once he is back in business.

King says the Prince connection has been great for the community, and local businesses have embraced the garden and the tourists it attracts. They even host a music festival on his birthday called “Prince Fest.”

King feels like it was the perfect time to unveil the statue, since so many controversial monuments are being taken down.

“It’s kind of cool to have the statue now, especially when they’re tearing down all the statues in America, and then to have a Black man on a statue is pretty cool,” he said. “I think it’s kind of the right time, and Prince deserves it.”