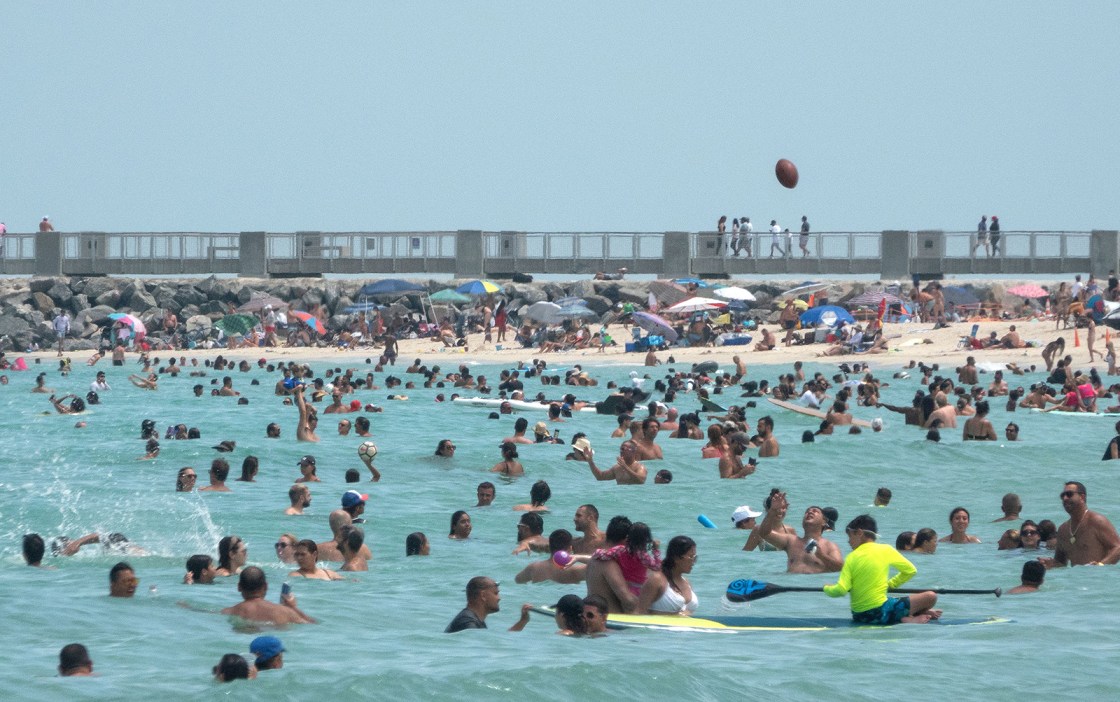 With more than 2,000 patients hospitalized and hundreds in Intensive Care Units, “Miami is now the epicenter of the pandemic,” one infectious disease expert said, comparing the South Florida metropolitan area to the city where the pandemic originated.

“What we were seeing in Wuhan — six months ago, five months ago — now we are there,” Lilian Abbo, with the Jackson Health System said during a news conference hosted Monday by the Miami-Dade County mayor.

The Chinese city of Wuhan, the original epicenter of the coronavirus crisis, went into a 76-day lockdown in late January after a deadly outbreak infected and killed thousands.

The first known cases of the virus were detected in the city in December and by mid-April officials reported more than 50,000 infections. Miami-Dade County has recorded more than 64,000 infections so far, according to state data.

Forty-eight Florida hospitals, including eight in Miami-Dade, have reached their ICU capacity, according to the Agency for Health Care Administration.

On Tuesday, Florida health officials reported 132 Covid-19 related deaths from Monday, breaking the record for most deaths in a single day due to coronavirus. The previous record was 120 deaths reported July 9.

“We need your help as media communicators to help the community understand that we’re just not repeating the same thing over and over just to give you trouble, we really need your help,” Abbo said, directing those comments to reporters.

The plea echos the requests from other leaders in the state and across the country who have seen new cases spike as people flocked back outside following weeks of lockdowns.

More than 3.3 million people have now tested positive nationwide — but the true number of infections could be much higher, experts have said, as at least 40% of those who contract the virus show no symptoms, according to a new estimate by the US Centers for Disease Control and Prevention.

With no way to control the rapid spread of the virus and with thousands possibly infecting others unknowingly, state and local officials have been forced to rethink more restrictions and in some cases, possibly a second round of lockdowns.

In Houston, where hospitals are already overwhelmed with patients and hitting ICU capacity, Mayor Sylvester Turner said Monday he proposed a two-week shutdown to the governor following a surge of cases.

“I do think we are going to need to shut down for a period of time. I am proposing two weeks, or at the very minimum, to return to phase one,” Turner said.

In Atlanta, the mayor also tried to revert the city to the first phase of reopening — where residents are ordered to stay at home except for essential trips. That decision was slammed by Georgia Gov. Brian Kemp, who said it was “legally unenforceable.”

More than half of US states have now halted or rolled back their reopening plans in hopes of preventing further spread. The end of the pandemic is nowhere near in sight, the country’s leading infectious disease expert said Monday, but that doesn’t have to mean a new wave of shutdowns — as long as communities follow the rules.

“You don’t necessarily need to shut down again, but pull back a bit,” Dr. Anthony Fauci said during a webinar with the Stanford School of Medicine.

After an uptick in cases, at least three states announced restrictions Monday, including California, New Mexico and Oregon.

The 30 counties that are on the state’s watch list will need to close indoor operations for fitness centers, places of worship, offices for non-critical sectors, personal care services, hair salons and barbershops and malls, the governor said.

In New Mexico, which has recorded at least 20% of its total infections in the past two weeks, an order from the governor puts in place restrictions on indoor seating at restaurants and breweries once again.

Restaurants and breweries can seat people outside at 50% capacity and may continue to operate takeout and delivery services. The new orders also tighten restrictions on gyms and other businesses including tattoo parlors and salons.

“Unfortunately, our state’s dramatically rising case numbers reflect that those behavior modifications and precautions have either not been taken seriously or taken up by enough people,” Gov. Michelle Lujan Grisham said in a statement.

Cities are also becoming stricter. Philadelphia has canceled parades, festivals and other large events on public property through February 28, the mayor’s office said Tuesday. The order doesn’t apply to events on private property, including sports stadiums and concert venues.

As cases climb, experts are also dialing up their calls for Americans to take precautions — and wear face masks. But more than two dozen states don’t have a statewide mask mandate.

“You have a choice,” Dr. George Rutherford, a professor at the University of California, San Francisco, said. “You can be locked down as the economy goes to hell, or you can wear a mask.”

In Texas, which pushed for one of the most aggressive reopenings, Gov. Greg Abbott warned residents “the worst is yet to come.” Abbott has issued an executive order requiring residents in counties with 20 or more active coronavirus cases to wear face coverings in public.

President Donald Trump also made his first appearance in front of the press with a face mask on over the weekend, after refusing to wear one in public for months.

First Lady Melania Trump tweeted an image of herself from early April wearing a face mask, along with a reminder for people to continue to wear them and adhere to social distancing guidelines.

“Even in the summer months, please remember to wear face coverings & practice social distancing,” she wrote. “The more precaution we take now can mean a healthier & safer country in the Fall.”

Fauci, director of the National Institute of Allergy and Infectious Diseases, said Tuesday that a “misstep” in communicating to the public the benefits of wearing a mask early in the Covid-19 pandemic hurt its “credibility” as public health tool.

In an interview with CNN contributor Dr. Abdul El-Sayed, host of the Crooked Media podcast “America Dissected,” Fauci said that in the beginning of the pandemic, health officials were trying to make sure health care workers had enough personal protective equipment, including masks, as hospitals filled with Covid-19 patients.

“What got, I think, a little bit misrepresented in that message was not that it was just we wanted to preserve them, but they don’t really work that well anyway,” Fauci said. “That was the mistake, because in fact there’s no doubt that wearing a mask is better than not having a mask for the general public.”

These are the states with mask mandates

As more states announce restrictions, education leaders have now also been forced to reconsider what the upcoming school semester will look like for students.

Florida’s department of education said earlier this month it was requiring schools to reopen in August despite its surge of cases. On Monday, Gov. Ron DeSantis said he thinks parents “should have the option” of whether or not to send their children back to school.

But as more teachers and administrators voice opposition to returning –– worried both about their own and students’ safety — districts across the country are announcing they’ll go virtual, or at least give parents more options.

In New York City, Mayor Bill de Blasio offered options for partial in-person instruction in the fall. But the state’s governor said Monday in order for in-person class to be allowed, a region must be in Phase 4 of reopening, which New York City is not.

Most US parents say it would be risky to send their children back to school in the fall, according to this week’s installment of the Axios-Ipsos Coronavirus Index.