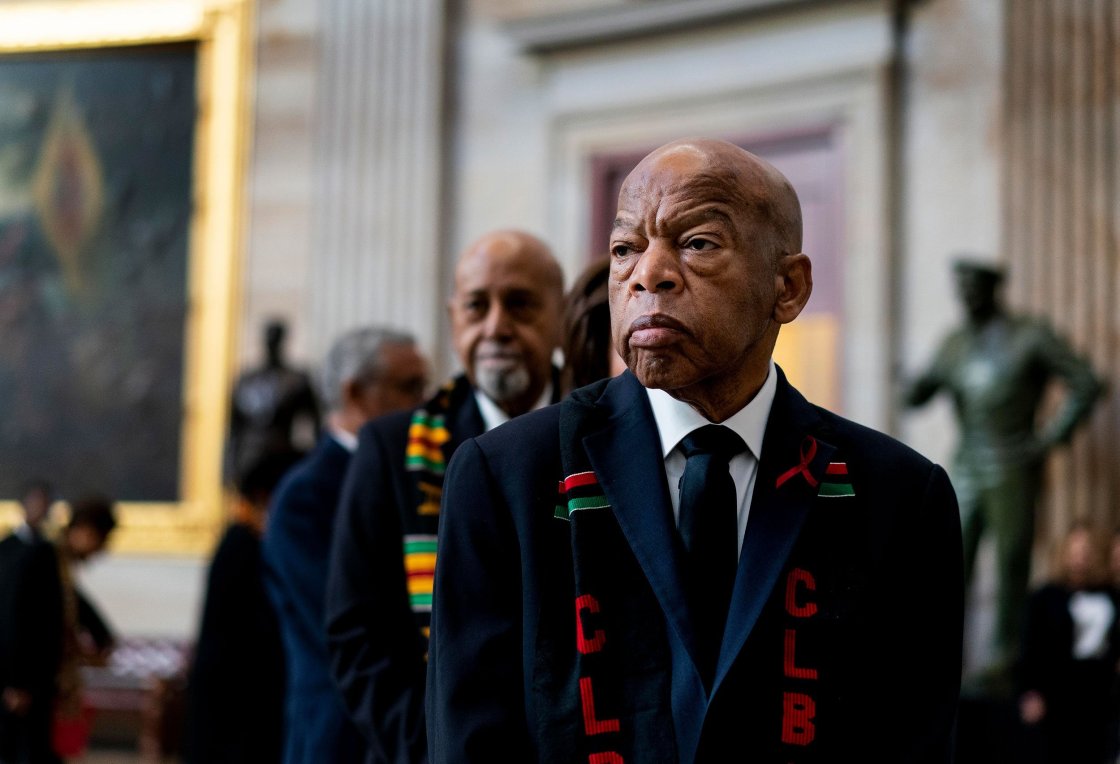 John Robert Lewis, the son of sharecroppers who survived a brutal beating by police during a landmark 1965 march in Selma, Alabama, to become a towering figure of the civil rights movement and a longtime US congressman, has died after a six-month battle with cancer. He was 80.

“It is with inconsolable grief and enduring sadness that we announce the passing of U.S. Rep. John Lewis,” his family said in a statement. “He was honored and respected as the conscience of the US Congress and an icon of American history, but we knew him as a loving father and brother. He was a stalwart champion in the on-going struggle to demand respect for the dignity and worth of every human being. He dedicated his entire life to non-violent activism and was an outspoken advocate in the struggle for equal justice in America. He will be deeply missed.”

Lewis died on the same day as civil rights leader the Rev. Cordy Tindell “C.T.” Vivian, who was 95. The dual deaths of the civil rights icons come as the nation is still grappling with racial upheaval in the wake of the death of George Floyd and the subsequent Black Lives Matter protests that have swept the nation.

It’s another heartbreak in a year filled with them, as America mourns the deaths of nearly 140,000 Americans from Covid-19 and struggles to bring the virus under control.

House Speaker Nancy Pelosi announced his death in a statement.

“Today, America mourns the loss of one of the greatest heroes of American history: Congressman John Lewis, the Conscience of the Congress,” the California Democrat said.

Lewis had vowed to fight the disease after announcing in late December 2019 that he had been diagnosed with stage 4 pancreatic cancer, which was discovered as a result of a routine medical visit and subsequent testing.

“I have been in some kind of fight — for freedom, equality, basic human rights — for nearly my entire life. I have never faced a fight quite like the one I have now,” he said in a statement at the time.

Lewis, a Democrat who served as the US representative for Georgia’s 5th Congressional District for more than three decades, was widely seen as a moral conscience of Congress because of his decades-long embodiment of nonviolent fight for civil rights. His passionate oratory was backed by a long record of action that included, by his count, more than 40 arrests while demonstrating against racial and social injustice.

A follower and colleague of Martin Luther King Jr., he participated in lunch counter sit-ins, joined the Freedom Riders in challenging segregated buses and — at the age of 23 — was a keynote speaker at the historic 1963 March on Washington.

“But I felt when we were sitting in at those lunch counter stools, or going on the Freedom Ride, or marching from Selma to Montgomery, there was a power and a force. God Almighty was there with us.”

Lewis has said King inspired his activism. Angered by the unfairness of the Jim Crow South, he launched what he called “good trouble” with organized protests and sit-ins. In the early 1960s, he was a Freedom Rider, challenging segregation at interstate bus terminals across the South and in the nation’s capital.

“We do not want our freedom gradual; we want to be free now,” he said at the time.

At age 25, Lewis helped lead a march for voting rights on the Edmund Pettus Bridge in Selma, where he and other marchers were met by heavily armed state and local police who attacked them with clubs, fracturing Lewis’ skull. Images from that “Bloody Sunday” shocked the nation and galvanized support for the Voting Rights Act of 1965, signed into law by President Lyndon B. Johnson.

“I gave a little blood on that bridge,” he said years later. “I thought I was going to die. I thought I saw death.”

Despite the attack and other beatings, Lewis never lost his activist spirit, taking it from protests to politics. He was elected to the Atlanta city council in 1981, then to Congress six years later.

Once in Washington, he focused on fighting against poverty and helping younger generations by improving education and health care. He also co-wrote a series of graphic novels about the civil rights movement, which won him a National Book Award.

Born on a Troy, Alabama, cotton farm into a segregated America on February 21, 1940, Lewis lived to see an African American elected president, a moment he said he never thought would come despite his decades long fight for equality.

“When we were organizing voter-registration drives, going on the Freedom Rides, sitting in, coming here to Washington for the first time, getting arrested, going to jail, being beaten, I never thought — I never dreamed — of the possibility that an African American would one day be elected president of the United States,” he said at the time.

In 2011, after more than 50 years on the front lines of the civil rights movement, Lewis received the nation’s highest civilian honor, the Presidential Medal of Freedom, placed round his neck by America’s first Black president.

Obama said in a statement following Lewis’ death that the civil rights icon will “continue, even in his passing, to serve as a beacon” in America’s journey towards a more perfect union.

“He loved this country so much that he risked his life and his blood so that it might live up to its promise. And through the decades, he not only gave all of himself to the cause of freedom and justice, but inspired generations that followed to try to live up to his example,” Obama said.

Ahead of the inauguration of Donald Trump in 2017, Lewis said he did not consider him to be a “legitimate” president, an astonishing rebuke by a sitting member of Congress toward an incoming president.

“I think the Russians participated in helping this man get elected. And they helped destroy the candidacy of Hillary Clinton,” Lewis said.

Trump fired back, calling Lewis “all talk” and “no action” and saying he should focus more on “fixing and helping” his district rather than “complaining” about Russia.

“I’ve said to students, ‘When you see something that is not right, not fair, not just, you have a moral obligation to do something, to say something,'” Lewis said in spring 2018. “And Dr. King inspired us to do just that.”

Trump reacted to Lewis’ death Saturday afternoon, saying in a tweet, “Saddened to hear the news of civil rights hero John Lewis passing. Melania and I send our prayers to he and his family.” Earlier Saturday, Trump ordered that flags at the White House and on federal buildings be lowered to half-staff throughout Saturday to honor Lewis.

He once described an incident when, as a young man, he was beaten bloody by members of the Ku Klux Klan after attempting to enter a “white waiting room.”

“Many years later, in February of ’09, one of the men that had beaten us came to my Capitol Hill office — he was in his 70’s, with his son in his 40’s — and he said, ‘Mr. Lewis, I am one of the people who beat you and your seat mate'” on a bus, Lewis said, adding the man said he had been in the KKK. “He said, ‘I want to apologize. Will you accept my apology?'”

After accepting his apology and hugging the father and son, the three cried together, Lewis remembered.