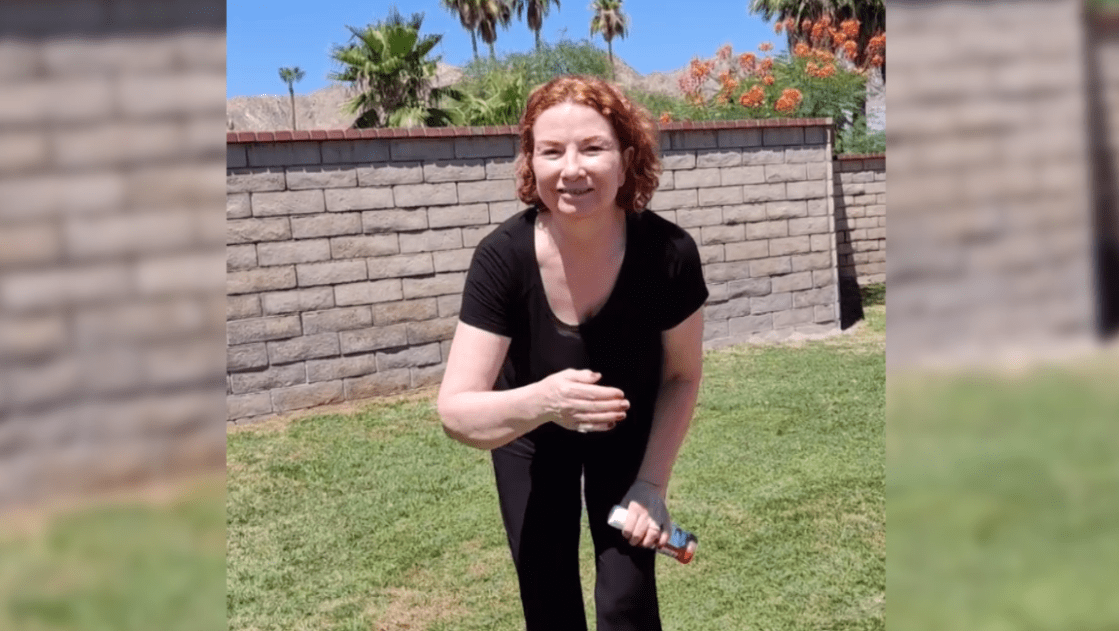 A community in Rancho Mirage came together Monday night to show their support for local landscaper, Juan Andrade, after a video went viral of a woman trying to demand immigration papers from him while mowing the lawn at the apartment complex she lived at. 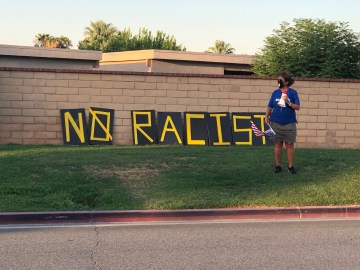 “For her to do this to our valley and think that she was above and privileged in her thinking, no it hurt a lot of us,” said rally organizer, Yasmin Espinoza.

A city investigation determined the incident was an isolated event, but management of the house complex is conducting their own review which could result in the eviction of the woman.

Andrade was at the gathering and expressed his gratitude to everyone who has been supporting him.

“I want to thank everyone for the supprort,” said Andrade.

He say’s he hopes his story can be the catalyst for change.

After the video of Juan Andrade where it shows a racist incident between him and a woman from Rancho Mirage at the Parkview Villas circulated,the city has taken action on the disturbing incident.

The City Attorney Steve Quintanilla along with the Housing Authority’s Manager Marcus Aleman say they will initiate an investigation process. They said “The Rancho Mirage HOusing Authority has a zero-tolerance policy for this type of behavior and the harassment of any one, including other tenants, visitors, guests and contracted vendors conducting work at its affordable senior housing properties.”

Several Neighbors from the community have also reacted to the video that is now circulating on social media.

“We don’t need people like that living here,” said Evelyn DeMaria, who lives near the Parkview Villas. And Luis Medina who does live in the villas said “We live around the neighborhood and we are supposed to be more together and more friendly.”

As of now, there is no confirmation on the name of this woman, but residents have seen the video and say she had no right to ask the worker for his legal status.

“Even when you are working, you have certain rights and the lack of respect to our community is immense,” said Amalia Aztlan, who is a resident from the valley and is president for Democratic Women of the Coachella Valley.

Juan Andrade has worked for a landscaping company for 10-years in the city of Rancho Mirage.

“It’s usually been about the work, but never to instigate or harass me,” said Andrade

While on the job, Andrade was mowing the lawn at an apartment complex, when a woman approached him and began harassing him by making racist comments.

“Like any other complex I was just doing the work for all of them, mowing the lawn. I passed by her apartment and when I turned around to do the second round that’s when I saw her standing,” said Andrade.

He says this isn’t the first time this woman has done this. Three months ago, this same woman approached him and told him to “Go back to his country.”

This time he recorded it to show that the valley isn’t exempt from the racist divide, which he says has started during this administration.

In the video you can see the woman with no mask and no respect for social distancing as she stands in front of him and his equipment, demanding to see his citizenship status.

“When she was harassing me, I started to feel mad because I was just doing my work,” said Andrade.

“Unless you are law enforcement, but aside from that, they are using that conversation as just another way to intimidate and create objects out of human beings who appear to be different from them,” said Megan Beaman Jacinto, who is an immigration lawyer in the Coachella Valley.

Andrade has reported the incident to his employer and plans to avoid the area.

“Based on what i have seen from her, i think she thinks she didn’t do anything wrong. She believes she’s in the right, so I don’t think she’ll ever apologize,” said Andrade.