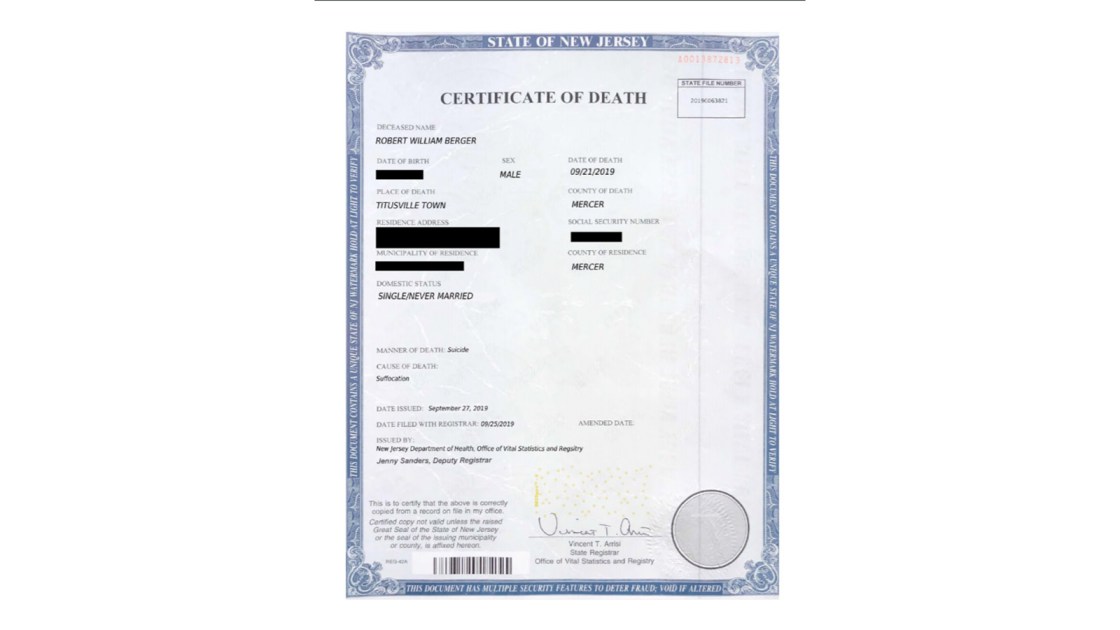 A Long Island man allegedly created a fake death certificate to avoid being sentenced for unrelated charges, but a typo on the certificate gave him away, prosecutors said.

Robert Berger, 25, was charged Tuesday with offering a false instrument for filing, according to Nassau County District Attorney Madeline Singas.

Berger was previously charged with fourth-degree possession of stolen property in December 2018 and third-degree attempted grand larceny in June 2019, and pleaded guilty to both charges, according to a press release from the New York prosecutor’s office.

He was due to be sentenced on October 22, 2019. But at the sentencing hearing, Berger’s former attorney, Meir Moza, said Berger had died, according to the district attorney’s office.

Moza gave the court a copy of Berger’s alleged New Jersey death certificate on October 28, the office said, which Berger’s fiancé provided. The certificate said Berger had died by suicide and listed the cause of death as suffocation.

Upon further investigation, prosecutors noticed the word “registry” was misspelled and there were inconsistencies with font type and size. The New Jersey Department of Health confirmed to prosecutors that the certificate was fraudulent, the press release said.

“Submitting fake documents to prosecutors is always a bad idea, and while he’d have been caught regardless, failure to use spell check made this alleged fraud especially glaring,” Singas said in a statement.

After the discovery was made, Moza informed the judge that Berger “engaged in a conspiracy and used him to attempt to perpetrate a fraud” against his office and prosecutors, and that he was ending his representation of Berger, the release said. Prosecutors do not believe that Moza was part of the conspiracy, said Miriam Sholder, deputy communications director of the Nassau County District Attorney’s office.

The Legal Aid Society of Nassau County, which currently represents Berger, declined to comment on the case.

Investigators determined that Berger had left the state and was jailed in Delaware County, Pennsylvania, after being arrested in November 2019 on unrelated charges, according to the press release. He was extradited to Nassau County in January, according to prosecutors.

Bail was set at $1 for Berger but he remains jailed on the two previous charges, the district attorney’s office said. He could face up to four years if convicted of the new charge.

Moza told CNN that he had been negotiating a plea deal for several months when he was notified by Berger’s fiancée that he had died. He had no idea that the certificate was false until the prosecutors informed him, and had not seen anything like this in his 25 years as an attorney, he said.

“He took a good situation with his own hands and threw it away,” Moza said. “I think he needs help and I hope he will get the help he needs now.”