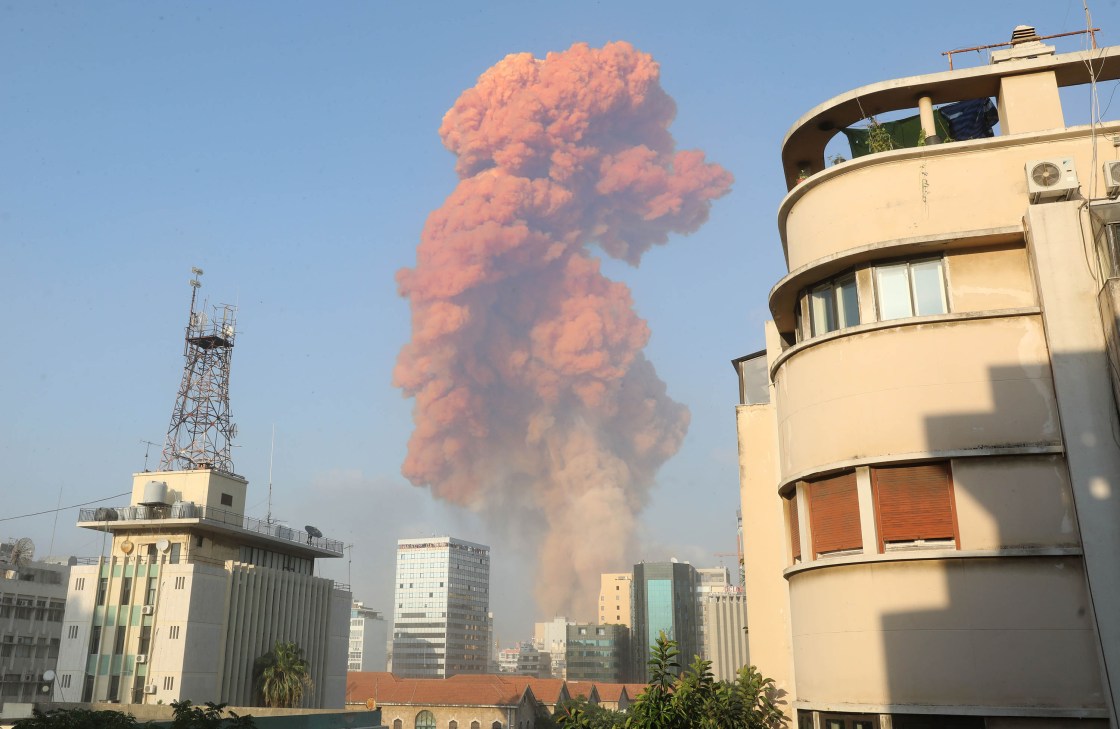 A massive explosion ripped through central Beirut on Tuesday, killing dozens of people, injuring thousands and blowing out windows in buildings across the city.

The blast near Beirut’s port sent up a huge mushroom cloud-shaped shockwave, flipping cars and damaging distant buildings. It was felt as far as Cyprus, hundreds of miles away, and registered as a 3.3 magnitude earthquake in the Lebanese capital.

At least 78 people were killed in the blast, Health Minister Hamad Hasan said, according to Reuters. He said at least 4,000 people have been wounded.

“There are many people missing until now,” Hasan said, according to Reuters. “People are asking the emergency department about their loved ones and it is difficult to search at night because there is no electricity. We are facing a real catastrophe and need time to assess the extent of damages.”

There were conflicting reports on what caused the explosion, which was initially blamed on a major fire at a warehouse for firecrackers near the port, according to Lebanese state news agency NNA.

The director of the general security directorate later said the blast was caused by “high explosive materials confiscated years ago,” but did not provide further details.

An investigation into the explosion was announced by Lebanese Prime Minister Hassan Diab. The probe will include “revelations that will be announced about this dangerous warehouse which has been present since 2014,” he said, without providing any additional details.

CNN’s Ben Wedeman reported that authorities think a large amount of ammonium nitrate seized from a ship in 2013 or 2014 may have caused the blast.

The lethal blast “will not pass without accountability,” the Prime Minister said in a televised statement, adding that “those responsible will pay for what happened.”

A red cloud hung over the city in the wake of the explosion, which took place just after 6 p.m. local time (11 a.m. ET), as firefighting teams rushed to the scene to try to put out the initial fire. Footage from the scene captured the injured staggering through streets in the capital; and ambulances, cars and military vehicles packed with the wounded. One eyewitness said the scenes looked “like an apocalypse.”

At least 10 firefighters are missing, according to the city’s governor Marwan Abboud, who said the scene reminded him of “Hiroshima and Nagasaki.” “In my life I haven’t seen destruction on this scale,” Abboud said. “This is a national catastrophe.”

Australian Prime Minister Scott Morrison said at least one Australian was killed in the blast and the Australian Embassy building has been “significantly compromised.”

The blast comes at a tense time in Lebanon. On Friday, a UN-backed panel is expected to issue a verdict on the 2005 assassination of former prime minister Rafik Hariri, a move many fear will stoke sectarian tensions. The country is also in the midst of an economic meltdown, with ballooning unemployment, a tanking currency and poverty rates soaring above 50%.

Beirut’s hospitals Tuesday reflected the chaos in the city as doctors conducted triage on dozens of wounded people. Some had broken limbs, others had been showered with shards of glass. Some patients were unconscious.

Emergency wards are inundated with the injured, while the Lebanese Red Cross implored the public on Twitter for blood donations to help the wounded. One of Beirut’s major hospitals, Hotel Dieu, received around 400 injured patients, an employee told CNN.

The Secretary-General of the Kataeb political Party, Nazar Najarian, died after being injured in the explosion, NNA reported. He was in his office when the explosion happened.

The US Embassy in Beirut urged those in the area of the explosion to “stay indoors and wear masks if available” due to reports of toxic gases released from the blast.

The explosion damaged buildings across the city, including the official residence of Lebanon’s president, the headquarters of former Prime Minister Saad Hariri, and CNN’s bureau in downtown Beirut. Homes as far as 10 kilometers away were damaged, according to witnesses, and even people on the distant island of Cyprus felt the blast, according to the European-Mediterranean Seismological Centre (EMSC).

One Beirut resident who was several kilometers away from the site of the blast said her windows had been shattered by the explosion. “What I felt was that it was an earthquake,” Rania Masri told CNN.

“The apartment shook horizontally and all of a sudden it felt like an explosion and the windows and doors burst open. The glass just broke. So many homes were damaged or destroyed.”

“You can see injured people all over the streets in Beirut, glass all over the place, cars are damaged, it is like an apocalypse,” said Bachar Ghattas, another resident.

“It is very, very frightening what is happening right now, and people are freaking out. The emergency services are overwhelmed,” Ghattas told CNN. “Beirut port is totally destroyed.”

The port is the primary entry point for most of Lebanon’s imports, CNN’s Wedeman said.

US President Donald Trump offered sympathy and assistance to the people of Lebanon, referring to the incident as a “terrible attack.” Lebanese officials have not called the explosion an attack.

Asked if he was confident if the explosion was an attack, the President said it “seems like” it was, based on what US military officials have told him.

“This was a — seems to be according to them, they would know better than I would, but they seem to think it was an attack. It was a bomb of some kind,” he said.

US Secretary of State Mike Pompeo extended condolences and said, “We are closely monitoring and stand ready to assist the people of Lebanon as they recover from this tragedy.”

The United States Ambassador in Lebanon, Dorothy Shea, expressed “heartfelt sympathies” to the victims and their families after “having witnessed the horrific explosions at the Port,” she said in a statement shared on Twitter.

“We mourn each loss from this terrible tragedy alongside the Lebanese people,” the US Ambassador added.

Prime Minister Diab described the explosion as a “catastrophe” in his televised statement. He concluded by making “an emergency call to all those countries who love this country to stand by us and to help us heal our deep wounds.” World leaders have expressed their condolences amid the unfolding tragedy.

Israel offered humanitarian medical assistance to Lebanon — a significant gesture as Lebanon is one of a small number of countries that Israel regards as an enemy state. There have been no diplomatic relations since a ceasefire signed between the two countries in 1949.

A spokesman at the Ziv Medical Center in Safed, Israel, not far from the border with Lebanon, told CNN that they had been contacted by the Israel Defense Forces (IDF) and told to prepare for the possible arrival overnight of UN personnel wounded in the blast.

The UK, Turkey, Qatar and Spain were also among the countries that offered their support to Lebanon.

Jordanian Foreign Minister Ayman Safadi called his Lebanese counterpart Charbel Wahbeh to say that”Jordanians stand in support with Lebanon and its Lebanese brothers and are ready to offer any help they need,” he said in a tweet.

French President Emmanuel Macron said “rescue and aid” were on the way to Lebanon, while expressing solidarity with the “Lebanese people after the explosion that caused so many casualties and so much damage tonight in Beirut.”

Iran’s Foreign Minister Javad Zarif tweeted that his country was ready to help Lebanon “in any way necessary.”

“My thoughts are with the people of #Lebanon and with the families of the victims of the tragic #BeirutBlast,” President of the European Council Charles Michel said in a tweet. “The EU stands ready to provide assistance and support.”

Lebanese militant and political group Hezbollah said the explosion will require the unity of all Lebanese to overcome the catastrophe.

“We are putting all our capabilities in serving our honorable people and dear citizens as needed,” Hezbollah said in a statement.