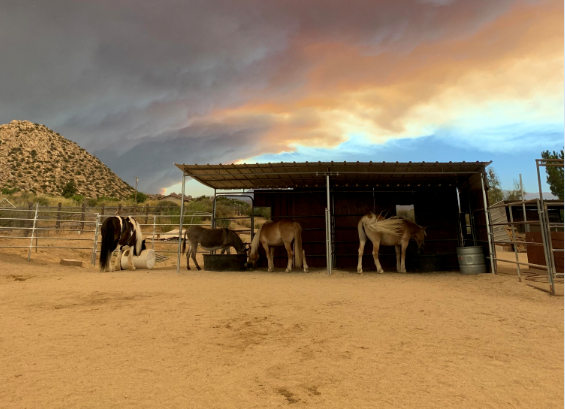 As the Apple Fire heads further northeast, some San Bernardino County communities are preparing for the worst but hoping for the best. On Tuesday, voluntary evacuations were underway in Forest Falls, Rimrock and Pioneertown.

One Pioneertown resident, Christine, said a cloud of smoke loomed over her property across the street from Pappy and Harriets. She snapped several photos on Saturday to capture the ominous moment. 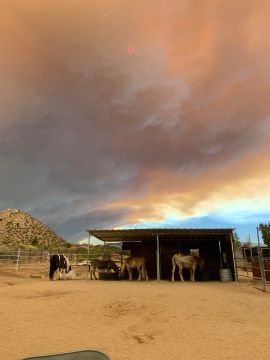 All through the weekend, Christine said she’s been on high alert. She owns 5 horses, one donkey and several dogs and has had to evacuate them in the past.

“This is the third time, this isn’t the first time,” she said. “You kind of have to decide when is the best time to move on.”

Pioneertown was hit hard by the Sawtooth fire in 2006, a fast moving blaze that ripped through the area.

That memory is keeping everyone in town on edge when it comes to the Apple Fire. That’s why 15 engines were sent to Pioneertown on Tuesday to brief residents on the status of the Apple Fire.

“It’s scary,” Reid Olson, another resident, said. “That’s why I stopped here to get some information.”

Battalion Chief Mike McClintok explained the plans in place to Reid, Christine and other residents that walked up.

“We’re trying to work with any of the public to answer any questions and make sure that we have a good contingency plan if the fire does make it here,” McClintok said.

When asked if he thought the fire would eventually reach Pioneertown, McClintok said he was fairly confident the fires in the past would act as a sort of barrier for the town.

“We’re looking to see some pretty favorable weather conditions in the next couple of days and with the Lake and Sawtooth burn scars I’m feeling pretty optimistic,” he said. “If things do ramp up, we’ll get additional resources, air tankers, bulldozers, crews and more engines in here so I think we’re in pretty good hands.”

Christine said, regardless, it’s good to be prepared.

“It’s just a matter of getting the livestock out.”