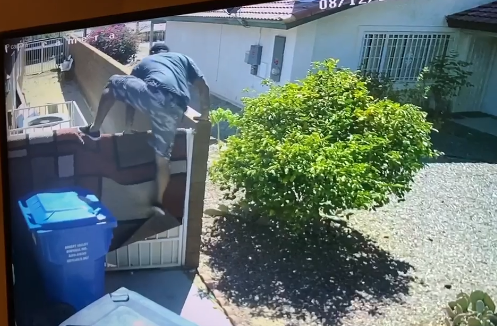 A mother of four in Desert Hot Springs is taking legal action after video captured her landlord hopping the fence and allegedly disconnecting her air conditioning on a day with excessive heat.

“By the grace of God, we caught this video and there he was on the video just hopping over,” Curtresa Washington said about the video she later posted on Facebook in a Desert Hot Springs neighborhood page.

Washington said the man in the video is Chris Dennis, her landlord.

“I have four kids that live in this house, he took the disconnect out of our air conditioning unit so that our air conditioner would stop working,” Washington said in the background of the video on Facebook.

When Curtresa’s house started getting hot, she said she started getting suspicious. Multiple air technicians told her the disconnect was missing which is a part that makes the air conditioner run.

When she looked back at the cameras, she said she was shocked to see her own landlord with what appears to be the disconnect in his hand.

“It’s been a nightmare,” she said.

NBC Palm Springs reached out to the landlord for comment. His wife, Ami, said Chris wasn’t trespassing and that Curtresa knew they were doing repairs and was asking for them.

Ami added that they have had continuous problems with Curtresa. They declined to do a recorded interview for the story.

The day after Curtresa posted the video on her Facebook, she said she received a three-day notice from Chris through email. She also has screenshots of a message from ‘Jimmy’, a property manager, asking for a rent payment.

She said she stopped paying rent when she knew a foreclosure could be coming soon.

“I got this nice little letter from the bank,” Washington said, holding up a letter. “It’s notice of foreclosure sale kind of giving me my tenants rights and how to move forward.”

Washington said that’s when she stopped paying rent. Her last payment was in July. Ami said the foreclosure notice was an “error from the bank”.

Curtesa said she’s always been a good tenant and has only been late on rent two times in her multiple years of living at the property.

After seeing the video, she said she’s taking legal action against Chris and Ami.

“I’m not okay with it, I’ll never be okay with it,” she said. “So with that being said, we are moving forward in the court of law now to pursue justice.”

NBC Palm Springs reached out to Ken Carlson, an attorney with California Tenant Law, to see if Curtresa had a case that could hold up in court.

“Yes, she can sue the landlord for trespass,” Carlson said. “There are only certain grounds under which a landlord can come onto the property under Civil Code 1954.”

“We’ve seen landlords using restraining orders to have a judge evict a tenant without any hearing,” he said. “I think we’ll see other efforts by landlords as the tsunami of evictions hits starting September 2nd.”

Curtresa said she hasn’t heard from Chris since the 3-day notice. Ami and Chris said they will see her in court.