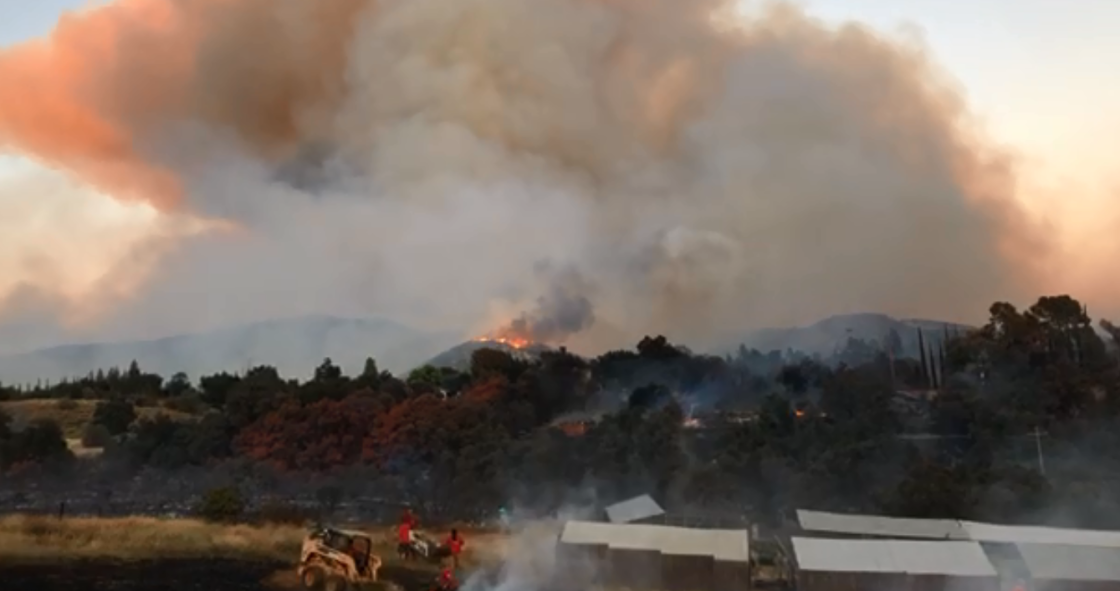 Containment of the fire is at 95%.

Firefighters are working in extreme heat and steep terrain, and an excessive heat warning issued by the National Weather Service is in effect until 10 p.m. Thursday.

High-intensity thunderstorm cells fueled by monsoonal moisture developed over the San Bernardino National Forest early Tuesday afternoon and were tracking to the north, looking as though they would stall over the portion of the burn scar close to Forest Falls in San Bernardino County. However, several hours later, radar returns showed the cells veered sharply to the northwest, with most of the energy shifting away from the fire zone.

Meteorologists had feared flash flooding would occur on the northern tier of the burn scar, eventually impacting the southern half as well, within the San Gorgonio Pass.

The U.S. Forest Service released a burn severity map Tuesday highlighting the corrosive impacts of the nearly three-week Apple Fire, and according to the assessment, 75% of the burn area sustained moderate to severe soil damage.

“The (USFS) team expects erosion and run-off within the Apple Fire area to increase as a result of the fire because 75% of the burned area experienced moderate or high soil burn severity,” agency spokesman Todd Ellsworth said.

He said the greater the burn severity, the higher the likelihood of heavy water and debris flows from slopes, threatening roads and communities below.

The map indicated run-off threats to Cherry Valley, the Morongo Indian Reservation and neighboring locations in both Riverside and San Bernardino counties.

Since sparking July 31 in Cherry Valley due to a diesel vehicle malfunction, the Apple Fire has injured four firefighters and destroyed four homes and eight outbuildings.

An estimated 2,600 residences and 7,800 people were evacuated at the height of the blaze, which has cost $51.8 million to confront.

Roughly 250 fire personnel remain assigned to the blaze, tightening containment lines, aided by five water-dropping helicopters, according to the USFS.

The blaze burned through federal, state and private lands, according to Cathleen Thompson of the U.S. Department of Agriculture, and several governmental agencies will have to conduct their own post-fire assessments, as the Forest Service has already done, she said.

The San Gorgonio Wilderness area — where 7,249 acres have burned — remains closed to the public.

A portion of the Pacific Crest National Scenic Trail is closed to all traffic between the Cottonwood Trailhead, near the community of San Gorgonio, and Forest Road 1N01.

All recreation areas in the Forest Falls area are inaccessible, as well.

Additional information about the closures can be found at http://www.fs.usda.gov/sbnf.