Dozens of homes have been destroyed and thousands of people evacuated overnight as nearly three dozen lightning sparked fires ripped through northern California.

The most serious of the blazes is called the LNU Lightning Complex and has blackened 46,000 acres in Napa, Sonoma, and Solano Counties.  That includes the city of Vacaville where early Wednesday morning thousands of people hurriedly evacuated as the wind whipped flames roared down Mt. Vaca and into the outskirts of town.

Video broadcast by NBC affiliate KCRA-TV in Sacramento showed frantic residents driving through towering flames near Lake Berryessa.  The station also broadcast video of numerous homes on fire as well as a fire storm moving through a communications relay facility at the top of Mt. Vaca used by police and fire agencies as well as Bay Area and Sacramento television stations.

At this point, it is impossible to determine the exact number of homes that have been destroyed as attention now is focused on evacuations and structure protection.

Governor Gavin Newsom declared a statewide emergency because of the severe fire situation which includes major blazes from near the Oregon border all the way to southern California.

While significant fires burn in the Southern California, it is Northern California and in particular the Bay Area which is suffering the biggest impact.  In addition to the massive LNU complex in the North Bay where more than 50 homes have burned and 2000 more are threatened, there are 20 separate fires burning in Santa Clara County.  85,000 acres there have burned and 1400 structures are threatened.

East of Sacramento, in the Sierra Nevada foothills, 4000 people have been forced from their homes in the historic towns of Nevada City and Grass Valley where four homes have been destroyed in the Jones Fire.  11,000 PG&E customers throughout western Nevada County including all of Grass Valley and Nevada City lost electricity shortly after 9:00AM Wednesday. That fire is only 5% contained as of Wednesday morning.

A dense smoke advisory along with and excessive heat warning and red flag warning is in effect throughout much of northern California.  Before and after pictures at Lake Tahoe show visibility has been cut to just a few hundred feet as smoke obliterates the sun and views of the lake. 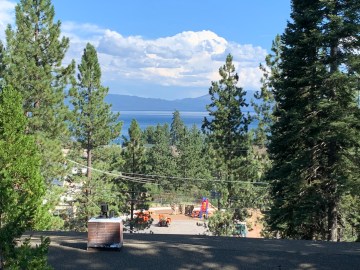 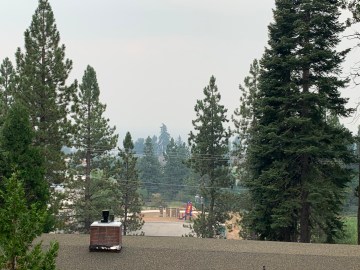