PSPD will seek charges on the 16-year-old for negligent discharge of a firearm, conspiracy and battery.

No further details will be released at this time as detectives continue to search for evidence and additional subjects involved in the shootings and homicides.

Last Wednesday, a 15-year-old boy was found shot to death in the 300 block of Avenida Cerca, and two others were assumed injured, following a nearby shootout. The boy, who was not publicly identified, was gunned down near where several other shootings, and three other homicides, have been reported in recent months.

More than 100 law enforcement officers served search warrants in the Desert Highland Gateway Estates and Santiago Sunrise Village neighborhoods on Aug. 6, the culmination of a nearly yearlong investigation into 24 confirmed shootings in and around those neighborhoods dating to October of last year.

In that time, police say they received another 61 reports of shots fired in those neighborhoods, although evidence of gunfire in those cases was not found.

PSPD is asking the public’s assistance in providing information on any of the incidents to date to call the PSPD Crimes Against Persons Unit at 760-323-8129, or report information anonymously to Crime Stoppers at 760-341-7867. 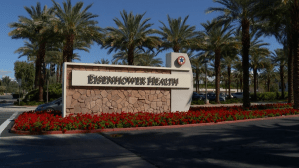