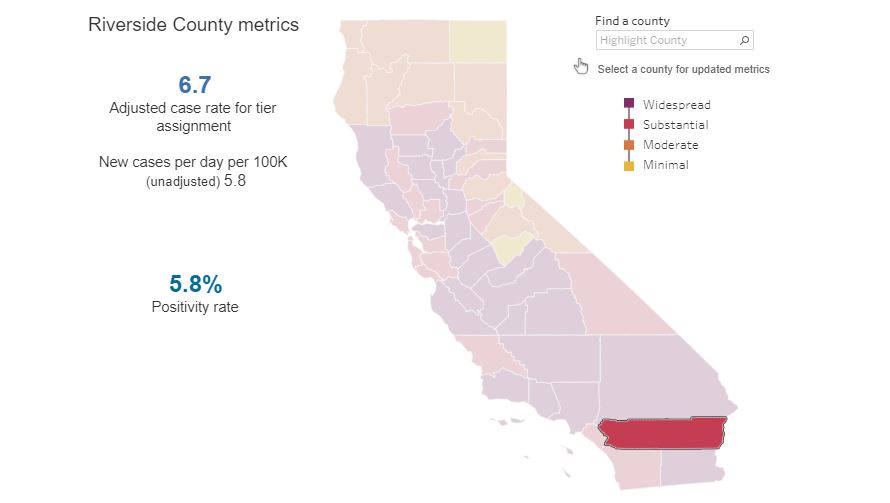 Riverside County moves to red tier in phases of reopening

RIVERSIDE (CNS) – Riverside County Tuesday moved into the next tier under the state’s four-tier de-regulation plan to contain the coronavirus, permitting most businesses and all churches to resume indoor activity with limitations, though the Board of Supervisors’ own pending action could make the change immaterial.

Gov. Gavin Newsom announced the county’s shift to the “red tier” from the most restrictive “purple tier” as part of his Blueprint for a Safer Economy. The county qualified for the move under testing and positivity thresholds established by the governor and California Department of Public Health.

Under the red tier, shopping malls and swap meets can operate at a maximum 50% capacity, while houses of worship are permitted to have indoor attendance of 25% capacity, or up to 100 people, whichever is less.

Bars and “non-essential” offices are still prohibited from opening, under threat of fines from public health authorities.

The board, meantime, was set Tuesday afternoon to debate replacing the state’s tiered system with an accelerated reopening plan that would take effect this week, and by the first week of November, permit all businesses, houses of worship, offices, wineries and other entities countywide to fully open with health safeguards in place.

The aggregate number of COVID-19 infections recorded since the public health documentation period began in early March was 57,419 on Monday, compared to 56,681 at the end of last week. The Riverside University Health System reported Monday that the number of deaths tied to COVID-19 increased to 1,162, compared to 1,153 on Friday.

The number of known active cases countywide was 3,788, or 248 more than Friday. The active count is derived by subtracting deaths and recoveries from the current total — 57,419 — according to the county Executive Office. The number of verified patient recoveries is now up to 52,469.

As of Monday, 131 patients were hospitalized countywide for treatment of the virus, 12 fewer than Friday. That figure includes 47 people in intensive care units — three more than Friday, according to RUHS.

Emergency Management Director Bruce Barton told the Board of Supervisors on Tuesday that the county’s virus-related hospitalizations have plummeted over the last two months, with no concern now over capacity to treat the ill for any malady. He said the Emergency Operations Center in downtown Riverside was “standing down,” with no reason to remain in alert mode.

According to the CDPH, the county has averaged 5.8 cases a day per 100,000 population over the last two weeks, but because COVID-19 testing volumes are below the state median required for a large county, Riverside County has been given an “adjusted rate” of 6.7. That still puts the county below the 7-per-100,000 level needed for tier reassignment.

Additional information about the formula can be found at http://www.covid19.ca.gov/safer-economy.