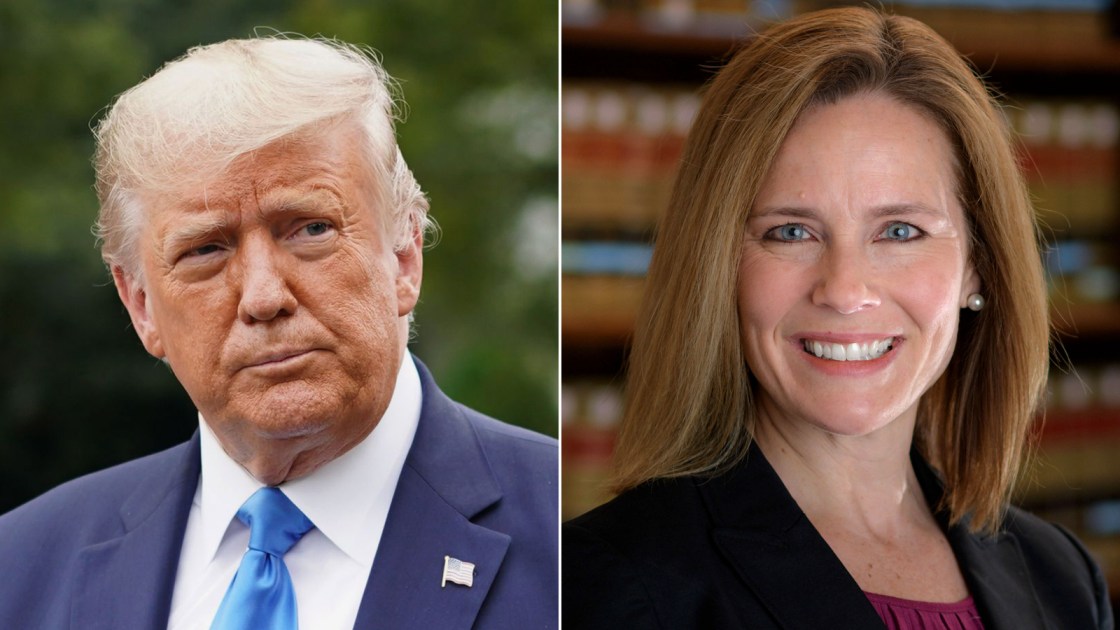 Calling it a “very proud moment indeed,” Trump called Barrett a woman of “towering intellect” and “unyielding loyalty to the Constitution.”

Barrett, Trump said, is “one of our nation’s most brilliant and gifted legal minds.”

The expected nomination comes at a critical time in history, as the President openly questions the integrity of the upcoming election and has not committed to a peaceful transfer of power in the event he loses. He’s repeatedly said that the Supreme Court needed to have all nine seats filled ahead of Election Day, in case the court needed to weigh in on the legality of mail-in ballots being sent to Americans across the country amid the coronavirus pandemic. And several weighty cases loom on the immediate horizon, should she be confirmed as swiftly as Republicans hope, including one that could determine the fate of the Affordable Care Act.

Barrett was appointed by Trump to the US 7th Circuit Court of Appeals in 2017 and advocates on the right have backed her nomination because of her writings on faith and the law. The 7th Circuit is based in Chicago and covers cases from Illinois, Indiana and Wisconsin. If her Senate confirmation is successful before the November election, the appointment would mark Trump’s third US Supreme Court pick in one presidential term, cementing a conservative stronghold in the court for a generation.

Barrett graduated from — and now works part-time as a professor at — Notre Dame Law School. She once worked as a former law clerk to the late right-wing beacon Justice Antonin Scalia. The 48-year-old mother of seven was born in New Orleans, Louisiana, and now lives in South Bend, Indiana, with her husband Jesse M. Barrett.

Following Ginsburg’s death last week, Trump expressed eagerness to appoint her replacement, arguing that he had a constitutional duty to fill her seat and committed to appointing a female nominee. Barrett will be the fifth woman ever appointed to the court and second conservative, if confirmed.

In the week Trump deliberated his latest Supreme Court choice, Barrett, once a finalist for the Supreme Court spot that went to Brett Kavanaugh in 2018, emerged as the favorite among his shortlist, after meeting with the President at the White House, according to sources familiar.

Barrett’s Senate nomination process is set to begin swiftly as conservatives aim to seat her before Election Day.

Two Republican senators have said they do not support voting on the nomination of a Supreme Court justice ahead of the election, but now that Utah Republican Sen. Mitt Romney has signaled that he is on board with moving ahead with a vote, Barrett’s likely to be confirmed barring any potential missteps.

Since joining the appellate bench, Barrett has been a cautious jurist, plainly aware that she remains under a national microscope for any Supreme Court confirmation battle. Still, she has demonstrated her conservative bona fides on Second Amendment gun rights, immigration and abortion — positions Democrats are poised to voice opposition against in upcoming confirmation hearings.

Last year, she dissented alone when a 7th Circuit panel majority rejected a Second Amendment challenge from a man found guilty of felony mail fraud and prohibited from possessing a firearm under federal and Wisconsin law.

In 2018, she joined a dissent with fellow conservatives in an Indiana abortion dispute and referred to a provision that made it unlawful for physicians to perform an abortion because of the race, sex or disability of the fetus was a “eugenics statute.”

More recently in June, she dissented as a 7th Circuit panel left intact a US district court decision temporarily blocking a Trump policy that disadvantaged green card applicants who apply for any public assistance.

And religious conservatives were especially energized by an exchange with Sen. Dianne Feinstein of California, the top Democrat on the Senate Judiciary Committee, during Barrett’s 2017 confirmation hearing for her current judgeship.

In a tense back-and-forth, the Democratic senator sharply questioned whether the judicial nominee could separate her Catholic views from her legal opinions.

“The conclusion one draws is that the dogma lives loudly within you,” Feinstein pointedly said. “And that’s of concern when you come to big issues that large numbers of people have fought for years in this country.”

Barrett supporters believed the nominee was being disparaged for her Catholicism. But Democrats said the exchange was in reference to Barrett’s own writings on the topic that had prompted questions from both parties — and concerns from progressives that she would chip away at abortion rights.

At the hearing, Barrett testified that her religious beliefs would not interfere with her rulings as a federal judge. But Democrats, including Feinstein, were not convinced, worried that Barrett’s views meant that she would strike against abortion rights as a federal judge.

Should Barrett be confirmed before Election Day or shortly thereafter, one of her earliest cases would be on the latest Obamacare challenge. The court is scheduled to hear that case on November 10.