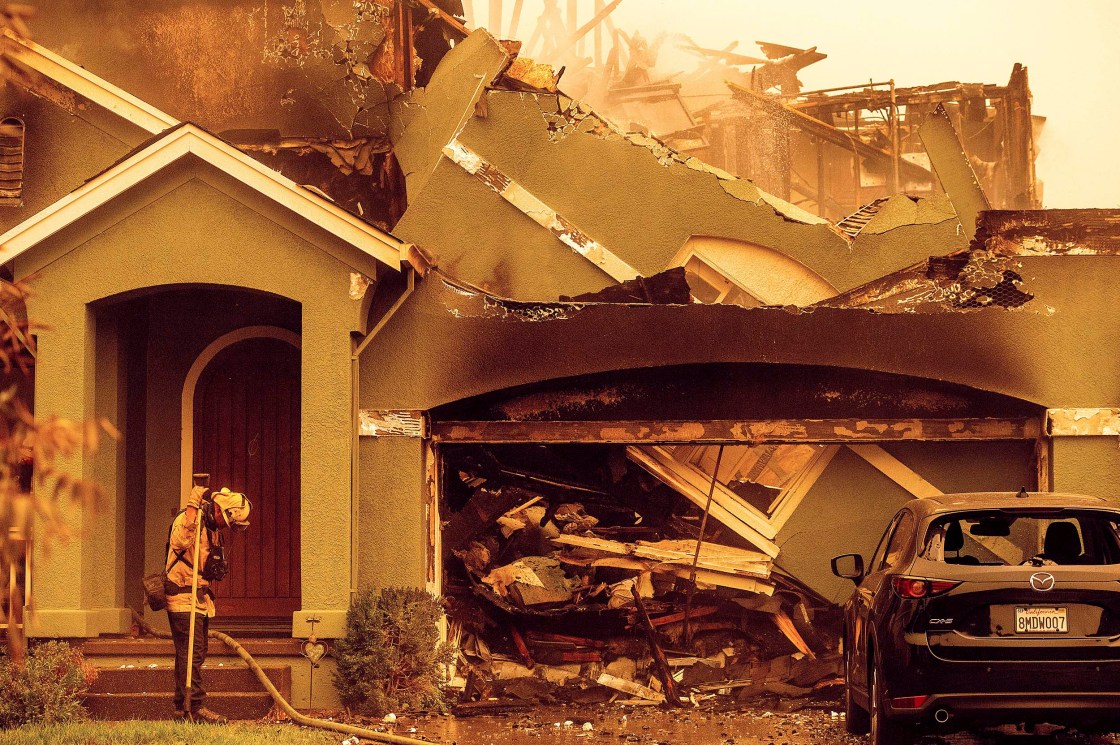 Firefighters worked Tuesday to save the Northern California city of Calistoga as one of the state’s fast-growing wildfires approached, compounding the misery of a deadly fire season that has destroyed numerous homes and left parts of California inhaling unhealthy air for weeks.

The Glass Fire — one of two large blazes that began over the weekend — has forced tens of thousands of people to evacuate homes in the wine country of Napa and Sonoma counties, including Calistoga.

All of Calistoga’s roughly 5,000 residents were ordered to evacuate Monday, as officials feared flames could burn the city, about 55 miles north of San Francisco.

Wildfires in the US: Map and air quality tracker

Police were going through every street to get residents to leave, CNN affiliate KPIX reported late Monday.

Linda Shaver left her home once and came back, thinking her home wasn’t in danger, only to be told to evacuate again, KPIX reported.

“We didn’t take anything out of the car (from the first time),”Shaver told KPIX.

“You’re standing in your driveway and looking at your house and you wonder if you’re going to see it again,” Jim Cunningham, another Glass Fire evacuee, told KPIX Monday at an evacuation center. “The scariest part of it is not knowing.”

The 36,000-acre Glass Fire is one of two blazes sparked in windy conditions early Sunday that have raced through the Northern California countryside.

The other, the Zogg Fire, has torn though at least 40,000 acres in Shasta County southwest of Redding and killed at least three people, Cal Fire officials say, bringing to 29 the number of people killed in California wildfires since mid-August.

California Gov. Gavin Newsom declared a state of emergency Monday night in those three counties because of the relatively new fires. The Zogg Fire alone has destroyed 146 structures and threatens another 1,538, according to Cal Fire.

These blazes are just the latest in a season that already has produced five of the six largest wildfires in California’s history. Little rain, high temperatures and strong winds helped set the stage for the flames and continued to fuel them.

At least 22 large fires are active in the state, according to the National Fire Interagency Center.

Fire burns at wineries and a Michelin 3-star restaurant

The Glass Fire ignited in Napa County and expanded into Sonoma County at a “dangerous rate of spread,” Cal Fire said. It has sent at least 21 people to the hospital for burns or respiratory issues, officials said.

The fire has destroyed 113 structures, damaged two and is threatening 8,543 others, according to Cal Fire.

“The lab is gone, offices are gone, the wine was destroyed,” Sattui told KGO on Monday, adding the threat wasn’t over.

“The fire is 150 yards from here. I’m nervous, I know firefighters are stretched thin working their butts off. I wish they could have saved the warehouse,” Sattui said, according to KGO.

And just outside the Napa County city of St. Helena, the Glass Fire has destroyed a restaurant with three Michelin Guide stars.

The Restaurant at Meadowood, was reduced to rubble despite firefighters’ fierce efforts to quell the flames, including creating assembly lines of hoses and engines to take water from a swimming pool, CNN affiliate KGO reported.

“For now, I want to thank all of the TRAMily that have ever graced this magical space,” the post reads, playing off an acronym for the restaurant, “and all of the guests over the years who have enjoyed the efforts of these multitudes. What an honor it has been.”

The fire also has sent chunks of ash falling from the sky in the Santa Rosa area. Pictures from resident Morgan Balaei showed flurries of ash coming down Monday.

One chunk was so large, “it looked like someone’s toupee,” Balaei said.

More than 70,000 people have been ordered to evacuate in Sonoma and Napa counties as hot, dry winds pushed flames from the Glass Fire into neighborhoods and vineyards, consuming homes and other structures.

One of three shelters for those fleeing the Glass Fire, the Sonoma Marin Fairground, reached capacity early Monday, KGO reported.

Evacuees told KGO they didn’t know if their homes were destroyed by the fast-moving flames.

“Don’t know … all we know is it jumped over Highway 12 over into Oakmont,” Vallie and Tony, who did not give their last names, told the affiliate. “We just heard more and more sirens.”

“People have different needs,” Keaney told the affiliate. “We have automobiles, a car camping area, RV’s another place — we’re just trying to make it accessible for everyone once they arrive here.”

She said that about 160 evacuees from a senior living facility in Santa Rosa are temporarily staying inside several buildings spaced 8 feet apart, KGO reported.

Ed Wayne told the affiliate that he came to the evacuation shelter to help out.

Kathy Guthormsen said she was also worried about her community after hearing her friends evacuated from the Santa Rosa Bird Rescue Center, according to KGO.

“Several of them had to leave their homes in the middle of the night,” she told the affiliate.

When asked if she was scared, Guthormsen told KGO. “Yes … as they say you hope for the best and prepare for the worst.”

Smoke from California’s many fires has hung over swaths of the state for weeks. Authorities have issued air quality alerts for parts of Northern California and the San Joaquin Valley on Tuesday.

As of Tuesday morning, more than 3.7 million acres have burned in 8,136 fire incidents in California this year, Cal Fire said.

A red flag warning for Northern California expired Monday night, but low humidity and winds are expected to continue across the North Bay Area, according to the National Weather Service.

The state will enact changes to help prevent and battle fires, the governor said Monday.

Details are expected in the coming weeks, but Newsom said they will include predictive fire analysis, which will allow for pre-positioning firefighting equipment and teams based on weather patterns, infrared technology, more cameras, and new equipment for both air suppression and traditional ground firefighting. Much of that new equipment has been procured, but not yet delivered, the governor said.

He also said a new partnership between the state and the federal government is expected to provide more funding and cooperation in management of the vast federal wildland in California.

“There’s a lot of progress. We are not just standing still. We’re not just victims of fate,” Newsom said. “We want to shape this future.”