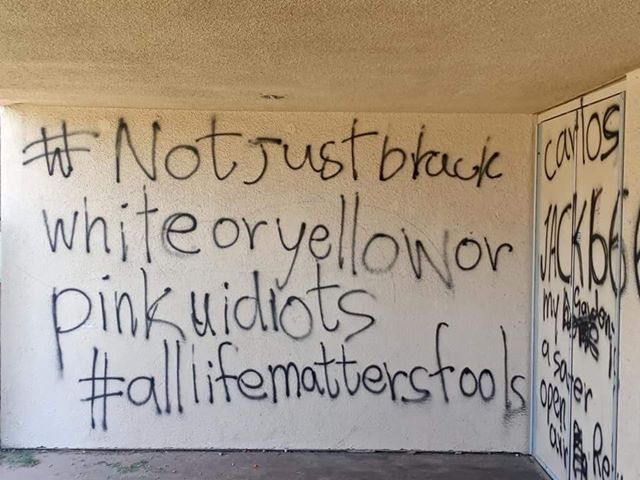 INDIO (CNS) – A 45-year-old man accused of spray-painting racist and anti-LGBTQ graffiti and causing other property damage on a community center in Palm Springs pleaded not guilty Tuesday to felony and misdemeanor charges.

Charinda Godakanda of Palm Springs remains out of custody on $10,000 bail stemming from his arrest on July 7 outside the vandalized James O. Jessie Desert Highland Unity Center at Desert Highland Park.

Godakanda is charged with grand theft and carrying a concealed dirk or dagger, both felonies, and two misdemeanor vandalism counts.

The defendant was arraigned before Riverside County Superior Court Judge Harold Hopp, who kept his bail as set and scheduled a felony settlement conference for Nov. 2 at the Larson Justice Center in Indio.

According to a declaration in support of the arrest warrant filed by Palm Springs Police Department Detective Francisco Salgado, officers were sent to 480 Tramview Road at about 5 a.m. July 7 following a reported fire in the area.

Center staff told police that signs and an electric car charging station were also damaged, and the cost to repair it totaled $4,176, the declaration states.

According to center manager Jarvis Crawford, tires and rocks were thrown at the community center, which had been closed for several months at that point due to the COVID-19 pandemic. Multiple windows were also broken, he said.

Following his arrest, Godakanda emailed local media outlets a statement in which he apologized for the vandalism, citing his ongoing mental health struggles.