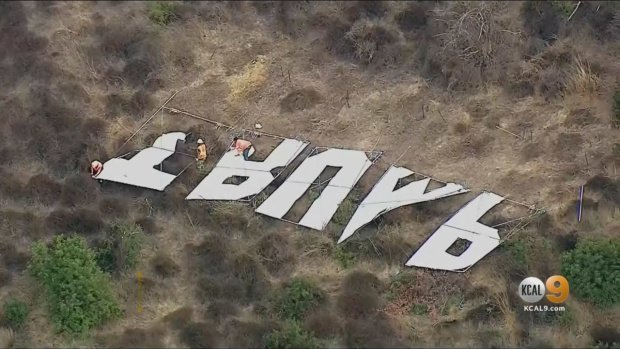 Los Angeles, CA (KCAL/ KCBS) — The swift removal of a massive “Trump” sign in the style of the iconic Hollywood sign along the 405 Freeway in the Sepulveda Pass has some on social media calling foul.

“What’s new in California, so typical! Same reason why I can’t have my Trump flag up in my neighborhood; I’m afraid of vandalism but five blocks over there’s 2 BLM signs that we’re all respectful of,” one Twitter user wrote.

“I would sue the city for not allowing freedom of speech! It’s no freaking different then the Hollywood sign or a fire in the pass! If it had read Biden it would of been left up,” another user said.

But the California Department of Transportation, which removed the unauthorized sign, said it was taken down because it was a distraction and a safety hazard.

But even though the sign’s message was short-lived, it definitely got people talking.

“If you’re a Trump supporter in California, you’re very much aware that you’re in the minority, so Trump supporters may figure they need to take extraordinary steps to get attention,” Jack Pitney, a professor at Claremont McKenna College, said. “If someone put a Trump sign up in Alabama, wouldn’t be a news story. In California, which accounted for Hillary Clinton’s popular vote margin nationwide four years ago, it gets some attention and that probably was the point.”

And while some were upset about the sign’s swift removal, others said they were happy it was taken down.

“It comes down to what you believe and what you support,” Cody James, a Biden supporter, said. “And, for me, the Trump stuff is not it.”

Though, James admitted, he would have been OK with a sign that said Biden.

Requests for comment from the owner of the property were not immediately returned.