There are two candidates in the competitive race for Cathedral City District One.

The incumbent is Rita Lamb, sworn into office 2019, who has been filling the seat vacated by the death of former Mayor Greg Pettis.

Lamb says she’s now seeking re-election to build on the city’s accomplishments within the last year. 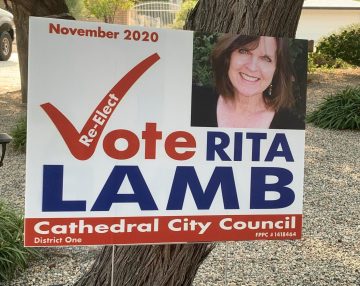 “Our council took decisive action in terms of communicating to our public the seriousness of the Coronavirus, and communicating ways to stop the spread. We also continued to support our vital services for fire and police,” said Lamb.

Lamb is endorsed by the current Cathedral City Mayor and council, and members like Ernesto Gutierrez say she brings fairness and dignity to the position.

“If there’s a lot-line adjustment that’s in the agenda, I go out and take pictures of it so I know exactly what I’m saying. I don’t represent any particular specific special interest group. I want to make sure I make decisions that are in the best interest of the city and moving it forward,” said Lamb.

Running against the incumbent is Alan Carvalho.

Carvalho says, if elected, he believes his progressive voice will be beneficial for the city.

“My husband and I were instrumental in moving the cannabis industry forward in the valley, especially starting here in Cathedral City. And now, we had 21 million dollars in cash reserves as a result of the cannabis industry. Five million of that was used this year to maintain our police, fire and EMTs,” said Carvalho.

While his opponent was part of the unanimous vote to phase out short term vacation rentals in Cathedral City, Carvalho says he has a different viewpoint. 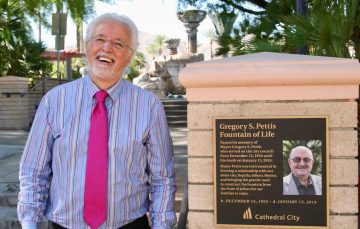 “I’m really in favor of keeping vacation rentals and, again, there’s a lot of fear on council, there’s a conservative movement where they just don’t want to deal with it. So my job is really to convince the council, like I did with my husband back in 2013. Instead of getting a lawsuit, which we’re threatened with multi-million dollar lawsuits, how about we find a way to make it work,” said Carvalho.

And, despite the restraining order Lamb filed against Carvalho last year, both candidates say their exchanges remain professional.

“We had a couple of zoom meetings and of course we say hello, we’re polite,” said Carvalho.

“There isn’t a lot of interaction and crossing paths so it’s fine,” said Lamb.

Both candidates are on the ballot for the Nov. 3 election.

There are also two candidates running for the Cathedral City Council District 2 seat.