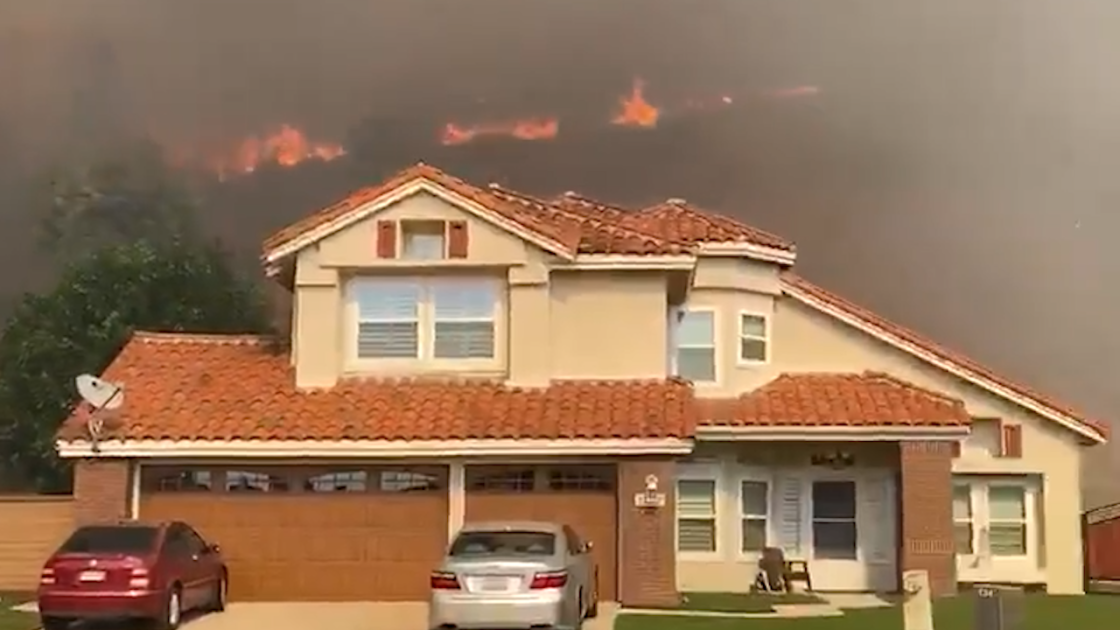 YORBA LINDA (CNS) – A wind-driven brush fire that broke out on the west end of Corona in Riverside County and quickly spread into Orange County — threatening homes in Yorba Linda and blackening 8,000 acres — was 0% contained Tuesday.

Initially called the Green Fire and later renamed the Blue Ridge Fire, the blaze was reported at 12:55 p.m. Monday adjacent to the Green River Golf Club, just off of Green River Road and the Riverside (91) Freeway, according to the Corona Fire Department.

Ten homes were damaged in the blaze, but the location and extent of damage were not immediately available, according to the Orange County Fire Authority, which added that more than 1,000 firefighters were battling the blaze.

As the San Bernardino County city of Chino Hills moved to get residents out, some complained about difficulties understanding what areas were covered by the evacuation order just before 9 a.m.

“Post a map of the areas that need to evacuate,” TheDudeAbides1998 replied on Twitter to the City’s evacuation announcement. “The site is NOT working and this post is not helpful.”

User Angela Villalpando seemed to be experiencing a similar concern.

“Please post an updated map of the areas,” Villalpando wrote. “You keep telling people to go to the site, but it isn’t updated, and it’s lagging because everyone is trying to see if they are evacuated.”

The miscommunication appeared to be due to specific evacuation boundaries not appearing as text along with the interactive map showing the area covered by the order.

The new evacuations follow ones announced by the OCFA at about 11 p.m. Monday for residents living in thousands of homes in the following areas:

— The Hidden Hills community and Yorba Linda, north of the Riverside (91) Freeway, east of Gypsum Canyon;

— All of Carbon Canyon from the county line to Summit Ranch in Chino in San Bernardino County;

There were no evacuation orders or warnings for Corona, according to the OCFA.

The high winds grounded aircraft used to battle fires for most of the day, but by late Monday afternoon, a DC-10 was up in the air making air drops in Yorba Linda, Fennessy said.

“But we’re also told we can expect (winds) to increase in the early morning hours until they die off sometime tomorrow (Tuesday) afternoon,” OCFA Chief Brian Fennessy said.

The head of the fire entered Orange County about 1:20 p.m. Monday, and the flames raced toward Yorba Linda, posing a threat to scores of residences.

By Tuesday morning Chino Hills authorities said they were hopeful about the response since winds are predicted to average around 10 miles per hour with gusts of only 20 miles per hour. That means water bombers could be used if conditions don’t deteriorate, the spokesperson said.

A grant from the Federal Emergency Management Agency was secured Monday by Gov. Gavin Newsom. The grant will assist local and state agencies responding to the fire to apply for 75% reimbursement of their eligible firefighting costs.