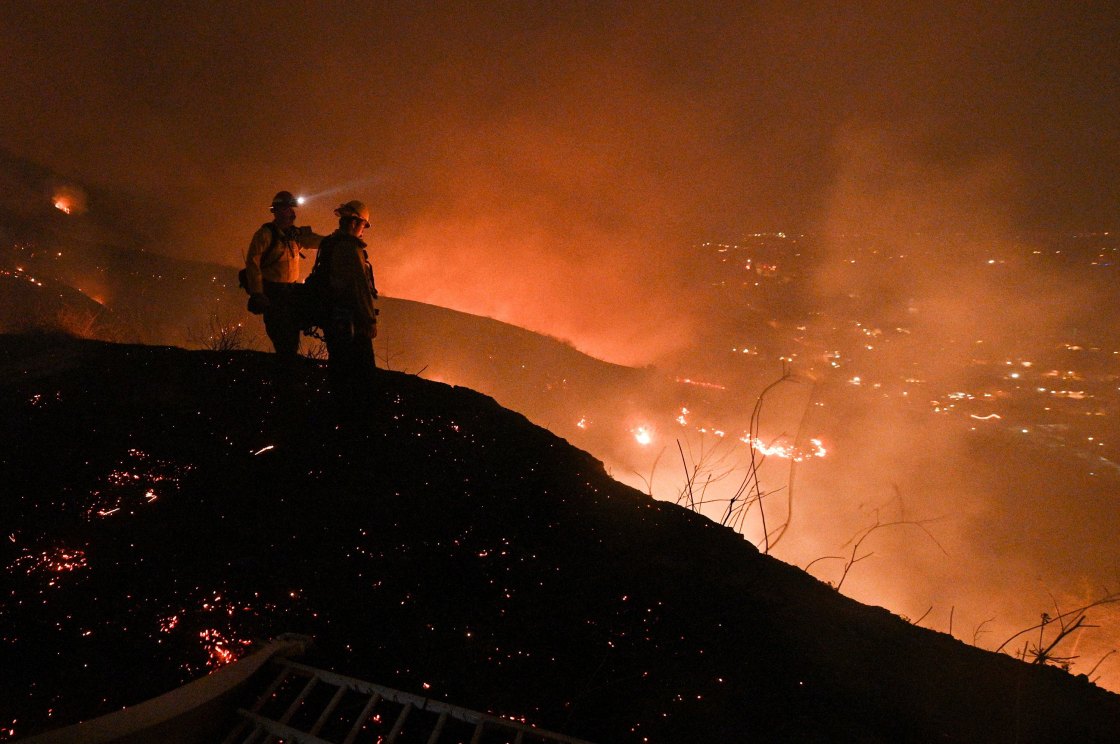 The injured firefighters are 26 and 31 years old. Both sustained second- and third-degree burns about 12:15 p.m. Monday, one over 65% of the body and the other over half the body, according to Orange County Fire Authority Chief Brian Fennessy. Both firefighters were intubated at OC Global Medical Center in Santa Ana, he said.

“I got an opportunity to talk to members of their families and spend time with both firefighters in the emergency room while they were being treated, but they were not in a position where they could speak with me,” Fennessy said.

“Please keep these firefighters in your thoughts and prayers, and their families. We’re going to do the same.”

The two firefighters were “at the heel of the fire where it started,” he said.

“I know them personally,” Fennessy said. “They’re gravely injured. Their families are with them. I was with them when their families arrived. Obviously, it’s very emotional. We’re giving them all the support we can.”

Evacuation orders have been issued for the Jackson Ranch and Williams Canyon area, the OCFA said at 6:39 a.m. Tuesday

Silverado, Modjeska, and Trabuco Canyons along Live Oak Canyon are under evacuation warning, a spokesperson for the agency said.

At 6:40 a.m. the OCFA announced an evacuation warning for Mission Viejo in the areas of El Toro Rd (to the north), Marguerite Parkway (to the east), Upper Oso Reservoir (to the east), and Los Alisos Boulevard (to the south)

Yet, firefighter have begun to make progress on getting the flames under control, and the wildfire is now 5% contained, the agency said.

It erupted at 6:47 a.m. Monday in the area of Santiago Canyon and Silverado Canyon roads, Fennessy said.

Edison sent a letter to the California Public Utilities Commission Monday night acknowledging it had overhead electrical facilities in the area where the blaze broke out.

“We have no indication of any circuit activity prior to the report time of the fire, nor downed overhead primary conductors in the origin area,” SCE said in the letter. “However, it appears that a lashing wire that was attached to an underbuilt telecommunication line may have contacted SCE’s overhead primary conductor which may have resulted in the ignition of the fire.”

Irvine Police Department Chief Mike Hamel said city officials were working with the American Red Cross to provide overnight shelter for residents with no place to go. The city’s animal shelter was open to house pets.

“We’ve been fortunate to not lose any structures yet,” Fennessy said Monday evening.

High winds compromised the aerial firefighting effort, with all aircraft grounded by mid-morning Monday due to gusts, which rendered water drops ineffective while also making flying treacherous for pilots. Winds of 20 mph-40 mph were reported, with gusts up to 60 mph.

“This is a tough fire,” Fennessy said. “We’re experiencing very high winds, very low humidity… Any time winds are that bad you can’t fly, and that certainly has an impact on both hand crews and bulldozers and firefighters at the end of those hose lines.

“Air attack is very important, but still it’s the firefighters on the ground that put out that fire.”

According to the city of Irvine, evacuation centers were established at:

By late morning, many of the centers were filled, and another shelter was established at Village Church of Irvine, 77 Post.

All schools in the Irvine and Tustin Unified school districts will be closed Tuesday, including distance learning classes in Tustin Unified.

Although structures were reported to be threatened and there were some reports of buildings already burned, fire authorities have not confirmed any structural damage as of Monday night. Aerial footage from the scene showed fire crews dousing flames that appeared to have destroyed a commercial structure near the 241 toll road.

The southbound Riverside (91) Freeway to the Foothill Transportation Corridor (241) toll road was closed and the northbound 241 was closed at Portola.

The Riverside (91) Freeway was also closed in the area north of the 241 Freeway.

The fire sent a major plume of smoke over the entire region, creating unhealthy air across a wide area.