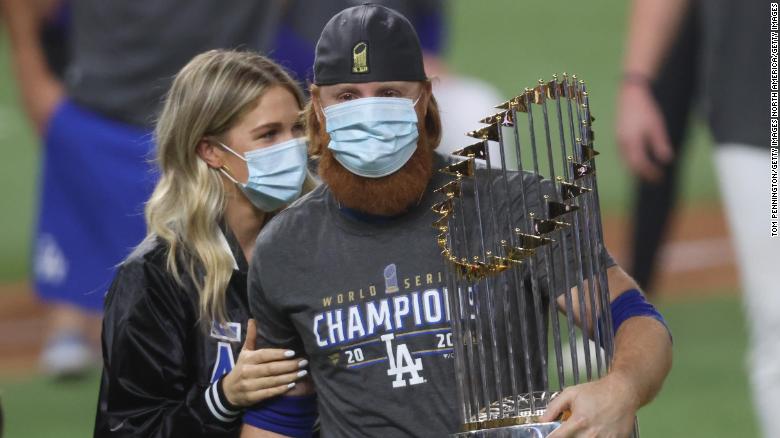 Five members of the Los Angeles Dodgers organization and one family member have tested positive for COVID-19. Right now, all we know is that most people who had tested positive for the virus were outside of the MLB World Series bubble in Arlington, Texas as reported by USA Today. This news comes right after the MLB announced the conclusion of its investigation into Justin Turner returning to the field to celebrate winning the world series after finding out that he was positive for COVID-19. It is unclear at this time if Turner or any players are among the five people.

Awards and records don’t mean a whole lot until you can be called a “Champ!” So many people to thank but no one more than my teammates, coaches and staff who grinded it out from start to finish and this amazing woman (@court_with_a_k ) who has been by my side through it all! #2020WorldChamps

Major League Baseball has completed its investigation into what happened with Justin Turner during the world series celebration. The Dodgers found out Turner tested positive for COVID-19 during game six and immediately pulled him from the game. However, Turner returned to the field after the game to celebrate. After investigating, league officials say several teammates encouraged him to return to the field. Turner also thought he had permission to return as he was not stopped by team personnel. The MLB decided to not punish Justin Turner or the Dodgers, they also admitted that they could have handled the situation better on their end.

The NFL is fining the Las Vegas Raiders once again for COVID-19 protocol violations. The Raiders are being fined $500,000 and head coach Jon Gruden $150,000 in addition to stripping the team of a 6th round draft pick. The escalated fines and loss of a draft pick are due to the Raiders being a repeat offender of COVID-19 protocols.

The PAC-12 football season kicks off tomorrow, they are the last power-five conference to return to action. However, due to COVID-19, not all the PAC-12 scheduled match-ups will be played. The CAL and Washington game has been canceled, with CAL unable to field a competitive roster due to one player testing positive for covid-19 and several other players being placed in isolation due to contact tracing. The Utah–Arizona game has also been canceled. It seems that Utah can’t field the minimum number of scholarship players because of recent COVID-19 cases and isolations as well. Under conference rules, these games will not be made up and are declared a no-contest.

The Boston Red Sox have named Alex Cora as their new manager. Cora will try to lead them to a World Series title as he did in 2018. Hopefully, without a scandal. Cora was dismissed from the Red Sox in January after his role in the Houston Astros 2017 sign-stealing scandal became evident.

Professional Mexican boxer, Canelo Alvarez is officially a free agent, he has been released from his contract with Golden Boy. According to ESPN’s Salvador Rodriguez, representatives for Alvarez and Golden Boy promotions have reached an agreement to release the four-time champion. Chairman of Golden Boy, Oscar De La Hoya, said in a statement that the split was amicable and he wishes Canelo Alvarez the best. Alvarez recently tried a lawsuit against Golden Boy and DAZN, a streaming service, in regards to a breach of contract issue. That lawsuit is also confirmed to be squashed at this time, according to De La Hoya. ESPN also reported that Alvarez and his team are targeting a return to the ring on Dec. 19 against IBF super middleweight titlist Caleb Plant.