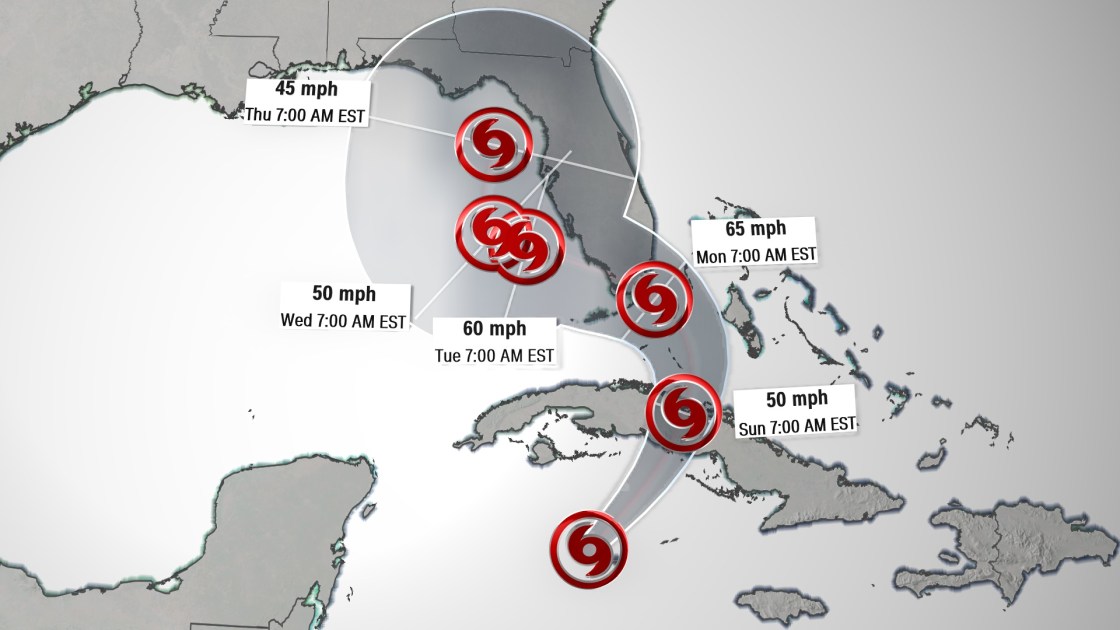 (CNN) — Tropical Storm Eta made landfall in the Florida Keys late Sunday night and will continue to bring hurricane conditions to the area throughout Monday.

Eta previously made landfall on the south-central coast of Cuba early Sunday.

Eta had maximum sustained winds of 65 mph when it struck on Lower Metacumbe Key Sunday night, according to the National Hurricane Center (NHC).

The tropical storm was expected to bring isolated maximum rainfall totals of about two feet, the NHC said.

The amount of rain is likely to lead to life-threatening flash floods and landslides, as well as a storm surge that will raise water levels by as much as 2 to 4 feet above normal tides along the coast, according to the NHC.

“On the forecast track, the center of Eta will pass near or over the Florida Keys tonight and early Monday, and be over the southeastern Gulf of Mexico late Monday and Tuesday,” the NHC said.

A hurricane warning has been issued for the Florida Keys from Ocean Reef to the Dry Tortugas, including Florida Bay.

The Florida Keys could see storm surge flooding in the 2 to 4 feet range with rainfall of 6 to 12 inches throughout, according to a Monroe County Joint Information Center 6 p.m. Eta update.

Portions of Monroe County may have isolated maximum rainfall closer to 18 inches through Wednesday evening, the update said.

“Rainfall flooding may be compounded by coastal flooding in some areas, with neighborhoods prone to poor long-term drainage likely to have flooded streets for a few days,” according to the National Weather Service Key West.

Heavy rains and flooding in Oakland Park, Florida, has the city’s public works system “at or near capacity” already, according to Oakland Park Public Information Officer David Rafter.

“Oakland Park Public Works and Parks personnel have been working throughout the night and all day addressing the flooding concerns to the best of our ability,” Rafter said in an Tropical Storm Eta update.

At least five school districts in south Florida, including Miami-Dade, will close on Monday due to Eta’s potential impact, the districts announced on social media.

In Miami-Dade, all bridges have been locked down, Mayor Carlos Gimenez said. He said to expect 40 to 60 mph winds beginning Sunday at 4 p.m. through Monday at 2 p.m., as well as the possibility of tornadoes.

A tropical storm warning also is in effect for the Cayman Islands and the northwestern Bahamas.

Eta made landfall along the coast of Nicaragua as a Category 4 hurricane on Tuesday afternoon. It brought more than 2 feet of rain to parts of Nicaragua and Honduras last week.

In Latin America and the Caribbean, emergency disaster plans are currently in place in Cuba and Mexico while evacuation and relief efforts continue in Guatemala and Honduras, which have been the hardest hit so far, with dozens dead or missing.

In Honduras, at least 38 people died and eight are missing, according to the country’s Permanent Contingency Commission. More than 60,000 people have been evacuated from their homes, the commission said, and more than 1.8 million people nationwide have been impacted by the storm.

In Cuba, the country’s Civil Defense updated its warnings on Saturday and issued an “Alarm Phase” for several western and central areas.

“In the face of Eta, there is no time to waste and protection is the priority,” Cuban President Miguel Díaz-Canel tweeted on Saturday.

In Mexico, the National Meteorological Service said Eta’s “broad circulation is causing intense to torrential rains on the Yucatan peninsula and in southeastern Mexico.” The rain is expected to last through Monday, the service said, and will affect the states of Chiapas, Oaxaca, Quintana Roo, Tabasco and Yucatán.

Mexican President Andrés Manuel López Obrador suspended his initially planned visit to the states of Nayarit and Sinaloa, and traveled instead to Tabasco state on Saturday, due to flooding and meteorological conditions linked to Eta.

Lopez Obrador warned of a potential “emergency situation” in Tabasco as widespread flooding from Eta is expected, and said he is calling an emergency meeting of the Security Cabinet.

“We are talking about rainfall never seen before” in the area, López Obrador said in a video message posted on his official Twitter account.

López Obrador said emergency preparations are underway so that destruction and the loss of human life can be prevented.

Florida Gov. Ron DeSantis declared a state of emergency for eight counties on Saturday as Eta approaches, according to Fredrick Piccolo Jr., communications director for the governor.

The governor declared the emergency for Broward, Collier, Hendry, Lee, Martin, Miami-Dade, Monroe and Palm Beach counties in south Florida “out of an abundance of caution,” Piccolo said. The counties include the cities of Miami, West Palm Beach, Fort Lauderdale, Fort Myers and Key West.

A tropical storm warning is in effect for the Florida coast from Brevard/Volusia County line to Englewood, including Florida Bay, as well as Lake Okeechobee.

“Recent heavy rain across the region has led to saturated ground and urban flash flooding could become a threat by the end of the weekend and into early next week depending on the forward movement of the storm,” CNN meteorologist Derek Van Dam said.

A flood watch is in effect for much of southern Florida through Tuesday evening.

Mayor Gimenez declared a state of emergency Friday as Miami-Dade monitors the storm. Gimenez said the ground is already saturated from days of rainy conditions so “flooding is a major concern.”