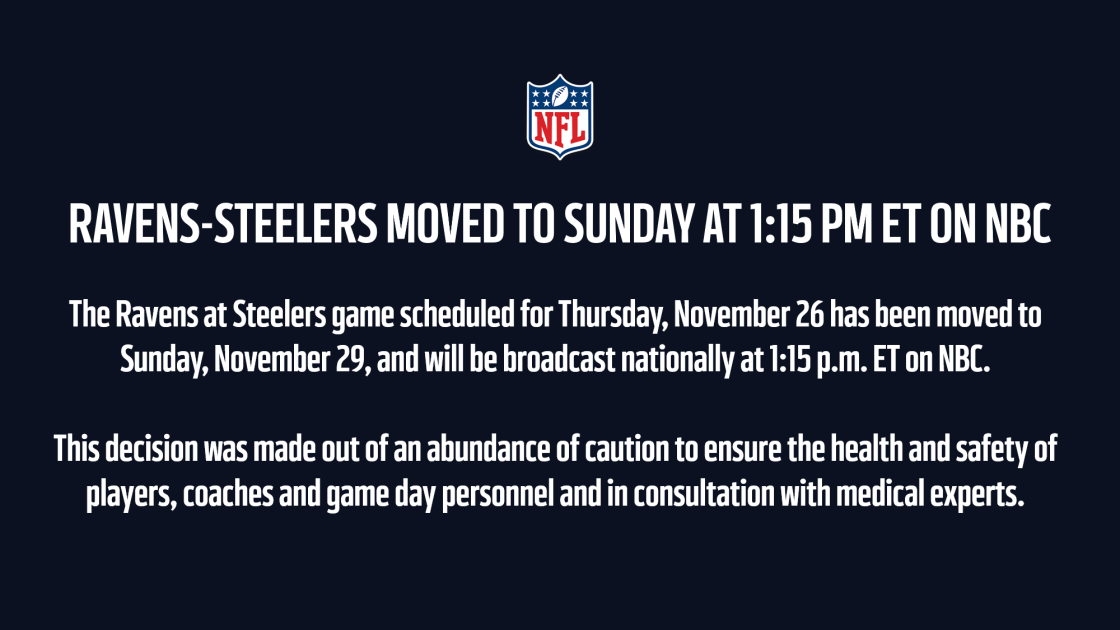 The Baltimore Ravens-Pittsburgh Steelers game scheduled for Thanksgiving night has been postponed and moved to Sunday due to positive Covid-19 cases within the Ravens organization, the NFL said.

“This decision was made out of an abundance of caution to ensure the health and safety of players, coaches and game day personnel and in consultation with medical experts,” the NFL said in a statement.

No kickoff time has been announced for the game yet.

The Ravens announced on Monday that multiple members of the organization tested positive for coronavirus, and that all team activities would take place virtually. Those members immediately began to self-quarantine, and the team began the contact tracing process.

“We appreciate the NFL for its diligence in working closely with us to ensure the well-being of players, coaches and staff from both the Baltimore Ravens and Pittsburgh Steelers organizations,” the Ravens said in a statement. “Protecting the health and safety of each team, in addition to our communities at large, is of utmost importance. We will continue to follow guidance from the NFL and its medical experts, as we focus on safely resuming preparations for Sunday’s game.”

Several members of the Steelers voiced their disappointment with the decision to postpone the game on Twitter, with Steelers receiver Chase Claypool tweeting “What a joke….”

“First the NFL takes away our bye week because another team can’t get their Covid situation together, now they take away our Thanksgiving primetime game for the same reason. Smh,” Smith-Schuster wrote.

The NFL is losing its marquee matchup on Thanksgiving, as the two AFC heavyweights were set to be the primetime game on Thursday evening.

The Houston Texans at Detroit Lions at 12:30 p.m. ET and Washington Football Team at Dallas Cowboys at 4:30 p.m. ET are still on as scheduled for tomorrow.