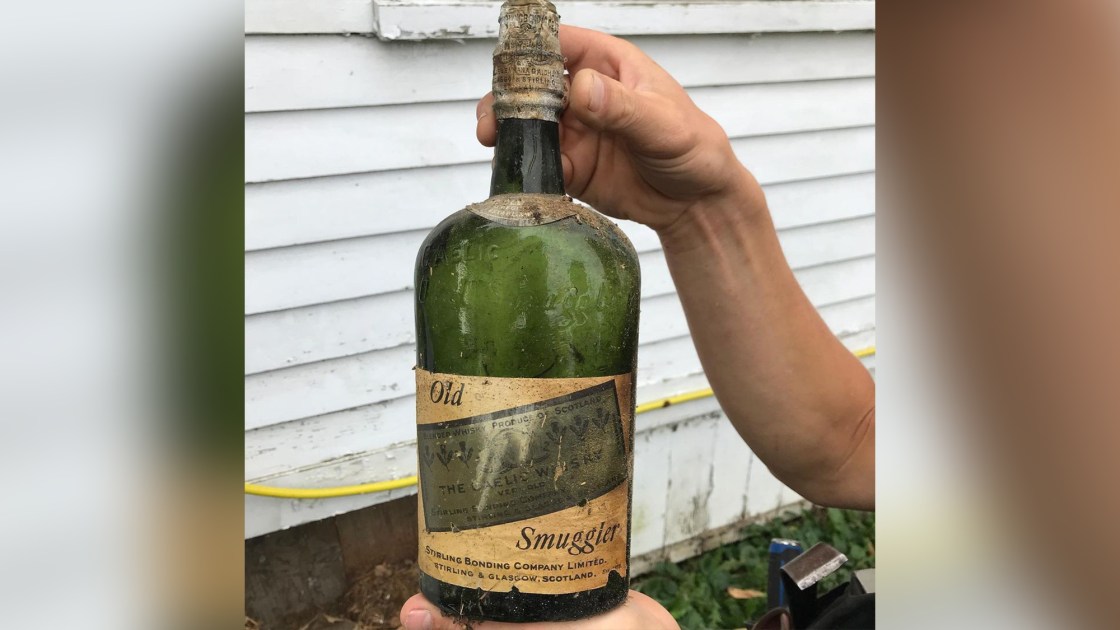 (CNN) — When a New York couple was told their over 100-year-old home was built by a notorious bootlegger, they passed it off as small town legend.

But during a recent home renovation, the couple discovered something that revealed the legend could be true.

In early October, Nick Drummond and Patrick Bakker said they found more than 66 bottles of whiskey from the Prohibition-era hidden within the walls and floorboards of their home, which was built in 1915.

“Our walls are filled with bundles of booze!” Drummond, who documented the unexpected find in a series of posts on social media, wrote on his Instagram. “I can’t believe the rumors are true! He was actually a bootlegger! ”

The couple had been living in the house nestled in the small village of Ames, located about three hours away from New York City, for a little over a year before they decided to begin major renovations two months ago.

Drummond, a designer and historic preservationist, told CNN he was removing outside skirting along the bottom of the mudroom attached to the house when a mysterious package fell out.

“I’m like what is that? I’m very confused,” he said. “I’m looking and there’s hay everywhere, there’s paper, and glass … I see another package and it’s this whiskey bottle.”

Drummond went on to find more packages of smuggled whiskey under the floorboards after entering the mudroom through a uncovered hatch inside the floor. He said the couple continues to find more bottles.

“Initially we found seven bundles of six in the wall and then at that point we found four more bundles and actually funny enough as of less than a week ago we just found more,” said Drummond.

The liquor is a brand of Scottish whiskey labeled Old Smuggler Gaelic whiskey, which is still made today. Each bottle was wrapped in tissue paper and straw and bundled in a package of six, said Drummond.

The original owner of the house was a German man known as Count Adolph Humpfner.

After researching newspaper articles and various legal websites, Drummond said he found out that Humpfner was known to be a man of mystery in the town and took part in many scandals. He died a sudden death and left behind the smuggled liquor, as well as a heavily disputed fortune.

The series of discoveries lead Drummond to continue documenting his home renovation on social media. Followers have reached out to participate in learning new history about the home and its bootlegging owner.

The couple said they will keep one of the full bottles of whiskey to taste test.