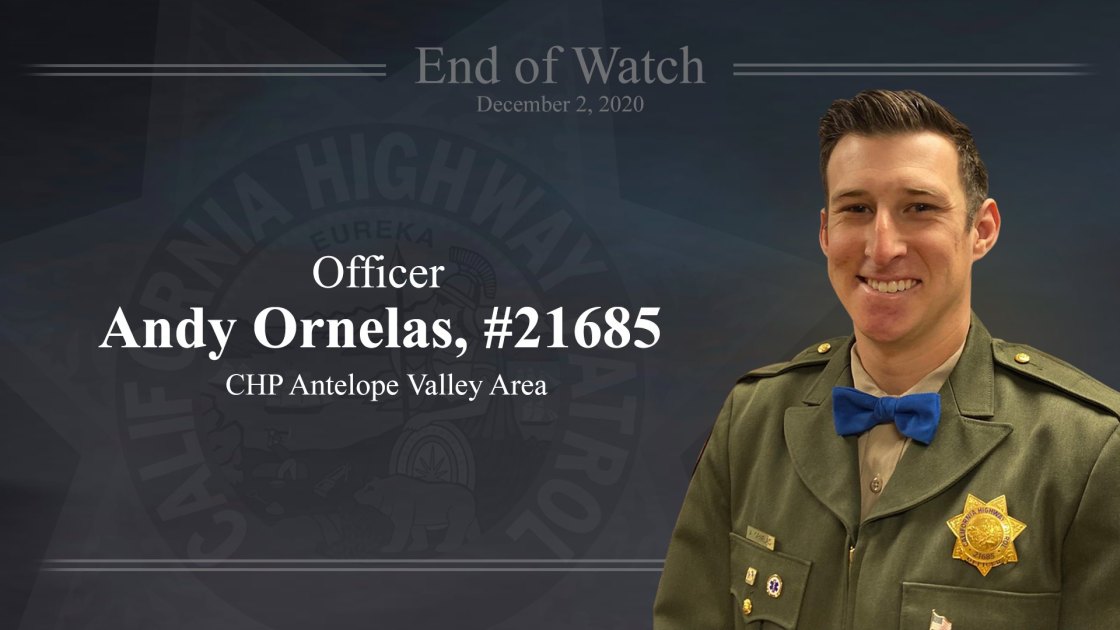 PALMDALE (CNS) – The California Highway Patrol commissioner held a virtual bell toll tribute ceremony Thursday for a motorcycle officer who died from injuries sustained when he was struck by a pickup in Palmdale while on his way to the scene of a collision on the Antelope Valley (14) Freeway.

The ceremony was held by CHP Commissioner Amanda Ray, along with CHP Academy officers and employees.

Ornelas was thrown from his motorcycle and rushed to Antelope Valley Hospital, where he died Wednesday morning.

The 27-year-old officer, who had been with the CHP for four years, is survived by his wife Taylor; his mother, retired CHP Officer Kellie Ornelas; his father, Los Angeles Police Department Officer Arturo Ornelas; his brother, CHP Officer Cody Ornelas; and his sister, Nikki Ornelas. His uncle, Andreas Ornelas, is a retired CHP captain.

Several agencies in the Los Angeles area shared their condolences on Twitter.

“An LAPD officer mourns the loss of his son Andy, as does the entire LAPD family,” LAPD Commanding Officer Gerald Woodyard wrote. “A grateful community honors CHP Officer Andy Ornelas … as he has made the ultimate sacrifice. Keep the family, friends and loved ones in your prayers, during this unthinkable tragedy.”

The Lancaster sheriff’s station tweeted: “With the heaviest of hearts we share that AV Officer Andy Ornelas ended his watch earlier today. Our thoughts and prayers are with our friends at CHP-Antelope Valley and Officer Ornelas’ friends and family.”

With the heaviest of hearts we share that AV Officer Andy Ornelas ended his watch earlier today.

Our thoughts and prayers are with our friends at CHP – Antelope Valley and Officer Ornelas' friends and family.#LASD #AV411 #myherowearsabadge @CHPANTELOPEVALL pic.twitter.com/L3o4A2jpin

Gov. Gavin Newsom issued a statement saying he and his wife, Jennifer, “extend our heartfelt condolences to the family, friends and fellow officers grieving the devastating loss of Officer Ornelas. California is grateful for Officer Ornelas’ dedication to carrying on his family’s tradition of public service and honors his work to keep our communities safe.”

Capitol flags will be flown at half-staff in Ornelas’ honor, according to the governor.

A memorial fund that will be given directly to Ornelas’ wife was established by the CAHP Credit Union. Those wishing to donate can visit https://bit.ly/3lyjpWK.