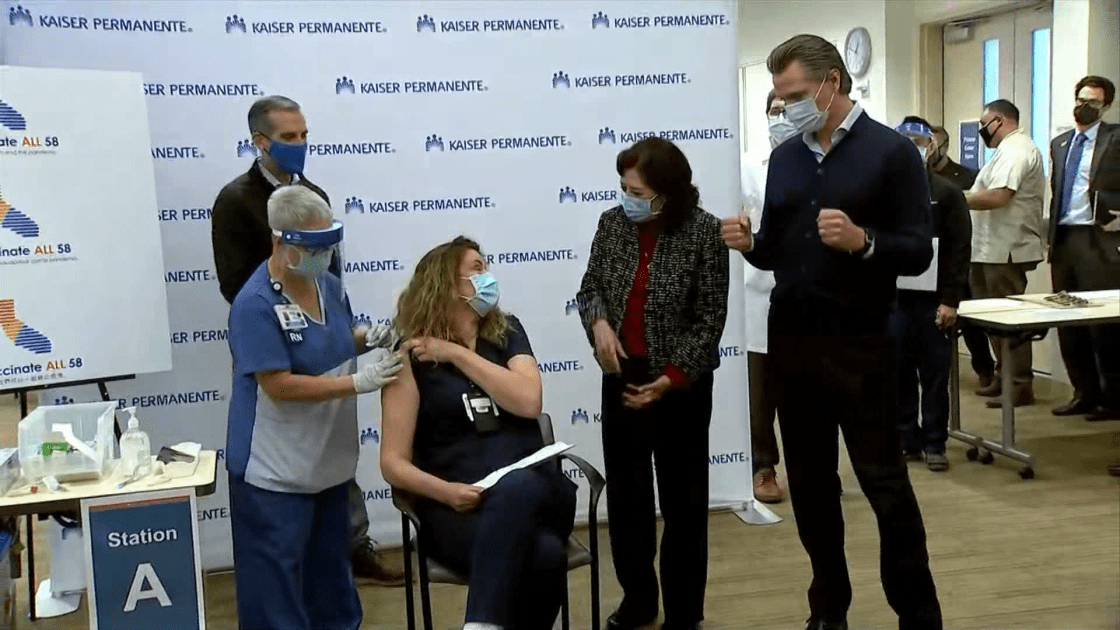 COVID-19 Vaccinations Begin In Southland, But Virus Fight Goes On

LOS ANGELES (CNS) – With her co-workers cheering her on, an intensive-care unit nurse at Kaiser Permanente Los Angeles Monday received one of the first doses in the state of a long-awaited vaccine to prevent COVID-19.

Helen Cordova sat patiently and joked with other medical personnel as she was given the Pfizer vaccine — administered with a shot in her right arm. Thousands of doses of the vaccine arrived at Los Angeles International Airport Sunday night, marking the first step in a massive undertaking that will see the county attempt to vaccinate 6 million people in six months, beginning with critical health care workers.

LAX officials trumpeted the arrival of the vaccine on Twitter, posting photos of the FedEx jetliner carrying the vaccine, which received formal approval from federal authorities over the weekend for immediate use.

Gov. Gavin Newsom was among the elected officials on hand at the Kaiser Permanente facility in Hollywood to watch Cordova’s inoculation. Moments later, he tweeted, “History made.” Four other Kaiser workers were also vaccinated as cameras rolled.

“We front-line workers have been working around the clock over the past nine months, sacrificing so much of what we do and love to take care of our patients,” Kaiser emergency room nurse Kim Taylor said after receiving a dose. “We’ve been doing this while trying to take care of our own families and keep them safe. What I want you guys to know is that help is on the way. Today is just a first step. Soon more vaccines will be distributed to the front-line workers and our most vulnerable populations.”

She stressed the safety of the vaccine, and said that while the vaccine is offering hope, “the best way you can support us nurses right now is to continue wearing a mask, maintain physical distance, stay home for the holidays and wash your hands.

“We can’t win this fight alone,” she said. “We need your help to keep our numbers down and to slow this spread of COVID-19.”

Newsom and other elected officials gathered at Kaiser Permanente to watch the initial doses also stressed that while the vaccine offers hope, there is a long way to go in the coronavirus fight.

“We are marching through the horror of this moment,” Mayor Eric Garcetti said. “There’s no way around that, with 10 times the cases we had just six weeks ago in this county. But today, we’re also marching through the hope of this moment. And we hold that horror and that hope together — the horror reminding us that while we celebrate today, don’t let up. Don’t stop doing what’s right, and keeping that distance and wearing that mask, … making sure you wash your hands, and stay away from each other. It is not the time to let up.”

Pfizer and U.S. officials said the vaccine has been found to be 95% effective in preventing COVID-19.

Army Gen. Gustave Perna of Operation Warp Speed told reporters Saturday that UPS and FedEx would be delivering the vaccine to nearly 150 distribution centers across the country.

According to Newsom, 33,150 vaccine doses were received at four sites in California as of Monday — Los Angeles, San Diego and two sites in Northern California. Vaccines will arrive at 24 more sites statewide Tuesday, and five more on Wednesday. For context, Newsom noted that the 33,150 doses received as of Monday roughly equated to the number of new COVID-19 cases confirmed across the state in the past day.

The state is expected to receive 327,600 doses in the first allotment. Pending federal approval of the Moderna vaccination, the state could receive another 672,600 doses within a week, and as many as 2.16 million doses by the end of the year.

Los Angeles County’s initial allotment of vaccine is expected to be 82,750 doses, a population-based percentage of the state allocation. The county’s vaccines will be dispersed to nine ultra-cold storage facilities. Those facilities will then distribute the doses to 83 acute-care hospitals, which will then oversee its administration to selected critical frontline workers.

UCLA Health officials said they expected to get the vaccines Monday or Tuesday, with shots administered on Wednesday.

“UCLA Health is implementing comprehensive and detailed plans to receive, store and administer COVID-19 vaccinations. We anticipate a limited number of doses arriving in the next day or two, with additional supplies to follow. We have been designated as a regional hub for distribution to other acute-care hospitals,” a UCLA Health statement said.

Officials with Cedars-Sinai Medical Center said they had no definitive information yet on when they would be receiving the vaccine.

According to Newsom’s office, a Western States Scientific Safety Review Workgroup — a group of experts created by governors of California, Nevada, Oregon and Washington to independently verify the safety of any vaccine — concluded its review of the Pfizer vaccine Sunday and confirmed it is “safe and efficacious.”

The Pfizer vaccine was co-developed by German partner BioNTech. It needs to be stored at minus-94 degrees Fahrenheit.

Last week, L.A. County Public Health Director Barbara Ferrer said that the county hopes to receive its second allotment — roughly 250,000 doses of the Moderna vaccine, pending FDA approval — around Dec. 20-21. Much of that second dose allotment will be distributed directly skilled nursing facilities, allowing them to administer it right away instead of waiting for a federal distribution agreement with CVS and Walgreens to begin on roughly Dec. 28.

Long-term care facilities will still receive the vaccine through CVS and Walgreens.

The county anticipates receiving another 150,000 doses of vaccine by the end of December, followed by weekly allotments of 250,000 beginning in January. Both vaccines require two doses, separated by about three weeks. With the county planning to vaccinate 6 million people in six months, that equates to 12 million doses of vaccine.

After the distribution of vaccines to health care workers, skilled nursing facilities and long-term care staff and residents is completed, priority will then move to “essential workers” and then to people at highest risk of severe illness from the virus, such as seniors or those with underlying health conditions.

Distribution to the general public will follow, but the timeline on when that will occur remains cloudy.

The county’s chief science officer insisted Thursday the process will be done equitably based on health priorities, not on power or prominence.

“Equity is a fundamental principle here,” Dr. Paul Simon said. “We want to make sure all people have access, and that those that are at greatest risk either because of higher risk of exposure, or greater risk of severe illness because of chronic health conditions or other factors have more immediate access to the vaccine.”