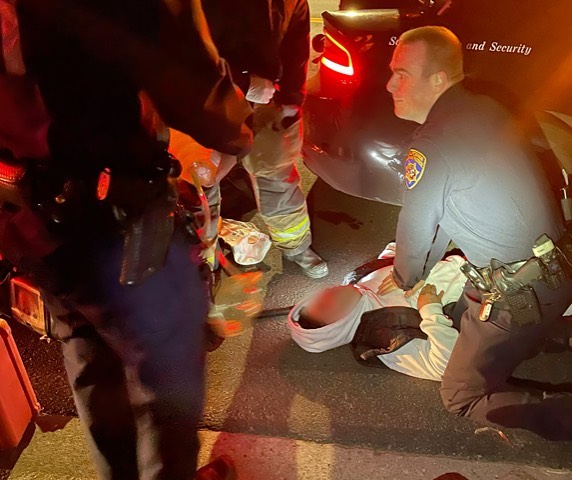 “Our officers’ roles changed from enforcement to guardians in the blink of an eye, ” CHP Officer Matt Napier said.

Juan Balvin of La Puente was arrested about 4 a.m. Sunday on Eighth Street south of Interstate 10 on suspicion of driving under the influence of both drugs and alcohol, Napier said.

Shortly after his arrest, Balvin began complaining about breathing issues, and soon became unresponsive, according to the CHP. After Balvin stopped breathing, officers found he had no pulse and got to work trying to save him.

Paramedics rushed him to San Gorgonio Memorial Hospital in Banning, where hospital staff administered Narcan, a medication designed to rapidly reverse opioid overdose. Balvin then woke up and was later medically cleared to be transported to Smith Correctional Facility in Banning.

When searching Balvin’s vehicle, officers reported finding a bottle containing a substance suspected to be fentanyl, a synthetic opioid that is 50 to 100 times more potent than morphine.

“Thanks to the quick actions of our officers, this man’s life was saved,” Napier said. “Even when faced with an atypical scenario, their life- saving CPR training quickly kicked in and prevented this man from dying on the side of the road.”