With all the uncertainty that has plagued 2020 in relation to high school sports, one thing is certain, these student-athletes want to play, more than anything. Take it from these high school football players:

“I’ve just worked so hard for not only myself and my teammates, and I want to go out there and prove myself and show out.” – Andre Blanco (OL/DL) Senior, Shadow Hills HS

“I think I was really prepared, and then this whole thing happened.” – Cesar Vela (QB) Senior, Rancho Mirage HS

“Not only it’s my senior year, but I’ve been working very hard for it, and if it were not to just happen, that would just break me down.” – Bryant Collins (OT) Senior, Shadow Hills HS

“If I just have five games, me and my team can get some wins and enough film to get some of us recruited to go play at the next level.” – Ty Hershberger (WR) Senior, Rancho Mirage HS

When it comes to getting recruited by colleges, high school football has been hit the hardest by this pandemic. Unlike other high school sports (until recently) there has never been an 11 v 11 club tackle football league to attract college scouts. High school football players have had to gather film on their own, and then send it out to colleges. 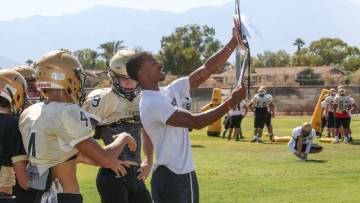 James Dockery, head coach of Xavier College Prep’s football team, explains that without a high school football season, it can limit opportunities for these athletes.

“COVID-19 is really impacting the seniors and last year seniors as well. The football guys and the fall sports, they’re not having an opportunity to participate right now on schedule. You trace that back to the college coaches that are not able to see these guys and girls. They’re not able to come to campus to visit to see them in person. It’s just been really a crazy year and has been very hard for recruiting purposes.”

Junior and seniors are depending on this high school football season to happen if they want to move on to the next level. Even though this season has not been canceled yet, Ty Hershberger, who is a senior wide receiver at Rancho Mirage, explains that California football players are being left behind.

“I feel like it sets us back in a way, because every other state is being able to send out their film, so it’s not giving a bunch of these SoCal athletes a chance to put yourself out there. We just have to send 7 v 7 film or videos of us working out at home or something. Coaches want to see the real thing, coaches want to see kids with pads and hitting.”

Andre Blanco, a senior at Shadow Hills, has tried his hardest to still get recruited, “I’ve tried reaching out to colleges throughout Twitter, and I’ve tried filling out recruitment forms, but I’ve gotten the same response.”

Shadow Hills senior OT/DT, Bryant Collins adds to this, he says that “most coaches, they’ll respond back to me saying, oh, we can’t offer you. It’s getting really hard out here.” Bryant also says that he is considering going to a community college or junior college to continue his football career, and after a couple of years, he can transfer to a 4-year university to play D1 football. Going the JUCO route is a good option for talented athletes who just haven’t had as many looks in high school to go straight to a 4-year university. 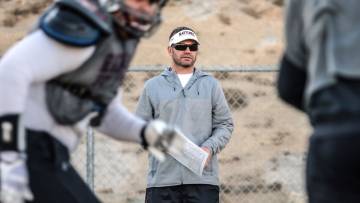 This is pretty heavy to weigh on the minds of young, high school athletes, so their coaches do their best in trying to put a positive spin on the situation. Head coach at Rancho Mirage, L.D. Matthews knows the importance of being realistic, but still have hope. 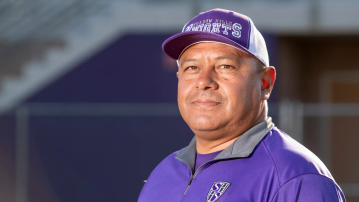 Alex Esquibel, head coach at Shadow Hills is putting safety first and hoping that through this pandemic, these young athletes can learn a great lesson about life.

“There’s a song by Rod Stewart that says, ‘I want to know if you’ve ever seen the rain coming down on a sunny day’ there’s rain, there’s water in the air all the time, but you don’t always see it. The same thing with this virus, it’s gonna be there. Life is about control what you can control and not worry about what you can’t control.”

These athletes and coaches have not given up yet, the grind never stops, football season can still happen this year and every single one of these young men is more than ready for the opportunity to play again. Take it from Cesar Vela, a senior QB at Rancho Mirage:

“I guess it’s like an opportunity, it gives me and my teammates more time to get bigger, faster, and stronger. We’re not going to skip a beat, so we’re going to keep up on it and so if we do, and when we do have a season, we’ll be ready for it.”

Andre also is learning to keep his head up, “I just got to stay positive in the mindset for not only myself and my teammates and keep everybody else’s heads up because we stay working together as a family and we stay prepared to go out there and play.”

Like his teammate, Byant is keeping his hopes alive as well, “Just believe and just trust that there’s gonna be a season.”