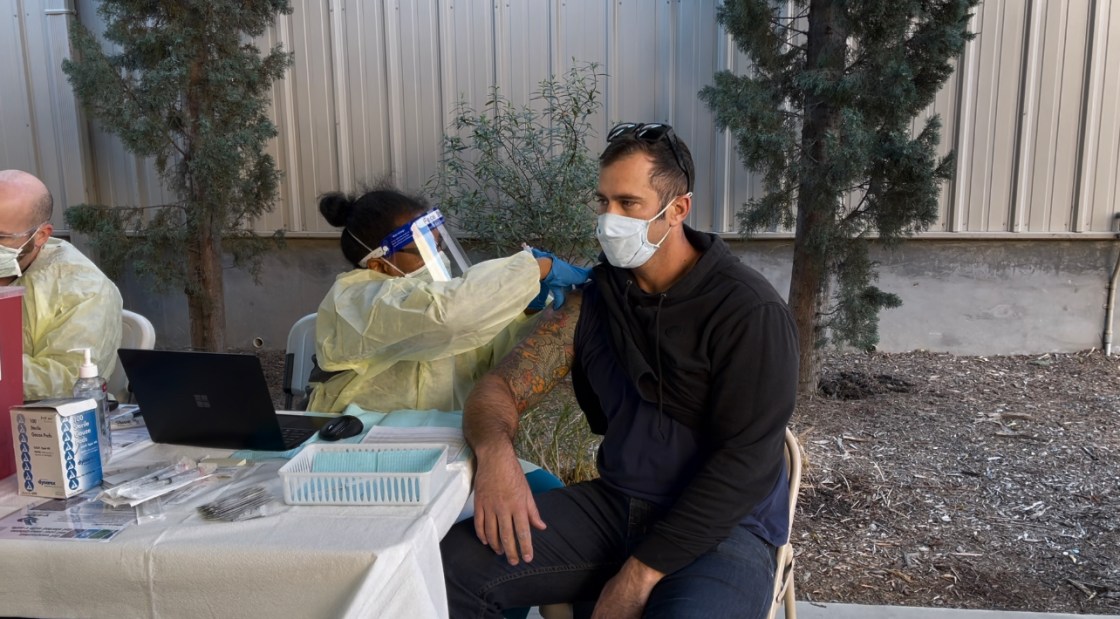 Ninety paramedics and EMTs in Riverside County got their first dose of the Moderna Vaccine on the last day of 2020.

Chief Michael Moore, of the Riverside City Fire Department was wowed as he was first, first responder to get the COVID vaccine in Riverside County, the nurse giving him his first of two doses told him they share the same name.

And Chief Moore was kind of thrilled about that, “Yeah, what’s the odds of that?”

“I see the COVID pandemic from the very early stages of testing patients through patients being treated in the hospital on ventilators and such and so to know that I  have the opportunity to get the vaccine out there and try to push the breaks on this and try to slow this down a little bit feels really good,” says Moore, RN.

“Twenty twenty-one is going to be a new year, I want to set the example for my department … so we just limit the spread and limit the numbers of our members that are being infected by this disease,” says Chief Moore.

Emergency workers weren’t supposed to get the vaccine yet, but as 50 percent of priority health care workers opted out, doses became available.

Moore says this virus has hit the first responder community hard, 40 of his firefighters have been infected and he lost a friend, also in the fire service, to the virus.

“Ken was a 6’2, 6’3 strong individual and it was just horrible just to see what the disease could to and take him down,” says Chief Moore.

The department’s union president Captain Tim Strack says the virus is everywhere, “Off the charts, I‘ve worked through 32 years in the fire service, I‘ve worked through flu seasons, nothing like we’re seeing now, nothing, we’ve got ambulance waits cause we’re not available, I waited 45 minutes on an ambulance call the other day, they just don’t have any available and then you get to the emergency rooms and they’re just lined up on the walls and we have to get back in service and we’ll run another call, still waiting for more ambulances.”

So getting this vaccine is important for him to get protection, but also to show his brother and sisters who are opting out that it’s safe in hopes they reconsider.

“The president of the union and the fire chief are teaming up together to demonstrate that this is safe and to encourage all our firefighter members to get out there and get the vaccine now that it’s available,” says Strack.

Captain Matt Mathis says his family is expecting a new baby girl, so for him this vaccine is priceless, “There have been members whose spouses were pregnant and they’ve had complications and I just don’t want to be one of those people, it’s too much of a risk on the family to take a chance of bringing that home.”

Palm Springs Fire Department engineer / paramedic says he will sleep a little better at night knowing he can not just protect himself but his family, “It’s going to be a huge weight of my shoulders to finally have some protection in the vaccination so that way I can go do my job and not worry about bring anything home.”