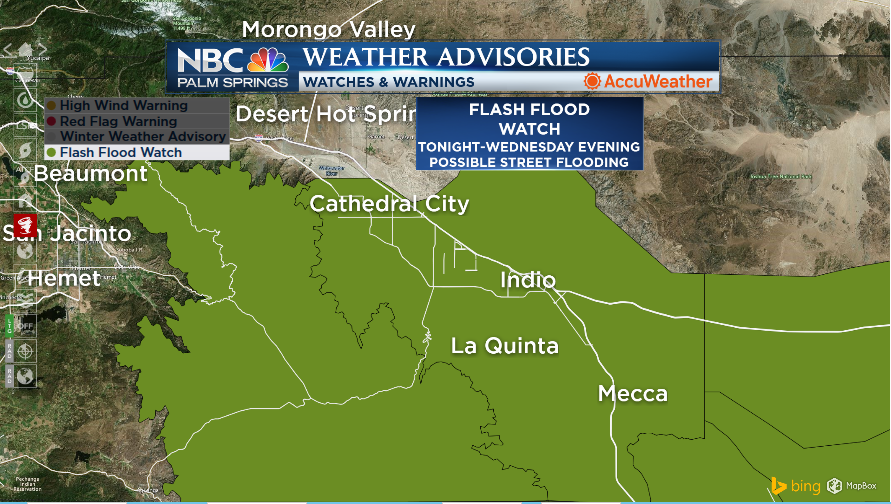 RIVERSIDE (CNS) – The slashing winds predicted Tuesday and Wednesday throughout Riverside County will be accompanied by rainfall in parts of the Coachella Valley, as a trough of low pressure off the Mexican coast spills into Southern California.

“Typically strong (Santa Ana) winds are drying, but in this case, we are seeing moisture moving in from the south,” according to the National Weather Service. “Our latest thinking on precipitation is … in the Coachella Valley, .25-.50 inches. Eastern Riverside and San  Bernardino County mountains (could have) snowfall of 2-4 inches above 5,500 feet.”

A flash flood watch is in effect from midnight Tuesday evening to late Wednesday night for the entire Coachella Valley.

“The showers will be heaviest Wednesday afternoon,” according to an NWS statement. “There is even a slight chance of thunderstorms.”

The agency cautioned that “dry river beds and culverts could see sudden water rises” and advised motorists to be extra careful.

The upper level low pressure system will scoot to the northeast by Thursday morning, followed by a general clearing throughout the region. However, another winter storm is forecast to arrive early Saturday.

Temperatures are returning to seasonal norms over the next few days, with highs in the Riverside metropolitan area hovering around 70 until Friday, when the mercury will only reach about 63 degrees, according to the Weather Service. Lows will be in the mid 40s.

The temperature band will be virtually identical in the Coachella Valley, while the Temecula Valley may not peak above 60 degrees Friday.

A red flag warning is in effect through 10 p.m. Tuesday for the Inland Empire, and a high wind watch is in effect in western Riverside County until 10 p.m. Wednesday.

Some areas could experience winds of 25 to 35 mph, with gusts up to 60 mph in the mountains, 55 mph in the valleys and 40 mph in the Coachella Valley. Humidity levels will hover around 15%, meteorologists said.

The NWS warned that the strong winds could make travel difficult for high-profile vehicles and blow down trees and power lines, potentially causing widespread power outages.

The high winds may prompt Southern California Edison to issue Public Safety Power Shutoffs, during which electricity is turned off for customers in wind-prone areas to lessen the likelihood of fires in the event power lines drop.

A map of SCE’s PSPS activity is available at http://www.sce.com/wildfire/psps.