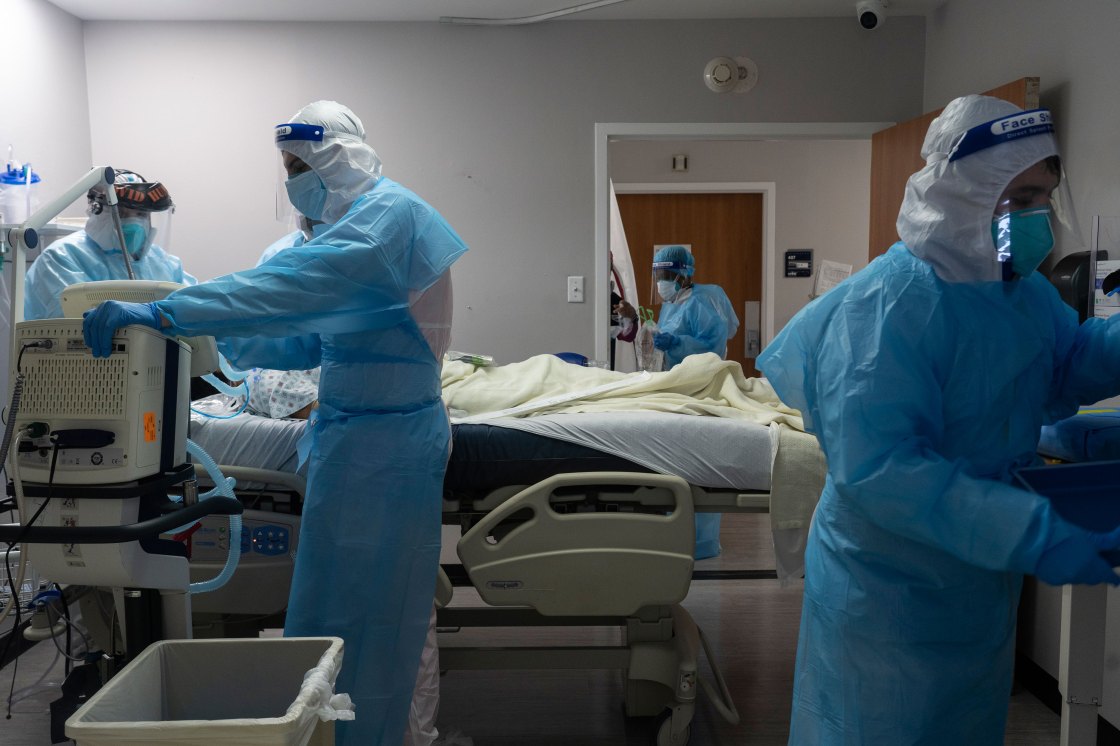 Hospitals throughout Riverside County are seeing their COVID-19 and other patient counts decline, but intensive care units remain maxed out, and some facilities continue to rely on outside assistance to maintain operations, Riverside University Health System officials told the Board of Supervisors Tuesday.

“We are doing better. However, in the context of where we are normally this time of year, things are still at a very high level,” Emergency Management Department Director Bruce Barton said. “About 83% of total licensed (hospital) bed capacity is taken up.”

Barton said six acute care facilities are operating above 100% capacity and continue to utilize “surge plans” to expand critical care space wherever possible. At the Riverside University Medical Center in Moreno Valley, that has meant opening storage rooms for patient care, and at Riverside Community Hospital, it led to the opening of a former cafeteria.

At this point, if numbers continue to trend down, the county’s peak in coronavirus hospitalizations will have been Jan. 10, when 1,675 people suffering virus-related complications were undergoing treatment. The number is now closer to 1,300, according to Barton.

He said roughly 330 COVID-19 patients are receiving ICU care, and those combined with influenza and other patients, have kept the units completely full.

The county is technically at 0% ICU availability — the same as the 11- county Southern California region defined by Gov. Gavin Newsom’s Dec. 6 stay-at-home order, which temporarily superseded his Blueprint for a Safer Economy framework.

Newsom declared that the blanket restrictions tied to the order, which forced some businesses to close again, were necessary to conserve hospital space. He used a 15% ICU availability threshold as the key metric in determining when the order should be lifted. Despite the ongoing ICU limitations, he rescinded the order Monday, saying California Department of Public Health projections indicated current trends assure a steady drop in ICU admissions.

Supervisor Jeff Hewitt, who has regularly cast doubt on the state’s rationale for imposing different sets of restrictions, questioned the governor’s reasoning.

According to county Department of Public Health Director Kim Saruwatari, the CDPH has estimated that overall regional ICU availability should recover to just over 30% in the next four weeks.

Barton told the board that other trends are moving in a positive direction, including ambulance deliveries, or wait times at hospitals. Last month, the EMD director said drop-offs were extended because emergency rooms were crammed with people, forcing ambulances to idle for up to an hour with patients waiting to be admitted.

“Emergency services volume is continuing to come down. The wait times have been getting better over the last couple of weeks,” Barton said. “But it’s still a little over what we would see in a traditional flu season.”

According to Barton, the Moreno Valley hospital and others in the western and eastern halves of the county have benefited significantly from “supplemental staffing,” with U.S. military and state-supplied health care professionals deployed in various positions.

“There are about 300 across all hospitals,” he told the board, adding that they’re needed because of the ongoing “operational impacts still being felt throughout the (local) medical system.”

Hewitt, along with Supervisors Karen Spiegel and Kevin Jeffries, wondered about progress in skilled nursing facilities and other long-term care homes making SARS-Cov-2 vaccinations available to residents, whose exposure to the virus carries the highest risk.

Barton said the RUHS team was working to provide immunizations as expeditiously as possible.

“I would like to see us move toward administering the limited number of doses to the most vulnerable,” Hewitt said.

According to Saruwatari, about 102,000 vaccine doses have been dispensed countywide in the current qualifying categories, which include first responders, hospital workers and seniors over 65.