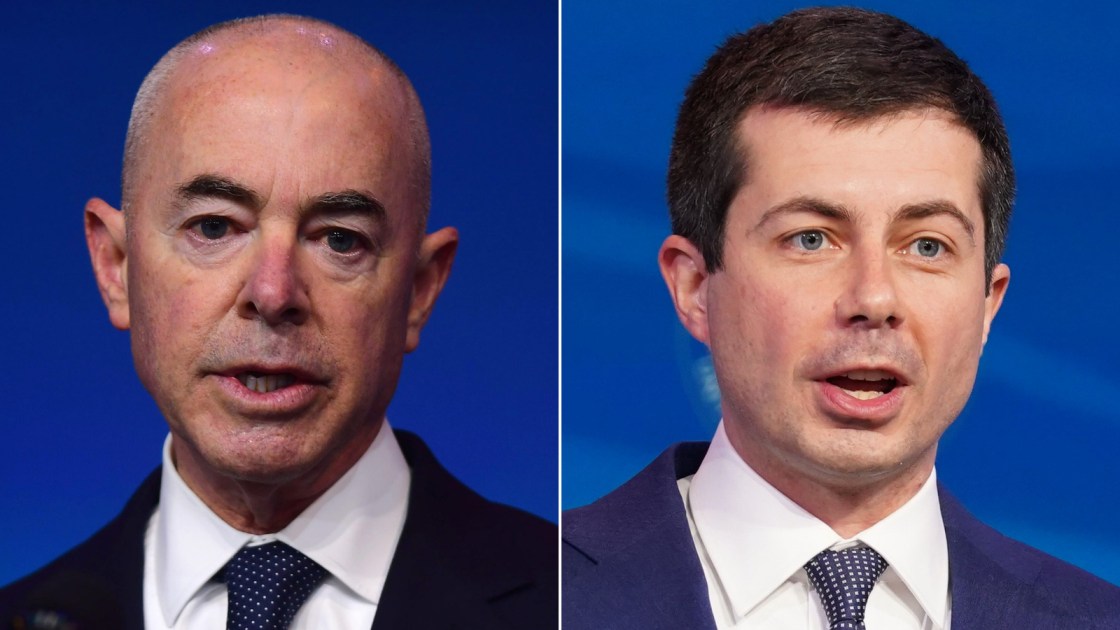 The Senate voted Tuesday to confirm Alejandro Mayorkas as Homeland Security secretary, the first Latino and immigrant to serve at the helm of the department.

His confirmation will fill a critical role in the new administration and he’ll be expected to swiftly begin rolling back Trump administration immigration policies while juggling the response to a global pandemic and national security threats, along with restoring a department that’s been rattled by leadership turnover and vacancies in recent years.

The choice vaults a candidate President Joe Biden spoke glowingly of after the primary into a top job in his administration and could earn Buttigieg what many Democrats believe is needed experience should he run for president again.

The role of transportation secretary is expected to play a central role in Biden’s push for a bipartisan infrastructure package.

Before Tuesday, just four of Biden’s 23 Cabinet-level nominees requiring Senate approval had so far been confirmed: Antony Blinken as secretary of state, Janet Yellen as treasury secretary, Lloyd Austin as secretary of defense and Avril Haines as national intelligence director.

Senate Majority Leader Chuck Schumer had pushed to have Mayorkas confirmed swiftly, but Republicans argued that the nominee hasn’t been properly vetted on immigration issues and called for an additional hearing on his nomination, delaying efforts to quickly install a critical leader of the country’s national security apparatus.

Under former President Barack Obama, Mayorkas served as both the Homeland Security deputy secretary and the director of the US Citizenship and Immigration Services, an immigration agency within the department.

Republican pushback to his nomination sparked criticism from Democrats, with some calling it indefensible. The resistance come as as the Department of Homeland Security grapples with the coronavirus pandemic, national security concerns and immigration.

Last week, DHS issued a threat bulletin due to the ongoing potential for violence in the wake of the presidential inauguration, including concerns that domestic extremists may be emboldened by the US Capitol attack earlier this month.

The department has been without a Senate-confirmed leader since Homeland Security Secretary Kirstjen Nielsen was ousted in spring 2019.

Several Republican senators did, however, cross party lines to vote with Democrats in support of breaking the filibuster of the nomination, including Sens. Mitt Romney of Utah, Susan Collins of Maine, Lisa Murkowski of Alaska, Rob Portman of Ohio and Shelley Moore Capito of West Virginia.

The use of the filibuster — to stall nominations or legislation — has long been a favored tool of the minority party, something Democrats did often when trying to derail and delay the Republican agenda under then-President Donald Trump.

While several of Biden’s nominees have been confirmed and have moved at a slower pace than some of his predecessors’ Cabinet picks, Republicans had not yet threatened to filibuster a nominee until Wednesday. Mayorkas is now the first.

The Senate Homeland Security Committee advanced Mayorkas’ nomination to the floor and held a hearing examining the nominee’s qualifications to lead the department.

“The Committee on the Judiciary has jurisdiction over matters relating to immigration and nationality … For this reason, all members of the committee should have the opportunity to hear from Mr. Mayorkas directly, and to publicly discuss with him his plans with respect to the Department’s immigration components and functions,” a letter from the senators said making their request.

Democratic Sen. Dick Durbin of Illinois, who is set to chair the Judiciary Committee, told CNN of the hearing request, “I don’t see why that’s necessary” and called it “totally political.”

“This is indefensible,” Durbin said. “We are withholding the leadership of the Department of Homeland Security.”