Doug Evans lives in Cathedral City and is unhappy with the short-term vacation rentals in his neighborhood.

He plans to vote yes on measure B in March to phase out short-term rentals in non-HOA communities.

Together, Doug and other community members make up the “Cathedral City residents Yes on B” group that is campaigning for the special election.

“We’re residents that live here, we talk to our neighbors, they talk to their neighbors and what we’re doing is a very modest campaign,” said Evans.

But advocates for No on Measure B say the other side is misleading. 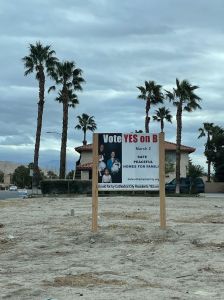 They point to a sign with a police officer and his family as an example.

The detective in the photo actually works in New Mexico and tells NBC Palm Springs he didn’t give permission for the group to use his image.

He also says his department’s legal teams will be contacting the Yes on B group to have them remove the signs.

“It’s kind of shady that they stole a photo that was a copyrighted photo from a White House photographer and just allude to the fact that the police supported measure B,” said Karyn McQueen, an advocate for no on measure B.

In fact, the Cathedral City Police Officer’s Association hasn’t endorsed a specific side on this issue, which the Yes on B group says they are aware of.

The believe the image represents safety.

“The image they’re complaining about is a stock photo. We have reached out to the Cathedral City Police Officer’s Association. They have chosen to stay on the sidelines because they typically don’t get involved in ballot measures,” said Evans.

Both the city council and Yes on B group have also said that phasing out short-term rentals will create more affordable housing, but Karyn says that doesn’t apply to all 200 short-term vacation rentals.

As the back and forth continues, the fate of short-term rentals in Cathedral City now rests in the voter’s hands.

The vote takes place March 2nd. Ballots have already been mailed out.