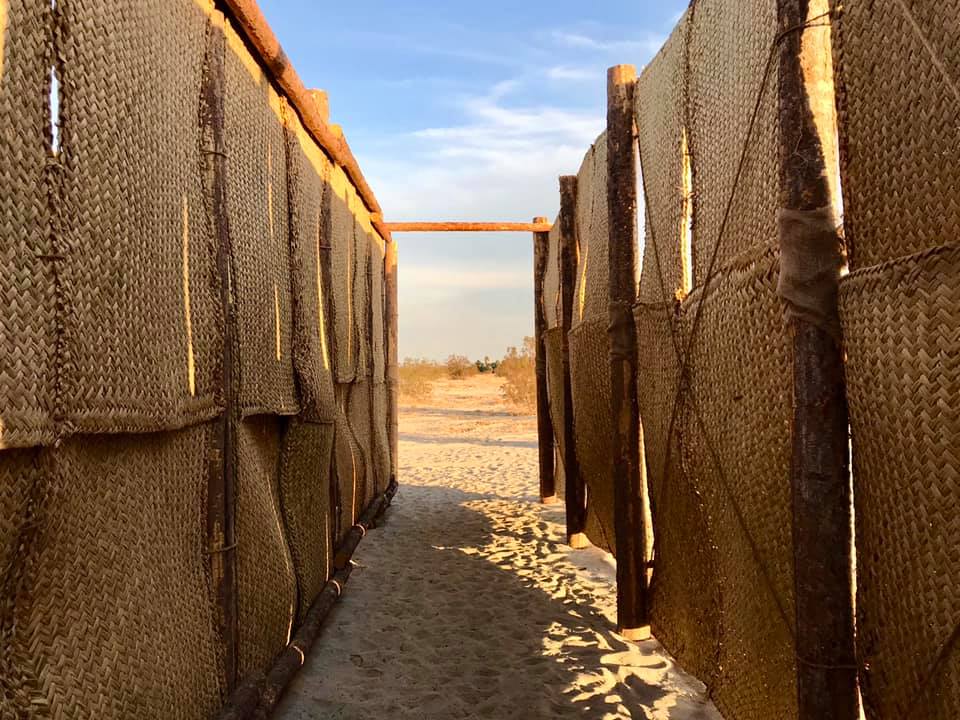 The 2021 Desert X outdoor art exhibition officially got underway Friday in the Coachella Valley, and some installations were attracting significant attention.

Thirteen artists from eight countries, including Egypt, Argentina and Saudi Arabia, will deploy their site-specific artwork at outside areas across 40 miles of the Colorado Desert. The art biennial will run until May 16.

Organizers have billed the 2021 Desert X exhibition, briefly delayed due to the coronavirus pandemic, as among the first regional art events since the global health crisis began this time last year. This year’s version — the third since kicking off in 2017 — has nudged various social and environmental justice themes into the forefront.

One piece, titled “Never Forget,” spells out the words “Indian Land” using large lettering similar to the famous Hollywood sign. It was crafted by native Alaskan multi-disciplinary artist Nicholas Galanin to highlight the history of colonization and displacement of Indigenous people, according to his website. The piece generated a buzz on social media, spurring visitors to flock to the area of Highway 111 and Tramview Road to see it before the official start of the exhibition.

The lettering is displayed atop the traditional land of the Cahuilla people, who have called the Coachella Valley home for some 5,000 years, according to the Agua Caliente Band of Cahuilla Indians.

On its website, Desert X calls the Cahuilla people “the original stewards of the land on which Desert X takes place.”

“We pay our respect to the Cahuilla People, past, present and emerging, who have been here since time immemorial,” the Desert X website reads.

Desert X was originally slated for Feb. 6 to April 11, but organizers postponed the event due to Gov. Gavin Newsom’s regional stay-at-home orders, which were lifted late last month.

The event was slated to go on without a live “smoke sculpture” aimed at celebrating the 50th anniversary of the Living Desert Zoo and Gardens in Palm Desert, but organizers signaled Friday morning they were still planning to include the work, just at a different location.

Judy Chicago’s “Living Smoke: A Tribute to the Living Desert” planned to shoot non-toxic colored smoke into the air on April 9 to highlight the natural beauty of the 1,200-acre zoo property. But the zoo nixed the installation due to environmental concerns.

Desert X spokesperson Lyn Winter said Friday morning a new site for the sculpture “is being identified,” but did not provide additional information.

Chicago, a self-described feminist artist, crafts “smoke pieces aimed at momentarily transforming and feminizing the landscape without leaving a mark or trace,” according to Desert X.

Artistic Director Neville Wakefield returned to the helm of Desert X for the 2021 installation, along with a new co-curator, Cesar Garcia-Alvarez, executive and artistic director of The Mistake Room, a nonprofit art space in Los Angeles.

Garcia-Alvarez has curated a wide range of notable exhibitions and projects in the United States and abroad and was the U.S. commissioner of the 13th International Cairo Biennial in Egypt from 2012-2013.

Garcia-Alvarez previously pledged to work closely with local artists and residents in his work at Desert X.

A map with the exact locations of all the installations is available on the Desert X 2021 app and at www.desertx.org.