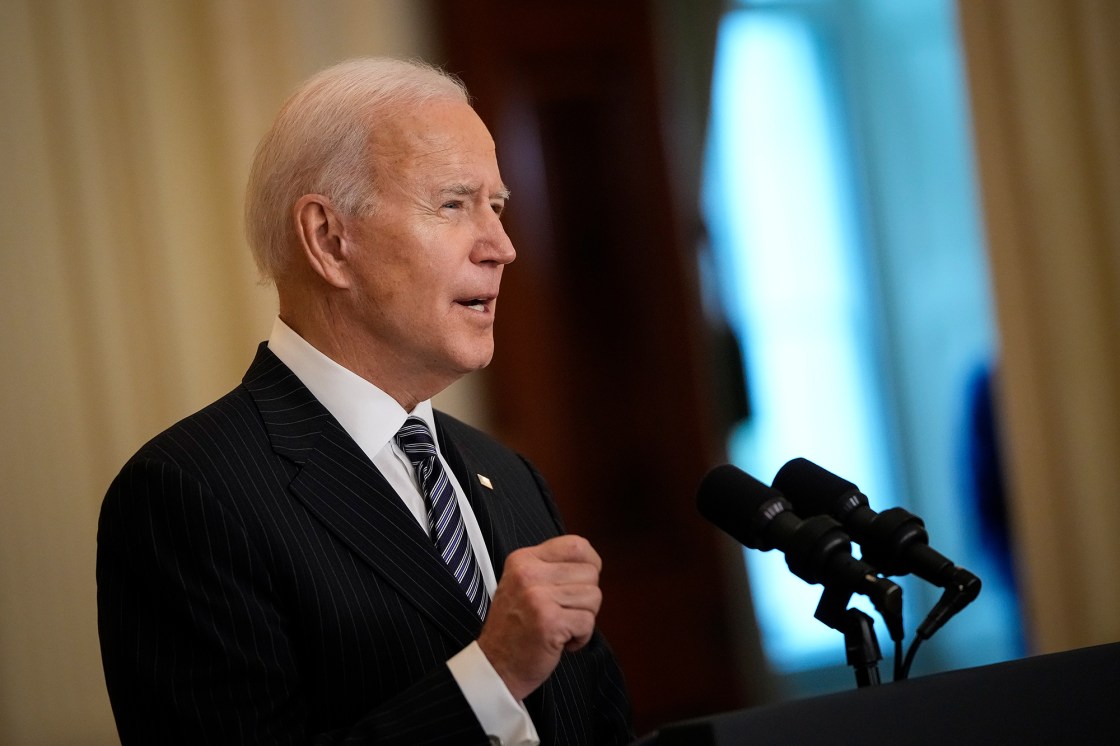 President Joe Biden on Tuesday used the latest mass shooting to offer his most vocal push for gun control since taking office, saying the deaths of 10 people at a grocery store in Colorado should jolt Washington and the nation into action.

It was a message past presidents have also wielded to disappointing results. But Biden — who has a lengthy and mixed record on the issue — signaled he was ready to press for legislation even as he balances other priorities in Congress.

In somber remarks from the White House State Dining Room, he said he would do everything in his power to keep Americans safe and pushed a pair of House-passed gun reforms, including a universal background checks measure and an assault weapons ban.

After acknowledging there were still outstanding details to be learned about Monday’s massacre, including the shooter’s motive and weapons, Biden insisted enough was known to make an ardent call for new gun control.

“I don’t need to wait another minute, let alone an hour, to take common sense steps that will save lives in the future,” he said, listing a ban on assault weapons and high-capacity magazines, as well as strengthening the background check system by closing loopholes, as areas he would like to see Congress act.

“This is not — it should not be — a partisan issue. This is an American issue,” he said. “It will save lives, American lives. We have to act.”

Yet the complications in pushing for gun control at a moment when a number of other legislative priorities are looming was immediately apparent. Biden departed the White House directly following his remarks for a visit to Ohio, where he is promoting the $1.9 trillion stimulus measure passed earlier this month. Aides are also preparing an infrastructure package that is expected to be unveiled soon.

Biden noted on Tuesday that the White House flag was still flying a half-staff to honor the victims of last week’s shooting in Atlanta when the Colorado incident occurred. He ordered it lowered again.

The President had made no mention of gun control in the aftermath of the Atlanta shooting — including during remarks after visiting the city — choosing to focus instead on a recent spate of violent crimes committed against Asian-Americans.

But he faced increasing pressure to voice an opinion on the matter after another mass killing in Colorado.

Earlier Tuesday, Vice President Kamala Harris called the shooting “absolutely tragic,” but ignored a question about the future of gun control during a swearing-in ceremony for William Burns as CIA director.

As the nation’s posture on guns has evolved, Biden has been front-and-center at most every stop along the way for more than three decades, from the triumph of a 10-year ban on assault weapons in 1994 to the disappointment of a failed push for universal background checks in the wake of the Sandy Hook massacre.

But now Biden commands a bully pulpit that he’s never had in the debate over guns in America, facing the challenge of how — or whether — to wield the power of the White House to try and make some type of gun reform legislation a reality.

The shootings in Georgia and Colorado come in the first chapter of his presidency, prompting a discussion inside the West Wing over how much political capital Biden should expend on the matter, which has so often ended in frustration. But the debate comes at a time when the powerful gun lobby is divided and weakened, creating what some allies see as a possible opening for Biden.

“Nothing frustrated President Obama more than his failure to achieve gun reform, but Biden may have the chance to do something Obama just couldn’t do,” a top aide to Obama told CNN, speaking on condition of anonymity to talk candidly about Obama’s limitations on the matter. “Biden is not seen as threatening to some people in a way Obama sadly was.”

It’s an open question the degree to which Biden wants a debate over guns to consume the political oxygen in his first year, with Covid-19 relief only beginning to take hold and a massive infrastructure bill next up on the agenda. Yet with two mass shootings in the last week alone, aides know it may be a choice already made for Biden.

The President’s team has met with gun control advocates over the past two months to discuss potential executive actions and to generate ideas on potential paths forward, according to people familiar with the meetings. Those meetings have been led by Susan Rice, director of the Domestic Policy Council and Cedric Richmond, a senior adviser to Biden and director of the White House Office of Public Engagement.

Richmond, speaking on MSNBC on Tuesday morning, said: “The regular sentiment of hearts and prayers are not enough.”

“We need action on this in the country,” he said, pointing to recently passed legislation in the House. “This President has a track record of fighting against the NRA and beating them, and we need to make sure that we have sensible gun regulations in this country to ensure safety. And so we need action, not just words and prayers.”

Among the executive actions Biden could advance include requiring background checks on “ghost guns” that don’t have serial numbers or strengthening the federal background check system to alert law enforcement agencies when someone fails a check. Biden has also said he will task the attorney general with better enforcement of existing gun laws. And advocates have raised the idea of sending more federal money to communities afflicted by gun violence.

But some advocates walked away from meetings at the White House without a clear picture of the timeline for unveiling any gun control steps or a legislative plan for advancing gun control measures in an evenly split Congress. It wasn’t clear from the meetings whether Biden would support doing away with the filibuster for gun control legislation.

During his private meeting with Asian community leaders in Atlanta last week, the issue of gun control did arise briefly when one of the participants spoke about a background check bill that was being introduced in the Georgia Legislature, according to a person familiar with the meeting. Biden voiced his support for expanding background checks but did not offer a timeline and later, during public remarks at Emory University, made no mention of gun control.

Ultimately, gun control issues — which face an uphill battle for passage in a Senate narrowly controlled by Democrats — are further down on Biden’s list of legislative priorities than issues such as infrastructure and immigration.

As a candidate, Biden said on his first day in office he would send a bill to Congress repealing liability protection for gun manufacturers and close background check loopholes, actions he has yet to take seven weeks into office.

“It remains a commitment, a personal commitment of the President’s, to do more on gun safety, to put more measures in place, to use the power of the presidency, to work with Congress. And certainly there’s an important role for the attorney general and the Justice Department to play in this regard,” White House press secretary Jen Psaki said last Thursday. “Unfortunately, don’t have any updates for you today, but it is an issue he remains committed to.”

The Senate Judiciary Committee is scheduled to hold a hearing Tuesday on the future of gun control in the Senate. Two House-passed bills tackled who can buy a gun and how to close loopholes on background checks but the votes are not there in the 50-50 Senate to pass the House bills, or an assault weapons ban or a limit on magazines. Despite this, Schumer has pledged to bring the House’s universal background check bill to the floor.

The sticking point between Republicans and Democrats on background checks is on if there should be exceptions and if so, who they should apply to. Most lawmakers agree that if you are going to go and buy a gun from a licensed firearm dealer or at a gun show, you should have a background check. What they don’t agree on is whether when you sell a gun to a family member or friend or privately transfer a gun, do you have to run a background check?

That’s why the 2013 bipartisan deal struck by Sens. Joe Manchin, D-West Virginia, and Pat Toomey, R-Pennsylvania, was a significant agreement. It struck a compromise and would have required background checks on all commercial sales of guns. But it failed in 2013 and is not the legislation that Democrats are currently looking at bringing up for a vote.