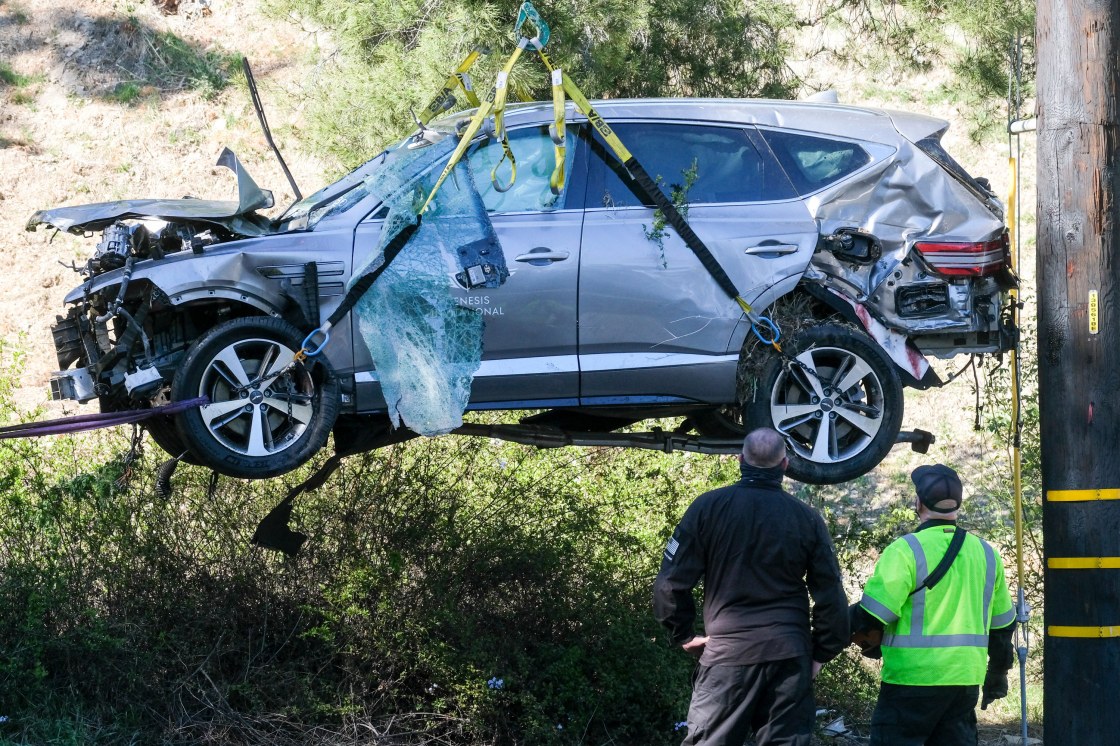 Speed was the primary cause of the February crash in Rancho Palos Verdes that seriously injured Tiger Woods, sheriff’s officials said Wednesday, saying the golfer was driving between 84 and 87 mph — nearly double the posted speed limit — when he struck a median.

“The primary causal factor for this traffic collision was driving at a speed unsafe for the road conditions and the inability to negotiate the curve of the roadway,” Sheriff Alex Villanueva said at a news conference Wednesday morning at the Hall of Justice in downtown Los Angeles.

Villanueva said the Genesis GV80 that Woods was driving was traveling at 84-87 mph when it crashed at 7:12 a.m. Feb. 23 into the center median on northbound Hawthorne Boulevard at Blackhorse Road. The posted speed limit is 45 mph.

The SUV careened across the southbound lanes, and was still moving at about 75 mph when it sheered off a tree on the side of Hawthorne Boulevard and flipped over before coming to rest on its side about 30 yards off the side of the road, Villanueva said.

Villanueva repeatedly insisted during the news conference that Woods did not receive preferential treatment in the investigation, saying there was no probable cause for investigators to obtain warrants for Woods’ cell phone records or bloodwork to determine if he was distracted or impaired at the time.

Villanueva said there was no blood drawn from Woods because “there was no sign of impairment.”

“Without the signs of impairment, we don’t get to the point where we can actually author a search warrant and develop the probable cause to get that,” Villanueva said.

Sheriff’s Capt. James Powers of the Lomita Station, also at the news conference, restated that “there was no evidence of any impairment.”

“Due to his injuries, and the traumatic nature of his injuries, it would not be appropriate to do any type of field sobriety test,” Powers said.

“There was no evidence of braking throughout this collision,” Powers said. “It is speculated and believed that Tiger Woods inadvertently hit the accelerator instead of the brake pedal … .”

Despite concluding that Woods was traveling in excess of 80 mph, no citations were issued. Powers said there was no basis for a citation because Woods was not actually seen speeding by a peace officer or an eyewitness. Absent such a direct witness, any citation would likely be dismissed in court, he said.

Shortly after the sheriff’s department release of information about the cause of the crash, Woods issued a statement, although it did not address the conclusion that he was speeding.

“In the last few days, I received word from the Los Angeles County Sheriff’s Department that their investigation regarding my traffic accident back on February 23rd in Los Angeles has been completed and closed,” Woods said. “I am so grateful to both of the good Samaritans who came to assist me and called 911. I am also thankful to the LASD deputies and LA firefighter/paramedics, especially L.A. sheriff’s Deputy Carlos Gonzalez and LAFD Engine Co #106 fire paramedics Smith and Gimenez, for helping me so expertly at the scene and getting me safely to the hospital. I will continue to focus on my recovery and family, and thank everyone for the overwhelming support and encouragement I’ve received throughout this very difficult time.”

Last week, Villanueva announced the investigation had been completed, but that details were being withheld due to privacy issues. The sheriff said Wednesday that Woods and his representatives had given permission to reveal details of the investigation that otherwise would have remained confidential — only known to the investigators and the involved parties.

Woods, 45, was taken to Harbor-UCLA Medical Center after the crash and underwent surgery for multiple fractures to his right leg and ankle. He was later transferred to Cedars-Sinai Medical Center for follow-up work. He announced March 16 that he had been released from the hospital and returned to his home in Florida.

No further information about his medical recovery has been released, and it was unclear if or when Woods might be able to return to the golf course.

Woods lives in Florida but was in the Southland at the time of the crash after hosting the Genesis Invitational golf tournament at The Riviera Country Club.