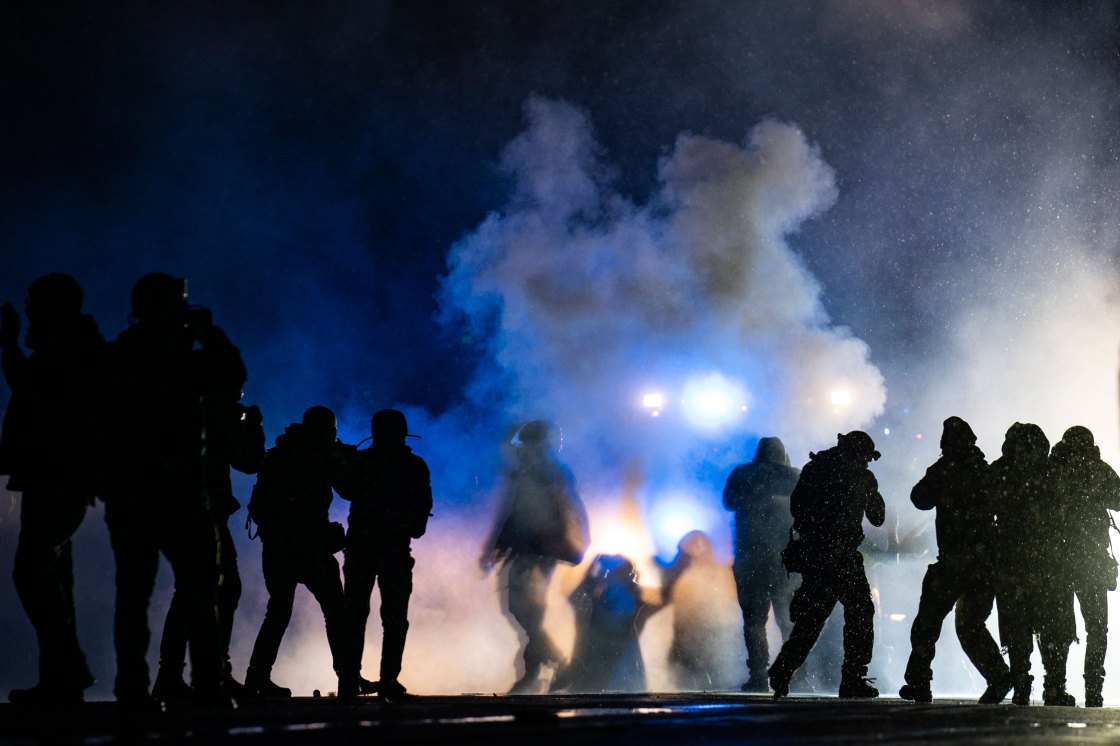 A police officer who shot and killed a Black man in a Minneapolis suburb after a traffic stop has been arrested and charged with second-degree manslaughter in the case, authorities said Wednesday.

Potter was arrested late Wednesday morning by agents with the Minnesota Bureau of Criminal Apprehension, the bureau said. She was booked into the Hennepin County Jail, online records show.

Agents with the Minnesota Bureau of Criminal Apprehension (BCA) this morning arrested a former a Brooklyn Center police officer for the April 11 shooting death of Daunte Wright. Agents took Kim Potter into custody at approximately 11:30 a.m. at the BCA in St. Paul.

In Minnesota, second-degree manslaughter applies when authorities allege a person causes someone’s death by “culpable negligence whereby the person creates an unreasonable risk, and consciously takes chances of causing death or great bodily harm to another.”

Someone convicted of this charge would face a sentence of up to 10 years in prison and/or a fine of up to $20,000. CNN has sought comment from Potter’s attorney, Earl Gray.

Then-Police Chief Tim Gannon said Wright’s death Sunday in Brooklyn Center appeared to be the result of Potter mistaking her gun for her Taser as Wright resisted arrest. However, the Minnesota Bureau of Criminal Apprehension examined Potter’s duty belt and found her handgun is holstered on the right side of her belt, while the Taser is on the left side, according to a news release from Orput’s office.

Citing a criminal complaint, the release said the Taser is yellow with a black grip and is set in a straight-draw position, “meaning Potter would have to use her left hand to pull the Taser out of its holster.”

Wright’s death has roiled a metropolitan area scarred by other police-involved deaths and reignited national conversations about policing and the use of force.

Protests, some violent, have taken place each night in and around Brooklyn Center. Wright’s family had called for charges against the officer. More than 3,000 Minnesota National Guard members have now been activated in the Twin Cities area, according to a tweet from Operation Safety Net (OSN) Wednesday afternoon.

You may see military vehicles and Guardsmen in your neighborhood. The @MNNationalGuard has activated just over 3000 service members in support of Operation Safety Net this week. pic.twitter.com/zPbvH2SNvA

Reacting to the manslaughter charge, one of the Wright family’s attorneys, Benjamin Crump, released a statement saying “while we appreciate that the district attorney is pursuing justice for Daunte, no conviction can give the Wright family their loved one back.”

“This (shooting) was no accident. This was an intentional, deliberate and unlawful use of force,” Crump’s statement reads.

“Driving while Black continues to result in a death sentence. A 26-year veteran of the force knows the difference between a Taser and a firearm,” Crump wrote. He added that the Wright family would hold a news conference Thursday afternoon.

Developments in the investigation have unfolded daily, including the release of body camera footage and Gannon’s statement that the shooting appeared accidental on Monday, and the resignations of Potter and Gannon on Tuesday.

Though Potter has submitted a resignation letter, Mayor Mike Elliott said Tuesday he has not accepted it, adding “we’re doing our internal process to make sure that we are being accountable to the steps that we need to take.” Earlier, he told CBS he thought Potter should be fired.

Sunday’s killing of Wright is at least the third high-profile death of a Black man during a police encounter in the Minneapolis area in the past five years, after the shooting of Philando Castile in Falcon Heights in 2016 and the death of George Floyd last year. Minneapolis police also were under scrutiny when an officer was convicted of third-degree murder and manslaughter for the 2017 fatal shooting of Justine Ruszczyk, a White woman.

Gray, Potter’s attorney, also is the attorney for Thomas Lane, one of four officers involved in Floyd’s death, and one of the defense attorneys for Jeronimo Yanez, the former police officer who was found not guilty in Castile’s death.

Police and protesters clash in third night of demonstrations

Tuesday’s demonstrations in Brooklyn Center began peacefully, but chaos erupted around the city’s police station by evening. Officers used pepper spray and fired flash bombs at protesters, who hurled water bottles and other projectiles at officers in riot gear.

The unified law enforcement command in Brooklyn Center made “upwards of 60 arrests” Tuesday night, many of which were for “riot and other criminal behaviors,” Col. Matt Langer, chief of the Minnesota State Patrol, said.

Protesters Tuesday were seen scaling a fence outside the FBI office, holding a banner reading, “Justice for Daunte Wright.” Members of the National Guard were in Brooklyn Center, Minneapolis and St. Paul.

By the time the city’s 10 p.m. curfew started, hundreds of protesters had dwindled to a few dozen. With officers and police vehicles forming a line across front yards and the street blocking the police precinct, those remaining draped themselves in blankets and lit a small garbage fire in the falling snow.

On the street where protesters were once shoulder to shoulder, the few remaining chanted: “Say his name: Daunte Wright,” and “I smell bacon, fry the pig.”

Speaking at a late-night news conference, Hennepin County Sheriff David Hutchinson said there was recognition of the pain suffered in the community on Sunday night.

Two families come together in tragedy

Floyd’s family left the courthouse during Chauvin’s trial Tuesday “because they thought it was important that they give comfort to Daunte Wright’s mother” and family, Crump said Tuesday at a news conference with the two families.

“We will stand in support with you. … The world is traumatized, watching another African American man being slayed,” said Philonise Floyd, brother of George Floyd. “I woke up in the morning with this on my mind. I don’t want to see another victim.”

The losses of both Wright and Floyd were acknowledged in Tuesday’s protests. Demonstrators knelt for 9 minutes and 29 seconds, to symbolize the amount of time authorities say Chauvin knelt on Floyd’s neck.

And just as the Floyd family did last year, the Wright family is looking for more answers surrounding their loved one’s death.

One of the family’s attorneys, Jeffrey Storms, told CNN that Gannon’s explanation — that the shooting appeared to be an accident — “is by no means proper or enough.”

“I can’t accept that — a mistake. That doesn’t even sound right,” he told ABC’s “Good Morning America.” He cited the officer’s length of service — authorities said she’d been with Brooklyn Center police for 26 years.

Wright’s mother, Katie Wright, said she wanted to see the officer “held accountable for everything that she’s taken from us.”

“It should have never, ever escalated the way it did,” Katie Wright told ABC.

What happened in traffic stop that ended Wright’s life

Wright was with his girlfriend Sunday afternoon, driving to the house of his older brother, Damik Bryant.

Officers pulled him over in Brooklyn Center for an expired tag and learned he had an outstanding warrant, police said. The warrant was for a gross misdemeanor weapons charge, according to the news release from Orput’s office.

Wright gave officers his name before calling his mother, Bryant said. His mother, Katie Wright, told reporters that Daunte Wright called her, and she heard a police officer ask him to put down his phone and get out of the car.

Daunte told her he’d explain why he was pulled over after he exited, she said. She eventually heard police ask him to hang up, and then scuffling, before the call ended, she said.

Body camera footage released Monday shows Wright standing outside his vehicle with his arms behind his back and an officer directly behind him, trying to handcuff him. An officer tells Wright “don’t,” before Wright twists away and gets back into the driver’s seat of the car.

Orput’s office said Potter “pulled her Glock 9mm handgun with her right hand and pointed it at Wright.”

The officer whose camera footage was released is heard warning the man she’s going to use her Taser on him, before repeatedly shouting, “Taser! Taser! Taser!” It’s at this point that Orput’s office says Potter “pulled the trigger on her handgun” and fired one round into the left side of Wright.

“Wright immediately said, “ah, he shot me,” and the car sped away for a short distance before crashing into another vehicle and stopping,” the release said.

Then, the officer is heard screaming, “Holy sh*t! I just shot him.”

An ambulance was called and Wright was pronounced dead at the scene, Orput’s release states.

Gannon said the portion of body-worn camera footage released Monday led him to believe the shooting was accidental and that the officer’s actions before the shooting were consistent with the department’s training on Tasers.