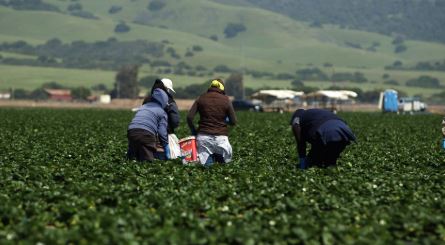 Vidal Mendoza has been a is getting ready for the bell pepper, corn and green bean season, in between harvesting those crops he does landscaping work.

He says working in the fields is tough work but doing it during a pandemic is scary, “Lots of people worked sick, until they were just really sick and couldn’t work they would rest … also to support our families, pay bills we have to work, if we don’t work, we don’t eat lunch or pay bills so you take the gamble and rely on God’s protection.

The City of Coachella says they recognized the risk these farmworkers are taking and passed an urgency ordinance requiring restaurants, agricultural operations, grocery stores, pharmacies to pay their employees “Hero Pay”, or an extra $4 an hour for 120 days starting February 10, 2021.

“We feel confident in our decision to enact the hero pay and to include farmworkers we know it was the right thing to do for our community, we know that farmworkers have earned this and deserve it  for being essential workers at all times not just during the pandemic but also for having born such burden and such risk during this pandemic,” says Coachella councilmember Megan Beaman Jacinto.

Mendoza says while he didn’t work in Coachella, many are getting the pay and he and his colleagues were grateful for the recognition, “We were happy.”

But several growers associations have teamed up and filed a lawsuit to stop it saying it’s an illegal ordinance, adding that the same laws don’t apply to foreign workers.

“We respect their beliefs as our bosses but we are sad the intentions the city had won’t be realized.” says Mendoza who fears the pay will be pulled.

Jason Resnick, senior vice president and general counsel with the Western Growers Association says that $4 an hour ends up being more like $6, on top of an average wage of $15 an hour, adding up to tens of millions of dollars, an industry hit hard by the pandemic cannot afford.

“Farmers are operating at a razor thin margins they’re already lost a lot of money during the pandemic, they’ve lost a lot of money due to ppe and other protective measures that have been put into place, so what’s the rational, there really isn’t one and the city should have not done this as an urgency ordinance and sprung it on the industry with no notice, they passed it and All of a sudden employers were faced with having to pay a major unbudgeted increase one that they cannot pass on to their buyers and they’ve already entered into contracts to sell their product at a certain price based on wages that they had anticipated paying,” says Resnick.

Resnick says this ordinance is not just unconstitutional but has put some farmers in impossible situations, “We’ve heard from farms who’ve have either not planted in the anticipation in the increased cost in harvesting that crop or are considering disking over that commodity because it will cost more to harvest it than they can get more after they factor in the increased cost, look this is an illegal ordinance.”

Christoper Pisano, the City of Coachella’s attorney says this is not unconstitutional and they’ve already been successful in similar hero pay ordinances for other cities, like Long Beach.

“This ordinance is constitutional, we think it’s not preempted by federal immigration law, we believe it was the right thing for the city and the city council to do to recognize the risk that farmworkers and other front line workers had to take on and are taking on still during the pandemic.”