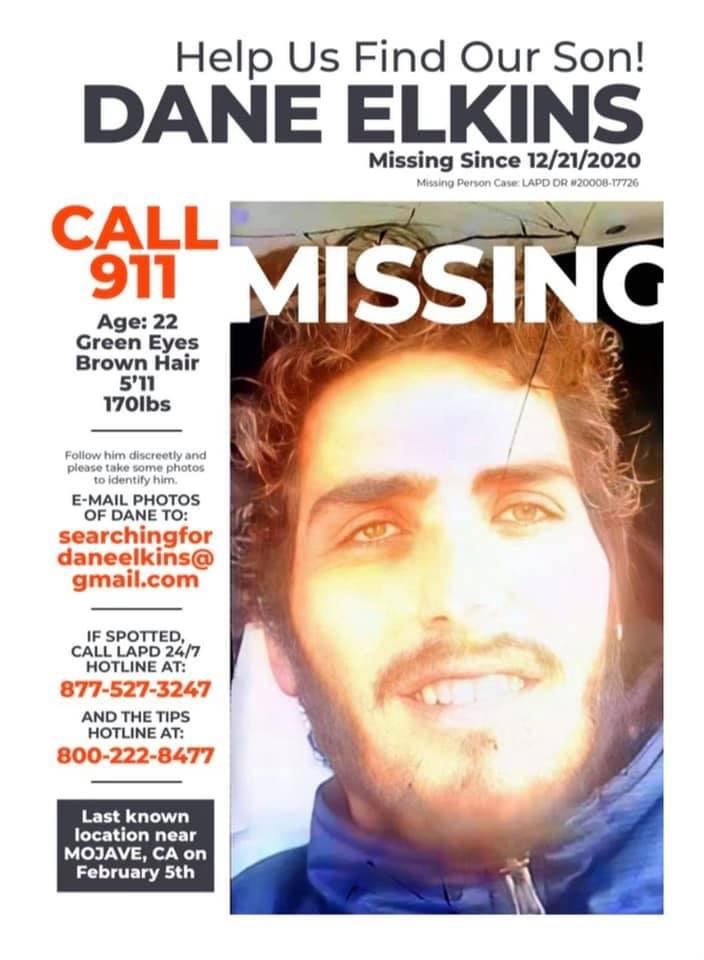 Twenty-two year-old Dane Elkins had everything going for him, a gifted student attending U.C. Santa Cruz and a world champion racquetball athlete.

His mom Deborah says the pandemic lock-down pushed her son over the edge, “He couldn’t go to school, and he couldn’t focus on the computer so he left school and then he couldn’t work out he couldn’t see his friends, he was locked down.”

The last time she spoke with her son he was driving home to their  home in Los Angeles from Santa Cruz. Dane pulled his car over near Castaic.

“He called 911 when they got there on December 21, his car was left there with his wallet, his phone, everything inside and he was not there and that was a really scary day,” says Deborah.

Since that day Deborah has been desperately searching for her son.

She’s created an online community to help find her son. Through social media several people have reached out with sightings, including a woman who says she say Dane in the Coachella Valley.

“‘I spoke to your son in Indio at Sloan’s Restaurant in Indio’ and Dane, just like in Mohave, he never asked them, asked the person for anything and they fed him,” she says.

This was so moving to her because she and Dane cared for homeless people together, “And he’d come to the market with me, pick up the food, take it to school, take it to hungry kids so it is surreal that I‘m looking for my son among the homeless.”

She’s asking people to take time to look at the faces many overlook in hopes they find her son and help bring him home.

She says those helping are keeping her going, “When people send me a picture and it’s not Dane I say, ‘it’s because of you it gives me hope reaching out to me sending me a picture because one day it is going to be Dane.'”

And if by some chance Dane sees this she wants him to know, his family is waiting for him with open arms, “Dane right now our hearts are broken but when we find you we are going to be whole again, we love you.”

If you think you spot Dane Elkins try to take a picture or video and send to his mom at searchingfordaneelkins@gmail.com or call the LAPD Hotline