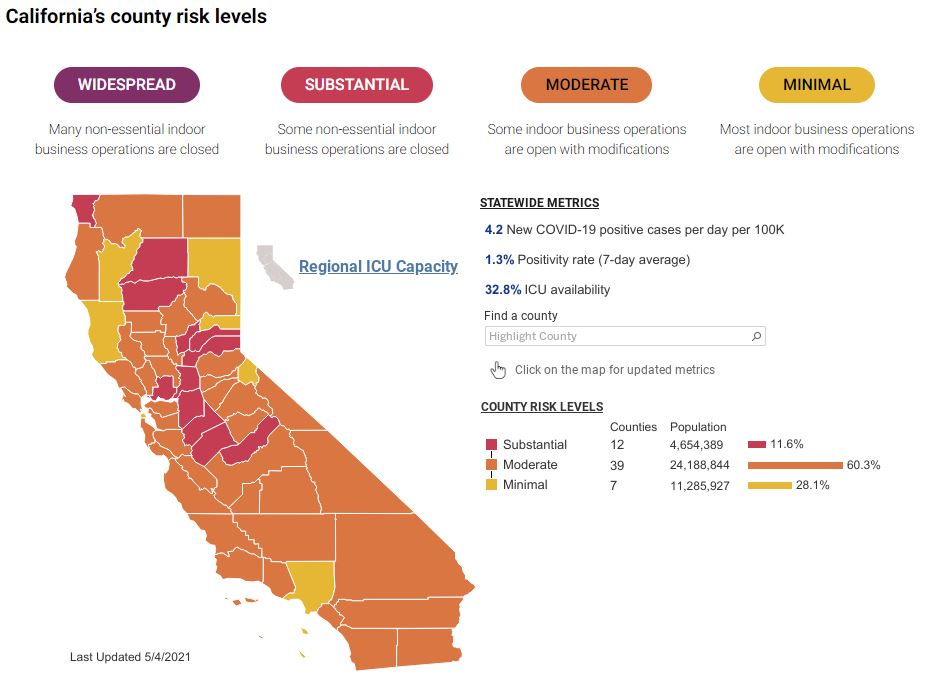 The rates of both new coronavirus cases and positive test results dropped in Riverside County, but not enough to see loosened restrictions for at least another two weeks, according to state data released Tuesday.

The coronavirus positivity rate is 1.9%, compared to 2.1% last week, according to the California Department of Public Health, which reported on Tuesday the county’s state-adjusted case rate was 3.4 per 100,000 residents. Last week, it was 3.9 per 100,000.

More county businesses opened three weeks ago amid lighter restrictions due to the county entering the orange tier of the state’s four- tier Blueprint for a Safer Economy. The county had been in the red tier since March 16, after five months in the most restrictive purple tier.

The next step is reaching the yellow tier — the designation with the least restrictions — which requires both a positivity rate less than 2% and a new-case rate of fewer than 2 per 100,000 residents. Both are based on rolling seven-day averages and must be sustained for two consecutive weeks.

Entering the yellow tier would allow higher attendance limits at most businesses. In some instances, the designation would double the attendance allowed under the orange tier.

Los Angeles is the only county in Southern California to advance to the yellow tier so far.

Meanwhile, Riverside County health officials reported 205 newly confirmed cases on Tuesday, along with a drop in hospitalizations and no new deaths.

According to the Riverside University Health System, the aggregate number of COVID cases recorded since the pandemic began in March 2020 is 298,777. There have been 4,574 confirmed COVID-related deaths in that time, the same number reported last Friday.

As of Tuesday, there were 68 people countywide hospitalized with coronavirus, 12 fewer than Monday. That figure includes 17 patients in intensive care unit beds, an increase of one from the previous day.

The number of known active virus cases countywide is 1,794, up 162. The active count is derived by subtracting deaths and recoveries from the current total — 298,777 — according to the county Executive Office. Verified patient recoveries countywide are at 292,409.

County Department of Public Health Director Kim Saruwatari told the Board of Supervisors last week that the current downtrend in virus cases points to gathering momentum toward recovery.

County Public Health Officer Dr. Geoffrey Leung was optimistic as well, telling supervisors that “we’re in a better place than a month ago,” though he cautioned “a lot of work” remains ahead.

Since December, the county has administered more than 1.6 million doses of the Moderna, Pfizer and Johnson & Johnson vaccines, according to RUHS. The latter one-dose immunization therapy was briefly suspended under a U.S. Food and Drug Administration advisory pertaining to negative reactions among a few patients. But the J&J product became available again a week ago.

The portal to make an appointment for a vaccine at county-run and other sites can be accessed here. Anyone who needs assistance may also call the county’s 211 help line.