Gubernatorial candidate, John Cox, will be in the Coachella Valley Wednesday as part of his “Meet the Beast Bus Tour.”

According to his team, Cox will, “make the case to recall Gavin Newsom, shake up Sacramento, and fix the problems caused by the Pretty Boy Governor.”

Cox will be at Castelli’s Restaurant in Palm Desert at 11:00 a.m.

His visit to the valley marks his ninth stop in his tour. 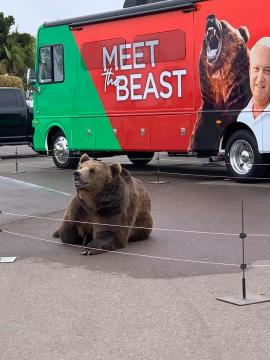 The republican businessman on Tuesday introduced himself as “the beast” to Newsom’s “beauty” alongside a live Kodiak bear at a Sacramento campaign event.

“Gavin’s mismanagement of California is inexcusable,” Cox says in his new ad as the bear ambles alongside him. “We need big beastly changes in Sacramento. I’ll make ’em.”

Though the recall election has not been officially called and no date has been set, a number of hopefuls have already pushed to get their names on the ballot.

In addition to Cox, who lost to Newsom by more than 20 points in 2018, the Democratic governor is being challenged on the Republican side by former San Diego Mayor Kevin Faulconer and former Olympian and reality TV personality Caitlyn Jenner.

Others include former adult-film star Mary Carey, who ran in the 2003 recall election. LA billboard star Angelyne has topped her recall candidacy website with an image of herself lying on a golden key while wearing a fuchsia bikini, opera-length black gloves and a feather boa draped along her ankles.