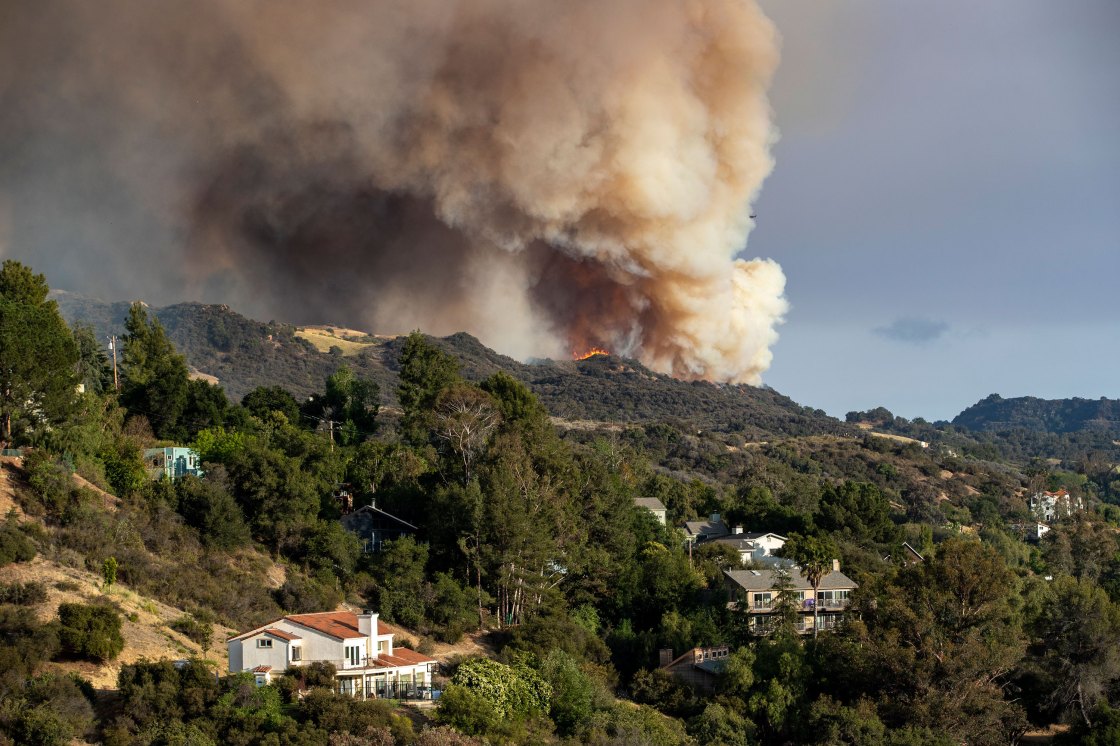 An arson suspect in custody is believed to be responsible for starting the uncontrolled Palisades Fire in Southern California that began over the weekend, Los Angeles Mayor Eric Garcetti said Monday.

The Palisades Fire has prompted ongoing evacuation orders and warnings in a zone about 20 miles west of downtown Los Angeles. The blaze is still 0% contained and has charred more than 1,320 acres since it was reported Friday.

One firefighter suffered a minor injury to his eye, the Los Angeles Fire Department (LAFD) said. No homes or other structures have burned.

Some drizzly rain in the area and an inversion layer have helped prevent the fire from spreading. That marine layer tends to trap heat, and Garcetti warned that once the clouds lift, typically in the afternoon, flames have the potential to take off rapidly.

California has been in a massive drought for weeks, and experts worry it will only get drier and hotter, creating the potential for another devastating wildfire season.

The LAFD had previously said there was a “suspicious start” to the fire, and on Saturday briefly detained and then released a different person. Fire Chief Ralph Terrazas expressed confidence Monday they had the correct suspect now in custody.

“It is an active investigation,” he said. “I can’t give you more details than that, but the person in custody — we feel we have the right person.”

More than 500 firefighters are combating the flames in a challenging canyon terrain that’s filled with 20-30 foot brush that hasn’t burned in about 75 years, Garcetti said.

Mandatory evacuations were ordered over the weekend for residents east of Topanga Canyon between the Community House and View Ridge, as well as everyone north of Entrada, south of Oakwood and east of Henry Ridge, the Los Angeles County Fire Department said on Twitter.

About 1,000 people had been evacuated from their homes by Sunday morning, Los Angeles City Fire spokesperson David Ortiz said. And on Sunday afternoon, the Los Angeles Fire Department issued an evacuation warning for additional homes, urging residents to be on standby.

“Gather your valuables, medicines etc and load them into your car so you are ready if asked to evacuate,” the department said.

Roughly 300 firefighters battled the blaze over the weekend, Ortiz said.

“There’s a lot of dense, thick material there, oily plants that have dried out because of the drought,” Ortiz said Sunday. “So, that’s our objective today: to try to keep it out of that and protect the communities and neighborhoods that are to the west of this fire because that’s what’s closest to it.”

Those drought conditions, coupled with the gusty winds the area is expected to see in the coming days, will likely pose some of the biggest challenges in containing the fire.