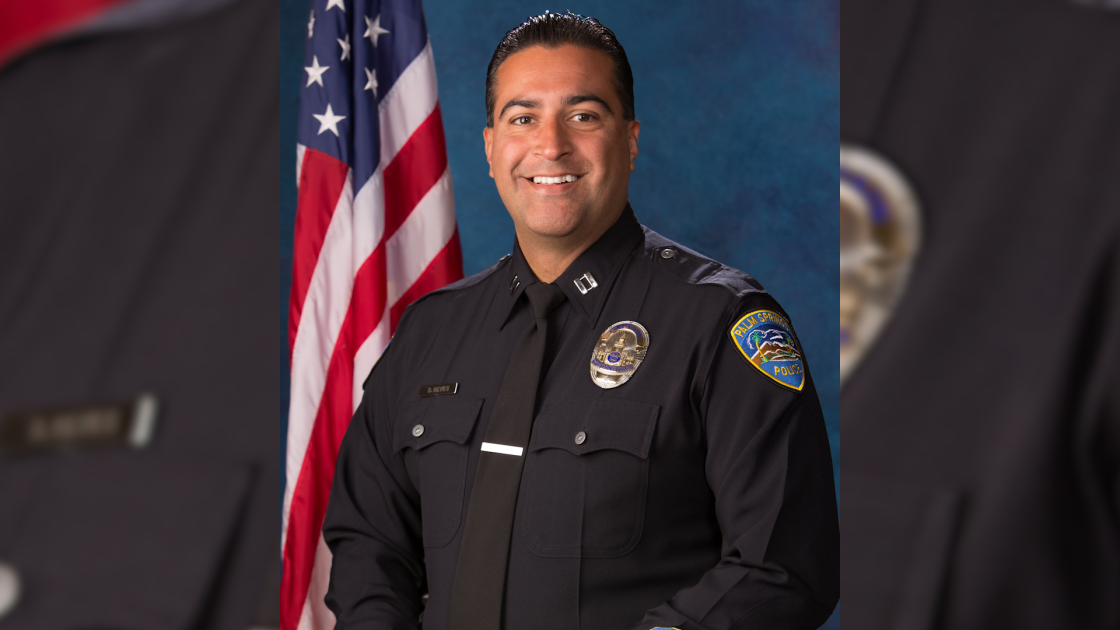 Chief of Police Bryan Reyes, a 27-year veteran of the Palm Springs Police Department, has announced that he will retire in August.

A veteran of the United States Marine Corps, Reyes was first hired as a patrol officer in 1993. After serving as an Officer, Detective, Sergeant, Lieutenant and Captain, he was appointed Police Chief in February 2016.

In order to ensure a smooth transition as the City begins an executive search for a new Chief of Police, Reyes will retire effective Aug. 23.

“Chief Bryan Reyes has led the Palm Springs Police Department exceptionally well these past six and a half years as Chief,” said Palm Springs City Manager Justin Clifton. “While I have only known him a short time, it is evident that he is a tremendous leader and somebody that provided the continuity, stability and vision for his team and our community. It’s nearly impossible to appreciate how rare, and how special, it is for someone of his caliber to commit 27 years to a community.”

Over the past six plus years some of Reyes’ major accomplishments include strengthening the department’s community policing in neighborhoods, expanding outreach and engagement with residents and businesses through Town Hall meetings, implementing new technology and social media platforms, and fostering trust and credibility through regular meetings with City neighborhoods, and Boards and Commissions such as Desert Highland Gateway Estates, LGBTQ Outreach Committee, Police Advisory Board, and the ONE-PS Neighborhood Organization. In addition, Reyes developed important partnerships with community and business organizations such as Palm Springs Unified School District, the Palm Springs Chamber of Commerce, Main Street Palm Springs, Boys & Girls Club of Palm Springs, Mizell Senior Center, Well in the Desert, Desert Regional Medical Center, and many more.

However, Reyes may be best known for his leadership during the first year of his tenure as Chief of Police in 2016, when two Palm Springs police officers, Lesley Zerebny and Jose “Gil” Vega, were tragically slain in the line of duty during an Oct. 8 officer-involved shooting. The tragedy plunged the officers’ families, friends, the Police Department, the Palm Springs community and the entire Coachella Valley into mourning. During this time of heartbreak, Reyes recognized the devastating impact the slayings had on the officers’ families — and on his own officers within the force — taking care to ensure their mental health needs were not forgotten.

His leadership during this difficult first year helped bring the community closer together and forge an even stronger relationship with the Palm Springs Police Department.

“This 27-year journey serving the residents of Palm Springs — and six and a half years as Chief of Police — has been challenging and incredibly fulfilling thanks to the talented and dedicated people I have worked for, worked with — and ultimately those I have been responsible to lead,” said Reyes. “It is with a great sense of pride and accomplishment that I announce my retirement from the City of Palm Springs, a community I am proud to say is one of the most welcoming and inclusive in the nation — with an exceptional quality of life thanks in large part to a force of outstanding police officers. It has been my honor and privilege to serve as Chief of Police and I thank the City Council, residents and staff for their support.”

“Chief of Police Bryan Reyes has shown extraordinary leadership overseeing the men and women of the Palm Springs Police Department,” said Mayor Christy Holstege, “His dedication to ensuring the safety of our community and incredible ability to engage with residents and businesses has been truly remarkable — and he will be greatly missed. On behalf of the citizens of Palm Springs, we thank him for an outstanding 27-year career serving our city and wish him the very best in retirement.”